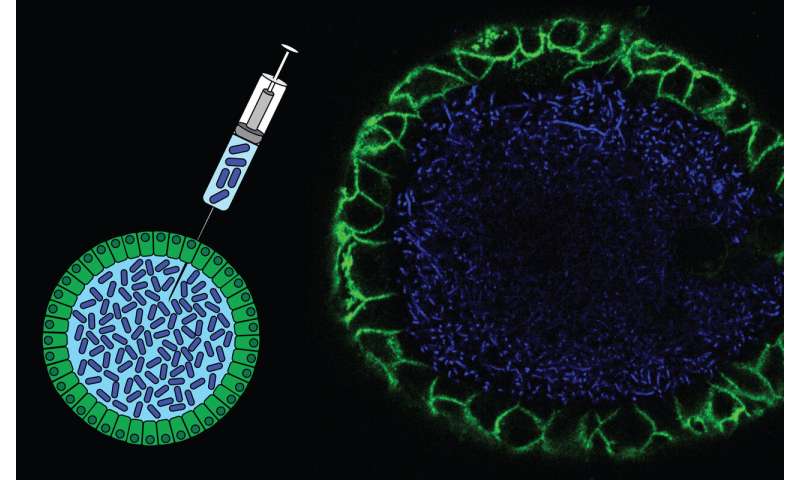 A common type of bacteria found in our guts could contribute to bowel cancer, according to research funded by a £20 million Cancer Research UK Grand Challenge award and published in Nature today.

Scientists in The Netherlands, the UK and USA have shown that a toxin released by a strain of E. coli causes unique patterns, or ‘fingerprints’, of DNA damage to the cells lining the gut.

The fingerprints were also seen in bowel cancer tumours, showing for the first time a direct link between the bacterial toxin and the genetic changes that drive cancer development.

The team suggests that detecting this specific DNA damage in the cells lining the gut could one day allow doctors to identify people at higher risk of the disease and become used alongside current bowel cancer screening tests.

Other bacterial toxins from gut bacteria might have similar effects and the hunt for them is now on as researchers seek to determine whether this mechanism of DNA damage is widespread.

There are around 42,000 new bowel cancer cases in the UK every year, where it remains the second most common cause of cancer death. Understanding the early triggers that could lead to bowel cancer may help doctors prevent its development and detect it at its earliest stage, when treatment is most likely to be successful. This has led scientists to investigate the role that the microbiome—trillions of bacteria, viruses, fungi and other single-celled organisms—plays in the development of bowel cancer.

Professor Hans Clevers and his team at the Hubrecht Institute in The Netherlands focused on one strain of E. coli producing a toxin called colibactin, and which is more often present in the stool samples of people with bowel cancer compared to healthy people. Because colibactin can cause DNA damage in cells grown in the lab, they thought the toxin might be doing the same to cells lining the gut.

The team used human intestinal organoids, miniature replicas of the gut grown in the lab, and exposed them to colibactin-producing E. coli. They analysed the DNA sequence of the gut cells in the organoids after 5 months and found about double the DNA damage in them, compared to organoids exposed to ‘regular’ E. coli that didn’t produce the colibactin.

The researchers also found that the DNA damage caused by colibactin followed two very specific patterns—like fingerprints—which were unique to the toxin.

To determine whether the DNA damage caused by the bacterium played a role in bowel cancer, the researchers then analysed the DNA sequences of more than 5500 tumour samples from the UK and Netherlands, with the help of Dr. Henry Wood and Professor Philip Quirke from the University of Leeds.

First, they checked for the two colibactin DNA damage fingerprints in over 3600 Dutch samples of various cancer types. The fingerprints were present in multiple tumours, and much more often in bowel cancers than other cancer types. 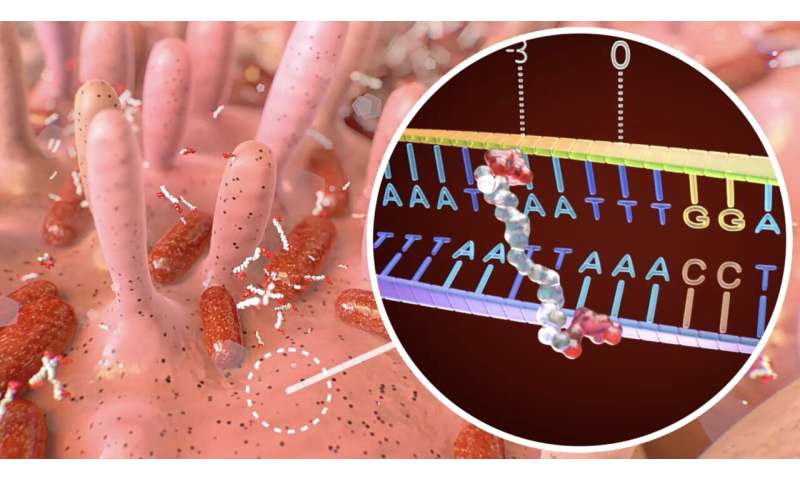 The researchers then refined their investigation on bowel cancer tumours specifically, and analysed over 2000 bowel cancer samples from the UK, collected as part of the 100,000 Genomes Project run by Genomics England. Among these samples, the colibactin fingerprints were present in 4-5% of patients. This suggests that colibactin-producing E. coli may contribute to 1 in 20 bowel cancer cases in the UK. It will be up to further studies to shed light on just how much of a role the toxin could play in these cases, and what other components of the microbiome may be involved in the early stages of bowel cancer.

Professor Hans Clevers, Grand Challenge co-investigator at the Hubrecht Institute, said: “Things like tobacco or UV light are known to cause specific patterns of DNA damage, and these fingerprints can tell us a lot about past exposures that may have caused cancer to start. But this is the first time we’ve seen such a distinctive pattern of DNA damage in bowel cancer, which has been caused by a bacterium that lives in our gut.”

Further down the line, the researchers say that looking for DNA damage fingerprints like the ones associated with colibactin in the cells of the gut lining could be used to identify those who are at a greater risk of developing the disease.

Professor Philip Quirke, Grand Challenge co-investigator at the University of Leeds, said: “Our goal is to understand the causes of bowel cancer, so discovering the role of colibactin represents an important step. As a Grand Challenge team, we are now looking at other bacteria and their toxins associated with bowel cancer, and we hope to identify more DNA damage fingerprints to paint a better picture of risk factors.

We will then need to work out how we can reduce the presence of high-risk bacteria in the gut. But this is all in the future, so for now people should continue to eat a healthy diet and participate in bowel cancer screening.”

John Barnes, patient advocate for Grand Challenge said: “As a cancer survivor, I don’t want others to go through what I’ve gone through. Catching bowel cancer at an earlier stage while it’s still treatable has the potential to save thousands of people’s lives. This brilliant research gives me hope that people may not have to suffer from bowel cancer in the future.”

Nicola Smith, senior health information manager at Cancer Research UK, said: “The more doctors understand about how bowel cancer develops, the better they will be at detecting it and helping people reduce their risk.

“But there are already things that people can do right now to help reduce their risk of bowel cancer. Not smoking, keeping a healthy weight, eating a diet high in fibre and low in red and processed meat will all help. And for those who are eligible, participating in bowel screening can help to detect the disease at an early stage.”