Breast cancer screenings missed by 1.5MILLION women in England last year as figures show one in four did not turn up to their vital check

Uptake of the screening programme for 2018/19 was just 71.1 per cent, meaning more than a quarter of women did not turn up.

That is a slight improvement on the previous year – which saw uptake at an all-time low of 70.5 per cent.

But is far short of the 80 per cent ‘achievable’ level NHS bosses are aiming for. 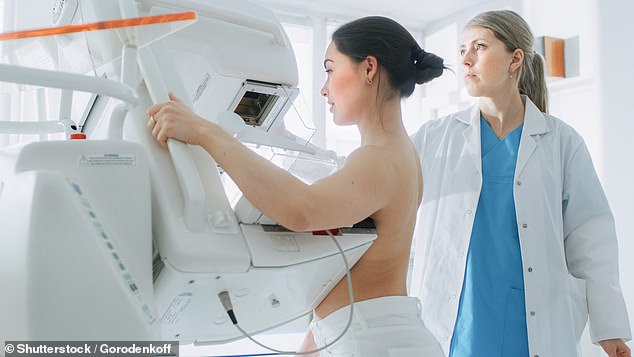 All women aged 50 to 70 are invited for screening every three years – and in some parts of the country the tests start at an earlier age and extend beyond 70.

Although some women who miss their test go in subsequent years, the new statistics show 25.4 per cent of women have gone more than three years without a mammogram and are now overdue a test.

The figures, released yesterday by NHS Digital show out of the 6.07million women eligible for screening last year, 1.54million have not been tested for three years.

Experts say the NHS has simply not made it easy enough for women to attend their mammograms.

‘It is particularly troubling given that one in seven women will be diagnosed with breast cancer in their life time.

‘The importance of catching breast cancer early cannot be underestimated and mammograms are the main way this is currently done.’ She added: ‘Women do not attend screenings for a number of reasons, which all need addressing urgently.

WHO IS ELIGIBLE FOR BREAST CANCER SCREENING AND HOW DOES IT WORK?

What is breast cancer screening?

Screening is a procedure which allows doctors to catch breast cancer while it is still in its infancy and therefore easier to treat.

It involves an X-ray test – known as a mammogram – to check for signs of cancer which are too small to see or feel.

The results of the mammogram will be sent to the women and her GP within two weeks. Around 5 per cent will be called back for further tests.

Any woman concerned that they might have breast cancer can see their GP and be referred for a screening.

But in recognition that the risk of getting breast cancer increases with age, all women aged between 50 and 70 who are registered with a GP should automatically be invited for screening every three years.

Women are first invited for screening between their 50th and 53rd birthday, although in some areas they are invited from age 47 as part of a trial.

How are they invited?

The screening process is overseen by Public Health England, which uses an IT system to send out invitations.

‘All too often, appointments are only offered during working hours, which acts as a barrier to access for a significant part of the population.

‘It’s vital that women can fit screenings around their busy lives and extending these hours would be a step in the right direction.’

A major review of cancer screening published in October suggested women should be offered lunchtime mammograms near their workplace to rescue screening rates.

Sir Mike Richards, the former national clinical director for cancer, who led the review, said at the time: ‘Every day of delay is a missed opportunity to catch a person’s cancer or disease at an earlier point, and potentially save their life.’

He called for appointments to be made far more convenient – pointing to research which suggests half of those who do not attend screening fully intend to get tested, but simply do not find the time or forget to attend.

Studies have estimated that routine screening cuts breast cancer deaths by up to 40 per cent, saving 1,300 lives a year in England.

Breast cancer is the most common type of female cancer in the UK, with 55,200 women diagnosed each year, the majority of them over 50.

Baroness Delyth Morgan, chief executive at the Breast Cancer Now charity, said: ‘It’s promising that uptake of breast screening in England has improved slightly after reaching a decade-low last year and we hope this now continues.

‘But screening uptake is still barely above the minimum target, with hundreds of thousands of women across the country not attending.

‘The NHS Breast Screening Programme is vital in ensuring that breast cancer is detected at earlier, more treatable stages.

‘It prevents 1,300 deaths from breast cancer each year and initiatives to help more women make breast screening a part of their lives need to be a priority.’

She added: ‘It’s now essential that the recent NHS screening review’s recommendations to increase the number of women attending are implemented as soon as possible and supported through Government investment.

‘This includes tried and tested schemes such as text reminders and social media campaigns to raise awareness and spread the message about the importance of screening.’