October was the worst month ever for A&E waiting times in England, NHS figures revealed today.

Just 83.6 per cent of patients were seen within four hours, a record low which meant 320,000 people sat for longer while medics decided what to do with them.

Figures this year have shown the NHS is not having crises in the winter and recovering over summer but is under immense strain all year round.

Five of the 10 worst monthly performances on record have all been this year and even those for May, June and July were worse than autumn months in 2018.

And data for September showed the number of people waiting for routine surgery is at a record high for the sixth time this year, with 4,420,000 people on the list.

Doctors have warned the country’s emergency care is ‘imploding’ and that no political parties have credible plans to rescue it. 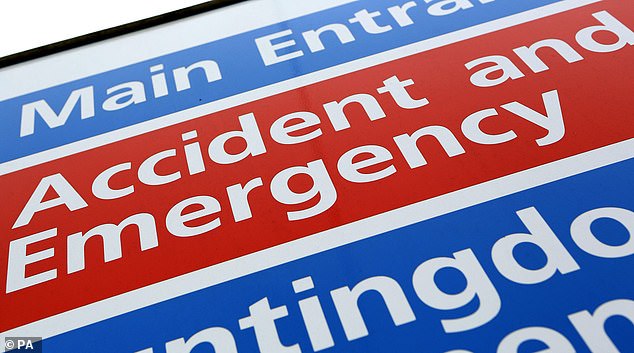 A&E departments are now facing pressure all year round, not just in the winter, as figures reveal patient numbers are increasing and hospitals are struggling to treat patients within time targets (stock image)

Dr Nick Scriven, of the Society for Acute Medicine, which represents emergency medics, said: ‘These figures are truly worrying as we haven’t even reached the “traditional” winter period yet.

‘We have heard so many ‘announcements’ over the last few weeks of half-baked projects that require either thrice promised money or are totally uncosted for the real world.

‘With what we have seen with the critical incident over A&E pressure in Nottingham last week – and that is just the tip of the iceberg – this, to me, is simply the reality of the constant warnings made by experts now coming to fruition.’

Nottingham University Hospitals Trust last week declared a ‘critical incident’ and started cancelling operations because it was so overloaded with sick people.

The Labour Party’s shadow health secretary, Jonathan Ashworth, said: ‘The Conservatives have ushered in the worst NHS crisis on record.

‘Under Boris Johnson the NHS is in crisis and we’re heading for a winter of abject misery for patients.

‘Our A&Es are overwhelmed, more so than ever. In every community there’s an ever growing queue of people waiting for treatment.

‘The Tories spent a decade cutting over 15,000 beds. Now they should apologise to every patient languishing on a trolley and waiting longer for treatment.’

The A&E performance figures come as the NHS is trialling completely scrapping the four-hour target – which it consistently fails to hit – in favour of more relaxed goals.

This system aims to prioritise the most ill patients and be more lax about less urgent cases, and is being tested at 14 hospitals in England.

There are now 4.42m people waiting for planned treatment, which may include hip or knee replacements or cataracts.

That figure was 3.83million in September 2017 – a rise of more than half a million people in two years because hospitals can’t process the patients fast enough.

A spokesperson for NHS England said: ‘These figures show that while NHS staff are looking after a markedly higher number of older and sicker patients, a higher number of patients are being seen quickly than a year ago.

‘While hospitals will be opening more beds over the coming weeks, the public also have a role to play going into winter, and can help doctors, nurses and other staff by getting their flu jab, and by using the NHS 111 phone or online service as a first port of call for non-emergencies.’