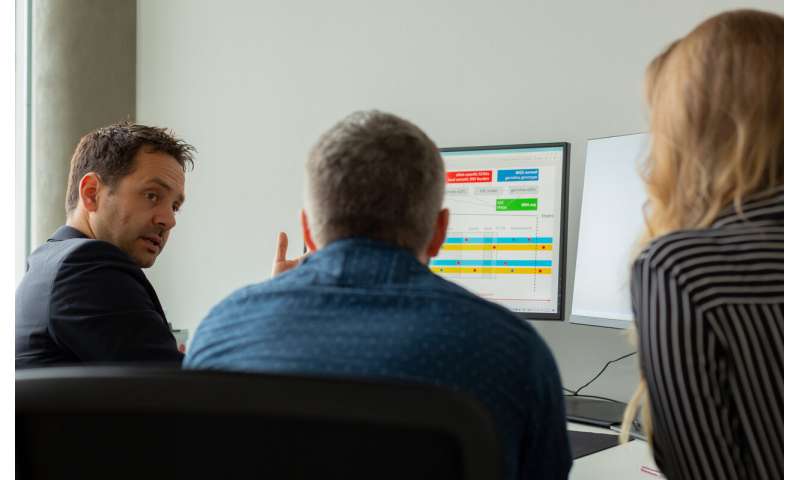 No two tumors are alike. That’s why two people with the same kind of cancer can react very differently to the same medicine. In one the tumor gets smaller, in another the degenerated tissue remains unaffected. Usually this is due to genetic variations in the individual cancer cells.

In order to understand these variations in detail and better adapt therapies to the individual needs of patients in the future, an international team of more than 1,500 scientists—the Pan-Cancer Analysis of Whole Genomes (PCAWG) consortium—decided several years ago to trace the common mutation patterns in the genomes of about 3,000 cancer patients. The donated tissue samples included tumors of the liver, pancreas, brain, and 17 other organs.

PCAWG researchers used data from the International Cancer Genome Consortium (ICGC) and The Cancer Genome Atlas (TCGA) for their project. Participants in those groups had already completely sequenced the genomes and transcriptomes, that is the entire set of RNA molecules, of 1,188 degenerated tissue samples.

“Thanks to PCAWG, not only have the parts of genomes containing the blueprints for proteins from such a large number of patient samples been studied for the first time, but so have the regulatory sequences of DNA that control the expression of genes,” says Dr. Roland Schwarz, head of the Evolutionary and Cancer Genomics Group at the Max Delbrück Center for Molecular Medicine (MDC) in the Helmholtz Association. Schwarz is one of seven senior authors of the study in the current issue of Nature. This publication is the main paper of PCAWG Working Group 3 “Integration of Transcriptome and Genome.” Two scientists from Schwarz’s own research group at the Berlin Institute for Medical Systems Biology (BIMSB) at the MDC—Dr. Matthew Robert Huska and Julia Markowski—also contributed to the paper.

“In our work, we and our colleagues systematically studied a variety of RNA alterations and identified mutations on the DNA level that cause these RNA alterations,” Schwarz explains. Cancer-specific alterations on the RNA level have long been known. “Genes often get overexpressed in tumors, causing the formation of more RNA,” says Schwarz. “Or there are gene fusions or modifications in splicing, an important step in the formation of RNA.” In total, the PCAWG publishes more than 20 studies simultaneously in Nature, Nature Genetics, Nature Communications, Nature Biotechnology and Communications Biology.

Structural alterations in the genome play a decisive role

Until now, however, it has been rather unclear which DNA mutations are caused by the known RNA alterations. The work done by Schwarz and 49 other researchers has filled a significant gap in geneticists’ understanding of carcinogenesis.

“An especially important focus of our work at the MDC has been on the interplay between selective DNA mutations and structural alterations, such as gene copy number variants,” Schwarz reports. “Our cells normally contain two inherited copies of each and every chromosome, a maternal and a paternal allele.” In cancer cells, the number of copies is often much higher, or entire segments of the genome have gone missing.”

Using high-performance computers and cloud computing, Schwarz and his team have found out that such alterations in copy number play a decisive role in the altered gene expression of cancer cells. “By analyzing the DNA sequences of the entire genome, we have been able to accurately determine how copy number variants work together with point mutations—and what influence this in turn has on the expression of a specific parental allele,” Schwarz explains.

Schwarz hopes that the work he and his colleagues are doing will significantly improve our understanding of gene regulation in tumors. “Our study will certainly lay the foundation for further research that will help us to become more familiar with the genetic heterogeneity of tumors,” he says.