Women who drink just two cups of milk a day may be at an 80 per cent increased risk of breast cancer, a major study suggests.

The NHS recommends adults consume lots of cow’s milk because it is rich in protein and calcium, while current US dietary guidelines advise three cups of milk per day.

But researchers from the Loma Linda University in California say these recommendations should be ‘viewed with caution’.

They looked at 53,000 women over eight years and found consuming even a small amount of milk every day was linked to a spike in the prevalence of breast cancer.

A third of a cup, the equivalent of a small latte, was associated with a 30 per cent increased risk, while for a full cup a day (240ml) it was 50 per cent.

For those drinking two to three cups per day, it soared to between 70 and 80 per cent.

While the study was an observational one and cannot prove a cause, scientists believe a hormone present in cow’s milk may be to blame. 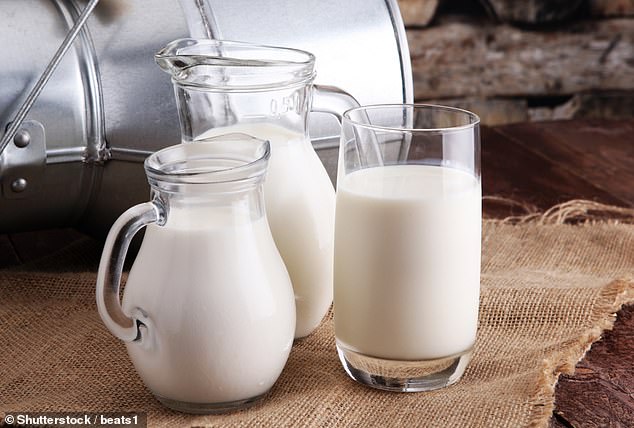 A major study of more than 400,000 people suggested that consuming more milk, cheese and yogurt can cut the risk of the most common type of stroke. Eating dairy may reduce the likelihood of suffering a stroke in later life, researchers say

Insulin-like growth factor (IGFD-1) has been suggested in previous studies to promote the key stages of tumour development.

Breast cancer is the most common form of the disease in the UK and US, blighting the lives of around 55,000 British women every year and 276,000 Americans.

In the latest study, the eating habits of nearly 53,000 North American women were evaluated, all of whom were initially cancer-free and followed over eight years.

A major study by Oxford University in February found eating cheese, yoghurt and milk may reduce the likelihood of suffering a stroke in later life.

They studied 400,000 people to come to the conclusion.

For every extra glass of milk those studied drank a day, the risk of an ischaemic stroke caused by a blood clot fell by 5 per cent, and it dropped by 9 per cent for every small pot of yogurt.

The results, however, cast doubt on ‘going to work on an egg’, as those who ate more eggs were more likely to have a rarer haemorrhagic stroke.

Researchers looked at what people from nine European countries said they ate over a typical year.

The most significant results showed that those who ate lots of fibre, along with fruit and vegetables, were significantly less likely to have a stroke.

But the study also suggests dairy foods may be important, although opinion is divided on this since their high saturated fat content has been said to make the food group bad for the heart.

Women filled out food frequency questionnaires multiple times a week and recalled what they ate on every day.

They also answered questions about their family history of breast cancer, medication use, breast cancer screening and underlying medical conditions.

By the end of the study period, there were 1,057 new breast cancer cases during follow-up.

There was no difference in cancer risk between full fat versus reduced or non-fat milks, all three spiked the disease’s prevalence.

The research found no association between dairy-free milk alternatives such as almond, oat or soy milk and cancer.

Lead author Gary Fraser, professor of cardiology and nutrition at Loma Linda, said: ‘Dairy foods, especially milk, were associated with increased risk, and the data predicted a marked reduction in risk associated with substituting soy milk for dairy milk. This raises the possibility that dairy-alternate milks may be an optimal choice.

‘Consuming as little as a quarter to a third cup of dairy milk per day was associated with an increased risk of breast cancer of 30 per cent.

‘By drinking up to one cup per day, the associated risk went up to 50 per cent, and for those drinking two to three cups per day, the risk increased further to 70 per cent to 80 per cent.

‘Evidence from this study suggests that people should view that recommendation [of drinking three cups a day] with caution.’

The study could not prove a strong enough association between women who ate lots of cheese and yoghurt.

WHAT IS BREAST CANCER, HOW MANY PEOPLE DOES IT STRIKE AND WHAT ARE THE SYMPTOMS?

What is breast cancer?

Breast cancer develops from a cancerous cell which develops in the lining of a duct or lobule in one of the breasts.

When the breast cancer has spread into surrounding breast tissue it is called an ‘invasive’ breast cancer. Some people are diagnosed with ‘carcinoma in situ’, where no cancer cells have grown beyond the duct or lobule.

Most cases develop in women over the age of 50 but younger women are sometimes affected. Breast cancer can develop in men though this is rare.

Staging means how big the cancer is and whether it has spread. Stage 1 is the earliest stage and stage 4 means the cancer has spread to another part of the body.

The cancerous cells are graded from low, which means a slow growth, to high, which is fast growing. High grade cancers are more likely to come back after they have first been treated.

A cancerous tumour starts from one abnormal cell. The exact reason why a cell becomes cancerous is unclear. It is thought that something damages or alters certain genes in the cell. This makes the cell abnormal and multiply ‘out of control’.

Although breast cancer can develop for no apparent reason, there are some risk factors that can increase the chance of developing breast cancer, such as genetics.

What are the symptoms of breast cancer?

The usual first symptom is a painless lump in the breast, although most breast lumps are not cancerous and are fluid filled cysts, which are benign.

The first place that breast cancer usually spreads to is the lymph nodes in the armpit. If this occurs you will develop a swelling or lump in an armpit.

How is breast cancer diagnosed?

If you are confirmed to have breast cancer, further tests may be needed to assess if it has spread. For example, blood tests, an ultrasound scan of the liver or a chest x-ray.

How is breast cancer treated?

Treatment options which may be considered include surgery, chemotherapy, radiotherapy and hormone treatment. Often a combination of two or more of these treatments are used.

How successful is treatment?

The outlook is best in those who are diagnosed when the cancer is still small, and has not spread. Surgical removal of a tumour in an early stage may then give a good chance of cure.

The routine mammography offered to women between the ages of 50 and 70 mean more breast cancers are being diagnosed and treated at an early stage.