Warning for 2 million weed-smoking heart patients: Marijuana may boost statin and blood thinner levels to dangerous levels and cause the SAME cardiovascular damage as cigarettes

More than two million Americans with heart disease are using or have used marijuana – and it could put them at risk of dangerously heavy bleeding and other complications, a new study warns.

With medicinal marijuana now legal in 33 states, more and more Americans – especially those with chronic health issues – are using it to help ease their pain and nausea.

But research on the drug’s health effects is fairly nascent, and researchers at Brigham and Women’s Hospital worry that cannabis could spell disaster if combined with drugs like statins, commonly prescribed to help manage the condition.

Plus, they note, smoking weed has many of the same cardiovascular effects as smoking cigarettes and cannabis use has been linked to higher rates of a variety of heart issues. 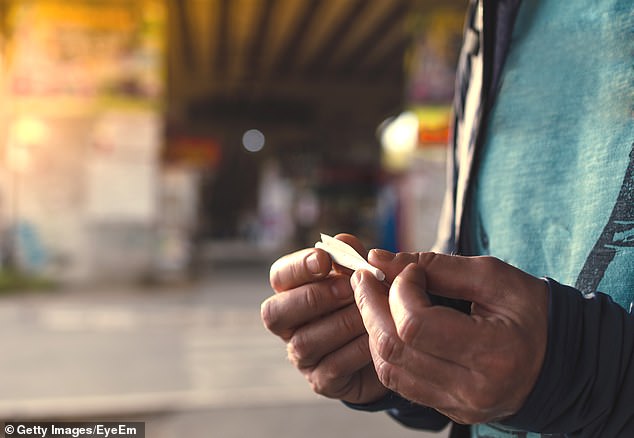 Marijuana is legal to use to treat chronic pain from conditions including heart disease – but the drug may be dangerous to patients on statins or blood thinners, a new study warns

Quelling nausea, easing pain, aiding sleep, calming anxieties; these are just a few of the purported uses of marijuana.

Most states dictate that marijuana can be ‘prescribed’ for wasting, nausea and severe or chronic pain from any a ‘chronic or debilitating disease.’

That leaves open a nearly limitless set of diseases, without specific guidance for each disease in question.

Cardiologists at Brigham and Women’s Hospital say that’s an issue when it comes to patients with cardiovascular problems.

Among the most common signs that someone has coronary artery disease is chest pain, a symptom for which medical marijuana might well be prescribed.

But most Americans that use marijuana – including those with medical cards for it – smoke the drug, rather than ingest it in any other form.

And a number of studies, including those collected in the new review, published in the Journal of the American College of Cardiology, indicate that smoking cannabis has the same effects on the cardiovascular system as smoking does.

Smoking – whether cigarettes or a joint – speeds up the heartbeat, raises blood pressure, diminishes the blood flow to the heart and amount of oxygen that reaches the rest of the body, damages the integrity of blood vessels and increases blood clot risks.

EDIBLE MARIJUANA IS SAFER BUT COULD GIVE YOU A LONGER, STRONGER HIGH THAN SMOKING IT

Though they come from the same plant, each marijuana product reacts differently in the body based on how it is heated.

At this temperature, the burning plant releases carcinogens (though far fewer than come from a cigarette) and smoke that constricts blood vessels and can damage the lungs.

The heat also changes the psychoactive component of the plant, THC, from THCA to Delta-9THC.

This new form of THC makes its way to receptors in the brain within five to 10 minutes, typically. The effects fade within 60 to 120 minutes.

Weed edibles are made by dissolving THC into a fatty substance, typically oil or butter, and cooking the snack at about 300 degrees Fahrenheit.

At that temperature, both Delta-9THC and another psychoactive compound are released.

The result is a less carcinogenic, but more potent drug.

The food has to be processed by the liver, an extra step that delays the onset of a high, which makes it hard to control.

The body also keeps metabolizing the edible, making the effects of THC last far longer – sometimes as long as 10 hours.

Stroke risks are also twice as high among even young people who are heavy marijuana users.

Recent research has suggested that the cardiovascular effects of vaping are much the same as those from smoking combustible forms of either tobacco or marijuana as well.

That’s particularly problematic for heart disease patients, some of whom take blood thinners to guard against their elevated risks of blood clots and others who take statins to reduce cholesterol in their blood.

Marijuana and statins, for example, rely on some of the same liver enzymes to break them down, and the attempt to do so can lead to higher levels of statins in the blood.

This can damage the liver and muscles and potentially even raise risks for a rare, but life-threatening condition called rhabdomyolysis, muscle damage that can occur was a result of a statin overdose.

In their review , the researchers also found that marijuana was linked to a boost in levels of blood thinners like warfarin.

An excess of blood thinners in the blood may prevent the blood from clotting when it needs too, making it possible for excess bleeding to occur.

And the risks of any of these problems are only going up, noted Dr Vaduganathan.

‘We also know that marijuana is becoming increasingly potent,’ he said.

‘Our review suggests that smoking marijuana carries many of the same cardiovascular health hazards as smoking tobacco.

‘While the level of evidence is modest, there’s enough data for us to advise caution in using marijuana for our highest-risk patients, including those who present with a heart attack or new arrhythmia, or who have been hospitalized with heart failure.’