'Have you tried yoga?" is a predictable response to any number of troubles ranging from stress, anxiety and sleeplessness to back pain and depression. It is an effective way to build strength, flexibility and balance. Over the years I've absorbed these messages and now faithfully turn up to a couple of classes a week. Which I highly recommend because, when it goes well, it's the perfect antidote to the demands of modern life.

The problem is when what should be the calmest moments of my week turn into the most stressful. I thought maybe it was just me, but chatting to others I've discovered that being made psychotically furious by yoga is more common than you would expect. Especially in January, when the New Year Resolvers turn up in hordes. 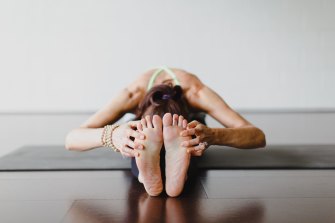 The sources of that rage vary, but may include some of the following:

People who arrive late to class, apologising noisily so no one can ignore them and expecting the rest of the class, having already started, to stop and move their mats to fit them in. The calm of the room is undone as meticulous arrangements to ensure sight lines to the teacher are disrupted and people can't see what they're trying to do. My absolute favourite moment being the time a latecomer spotted an empty mat at the front and jumped on it triumphantly. Only for the awkward moment as the teacher returned from her circuit of the room and they both realised the pupil was now perched on the instructor's mat and neither had any idea how to escape this situation.

Those who ignore the advice on breathing and spend the class sounding like a three-year-old coming down from a howling tantrum. Often, it's the ripped gym-regulars who've been advised to try yoga by their personal trainer because of a recurring injury. They stride in with "bored already" faces and smirk at the gentle warm-up before jamming themselves into the most difficult versions of every pose. Then they start to sweat and shake, glaring at the teacher and the 75-year-old who still has a jumper on, all while breathing so dramatically that no one else can concentrate. Some then crash out of the room, the worst waiting until the final relaxation.

Personal awareness is a pretty big deal in a room packed with sweating strangers. Yet avoidance of deodorant, rancid trainers thrown near other peoples' mats, alarmingly rotten feet, killer hangover farts (doing a lot of twists is a risk) and men's baggy shorts that reveal their contents to anyone unlucky enough to be behind them are troublingly common.

I love my yoga teachers, but a few are just too optimistic about what you can do or how much pain you signed up for. Someone smiling brightly while adjusting you "deeper" into a pose that feels as if your muscles will explode can lead you to wonder if you'll vomit and why you're paying them for this feeling. But, of course, you are far too polite to say this and so grit your teeth and spend the rest of the class avoiding eye contact in case they come back to you and do it again.

These scuttle in as soon as the door opens after the last class, jumping past any number of people who have been patiently queuing to "bags" the best spot and take up loads of floor space. The worst have their hair in a towel turban and make a complex nest with half a dozen other towels and two Pilates mats, as if expecting a massage. They spend the class in a frantic anxiety, slipping on the wrong mats, rearranging their towels and taking up ever more space until they get so stressed they pick up the phone they've left by their mat and read a stream of incoming messages.

Fresh from three months at an eco-ashram in India and wearing harem pants, they take the class incredibly seriously, adding in their own variations and going beyond whatever the teacher has suggested because, if you've learnt how to do an incredible bird of paradise, everyone is damn well going to admire it. I often love these, actually, as they look inspiringly elegant. But on a bad day their sheer competence can be demoralising and you can't help but wish they'd do their handstands discreetly at the back.

Surely the most annoying of all: they know each other, have their usual places and glare at anyone foolish enough to try to take them. They get the best mats and equipment before it goes, and know what the teachers will say before they form the words. They exchange micro-glances, watching the room to see which January newbies will stay the course until next Christmas and which will vanish so the class can return to its normal size and vibe. Namaste.