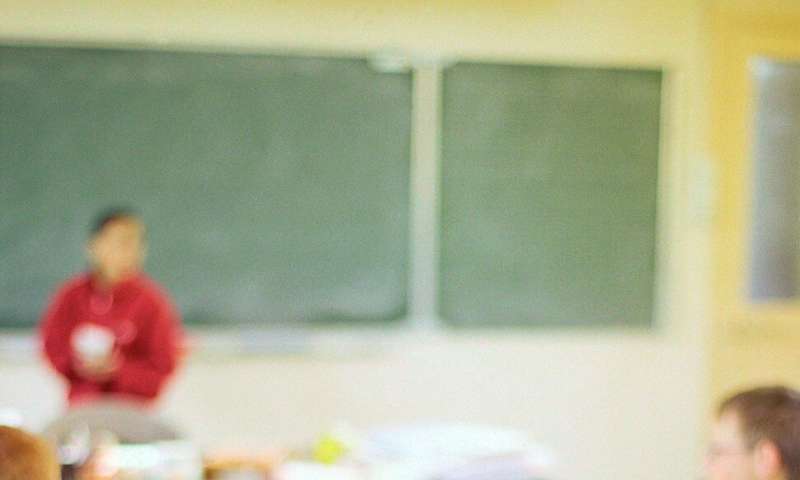 It is well known that children who have parents with a short education perform worse in school and more often have symptoms of ADHD and depression than other children do. In this new study, researchers wanted to find out why—is the difference due to genetic vulnerability or certain environmental factors?

“It is probably not the level of education that affects the children, but rather the social and economic conditions that result,” states Fartein Ask Torvik, researcher at the Norwegian Institute of Public Health and main author of the study.

In total, adults and children from more than 28,000 families participated in the study. The parent generation included both single and identical twins, as well as full and half siblings. This helped researchers study the impact of genetic factors that parents and children share on the risk of the next generation of almost 35,000 eight-year-olds who were included in the family analyses.

If neither parent had completed upper secondary school, one in five children had high levels of ADHD symptoms, compared to just under one in 20 children in families where both parents had college or university education. When researchers took into account genetic and environment factors shared by parents and children, they found that parental education still had a strong effect on ADHD symptoms.

Boys had more symptoms of mental disorders and experienced problems at school more often than girls did.

“The results mean that parental education level can be interpreted as a contributing factor as to whether or not children develop ADHD symptoms and / or problems at school,” says Torvik.

Alternative explanations could have been that ADHD recurs in some families, and that these families tend to have short education, or that parents and children share environmental conditions, such as their neighbourhood. However, researchers in this particular study could take into account both the inherited risk of mental disorders and the risks in the shared environment, indicating that education plausibly produces a causal effect.

“It is also interesting that the effect of the father’s education is as strong as the mother’s education. Most previous studies have not looked at both parents’ education. People who have children together often have a similar education level, which in itself could lead to increased social inequality,” Torvik explains.

The researchers also found a gradient between education levels, where the children’s problems declined with longer parental education.

“Factors related to the parents’ level of education must in some way have an impact on children’s living conditions. We do not know exactly which conditions are important but it may be due to family finances, stress, lifestyle or understanding of the children’s needs,” says Torvik.

“These factors can affect how much time and energy parents have to follow up children who need extra support, or the ability to get proper follow-up from public services.

“Of all the factors that affect mental health, social background is one of the most important. Many people probably think that social inequality is smaller in Norway than in other countries but the social differences in mental health are extensive,” he adds.

“Based on this study, we cannot conclude which interventions are working. Other types of studies are necessary before we can comment. Our goal is to understand the causes of mental disorders and social exclusion,” says Torvik.

34,958 children from 28,372 families participated. The children and parents are participants in the Norwegian Mother, Father and Child Study (MoBa). The mothers completed a questionnaire about parental education and child upbringing when the children were 8-years-old. This included questions about school problems and symptoms of ADHD and depression.