For decades, eggs have been thrown by both sides of the "is cholesterol good?" debate.

There is the egg whites-only brigade, with comical claims such as eating an egg a day being the equivalent of smoking five cigarettes. Then there are the so-called cholesterol deniers, who advocate a high-fat and low-carb diet, arguing cholesterol – and eggs – are not the problem. 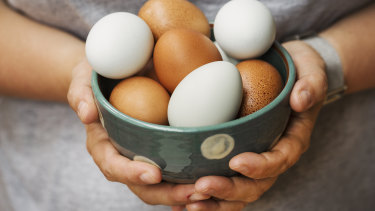 Eggs and cholesterol: the good, the bad and the neutral.Credit:Getty

Until recently, the second group appeared to be ahead. In 2015, the American Dietary guidelines removed their cap on dietary cholesterol for the first time, a decision likely to be replicated in the soon-to-be-released 2020 version.

Last year, the Heart Foundation lifted the limit on egg consumption for healthy Australians, advising those with high cholesterol or Type 2 diabetes eat no more than seven a week.

These reversals, along with reviews noting the lack of evidence to link dietary cholesterol with cardiovascular disease, have resulted in a surge of claims on social media that cholesterol has copped a bad rap and 2020 will be the year we deem cholesterol as “good”.

“It’s always a slightly complex story with pros and cons,” says Dr David Sullivan, head of chemical pathology at Royal Prince Alfred Hospital and the president of the Australian Atherosclerosis Society, of the debate.

Cholesterol is a type of fat made primarily by the body (about 85 per cent of the average person’s level) but also found in some foods, like eggs and prawns.

“[It is] an essential substance with several functions within the body, including a role in cell membranes and making some hormones,” explains public health nutritionist Dr Rosemary Stanton.

As far as dietary cholesterol goes – that is, cholesterol that comes from what we eat – the debate about eggs is often between vegan researchers who “publicise anti-egg papers” and the egg industry which funds pro-egg papers, says Stanton, who believes "eggs are a non-issue”.

“Publicity on something like eggs diverts attention away from the real problems, which are so many junk foods plus low consumption of vegetables, fruit, whole grains, legumes.”

Dr Sullivan agrees dietary cholesterol is not the bad guy.

“The amount of cholesterol in the diet is not the most important issue for determining blood cholesterol levels in the majority of people,” he says. “Eggs are a good source of nutrition and they can be included in a healthy, varied diet. They are not a major source of 'empty calories', so they are unlikely to contribute to obesity.”

Instead, it is a person’s ability to absorb cholesterol from the gut that is “a bigger factor” in terms of the effect on the blood cholesterol level.

While some people have a heightened sensitivity to cholesterol in the diet, the whole of our diet makes a difference.

Eating foods higher in dietary cholesterol are likely to have little impact if they are eaten alongside a Mediterranean diet full of fresh fruits, vegetables, whole grains and good fats, for instance.

It’s a different story if we eat eggs and prawns with foods that are a “more potent cause” of increased harmful (LDL) cholesterol levels, such as saturated and trans fats (highly processed foods, fatty bacon, fried sausages).

“We think of lots of health issues as a gene-environment interaction and the diet is a large part of the environment," explains Dr Sullivan. “One of the hallmarks of a healthy diet is variety. By variety, you guarantee you’ll get most of what you need but also a good likelihood you’ll be diluting out anything that shouldn’t be there.”

The short story is that cholesterol can be good: in the right amounts, it supports essential bodily functions and can be healthy within the nutrient matrix of certain foods. It can also be bad when we have too much LDL in our blood or when we consume dietary cholesterol in combination with trans and excess saturated fats.

It is unlikely, however, that cholesterol will ever be deemed as absolutely “good” because it fails to take context into account.

“Like most things, we need a certain amount of cholesterol,” Dr Stanton says. “More is not better, and if the excess comes because the body makes too much of it, it can be problematic.”