Pure Gold: Could turmeric be the key to staying active and exercising in 2020?

In Asia, turmeric has been enjoyed for thousands of years. Ancient Indians had more than 50 names for their beloved golden spice, each describing one of its special qualities.

But only recently has it started catching on with active people in the UK, from gym-going wellness warriors to keen gardeners and country walkers.

It turns out that they’re onto something. The UK supplements industry has expanded by more than 30% over the past 10 years, and turmeric has played a big part in that growth. 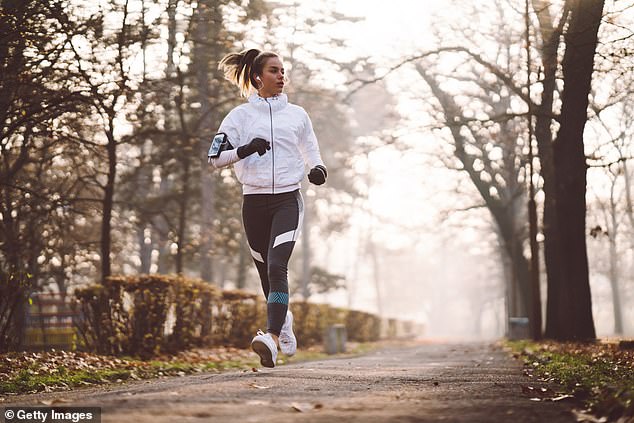 We all want to get and stay healthy and active, but it can be tough keeping it up!

The active ingredient in turmeric is called ‘curcumin’. Unfortunately it is difficult for the body to absorb, so ordinary turmeric powder from the supermarket isn’t a viable way to get the benefits.

Popular health supplements may grab attention by offering high levels of curcumin but scientists will always ask: ‘How bioavailable is it? How easy is it for our bodies to absorb?’

With these questions in mind, the scientists at FutureYou Cambridge created a Turmeric+ formulation that is 30x more absorbable than standard turmeric. It also contains vitamin C, which contributes to normal collagen formation for the normal function of cartilage.

Developed in Cambridge with the backing of a scientific advisory board that includes luminaries such as Dr Nicholas Shenker, a leading rheumatologist and chronic pain expert at Cambridge University Hospitals NHS Foundation Trust (Addenbrooke’s), Turmeric+ has received much praise for its special formulation. It allows more curcumin to get where it’s needed by combining it with lecithin to protect it in the digestive system, ensuring more of the active ingredient can reach the bloodstream. 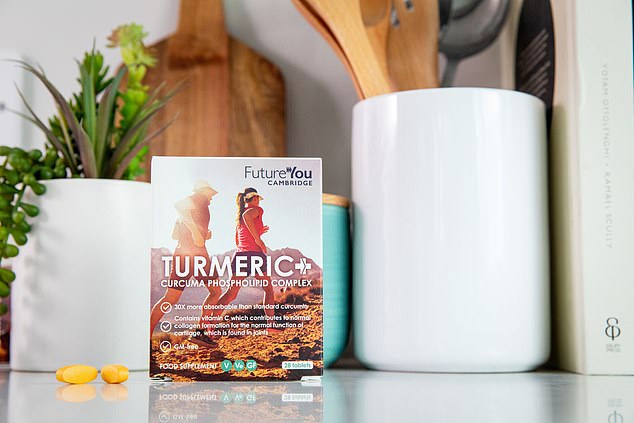 The supplement was recently certified by Informed-Sport, the global quality assurance programme for athletes. Sylvia Pilgrim from Manchester is a long-term Turmeric+ customer. Now in her sixties, Sylvia has always liked to keep fit.

‘I’m retired now, but even when I was working I always liked to go to the gym. Unfortunately, I began to slow down due to wear and tear,’ she says.

‘I’d seen advertisements for Turmeric+ and thought it was just another fad, but I decided I had nothing to lose by trying it.’

‘The difference it made was unbelievable. I went back to the gym and can now continue with my fitness regime. I have been taking it for around two years now. My husband suggested I come off it as I was feeling so much more like my normal self – I told him I’d rather give him up than my turmeric tablets!’

‘The strangest thing was, I happened to mention Turmeric+ to my doctor, when I went to the hospital for an unrelated issue. I couldn’t believe it when he said that he was taking it too!’ 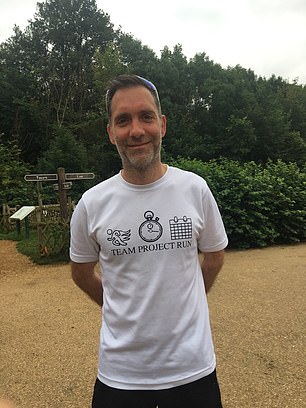 Mark Wishart, 45, has been taking Turmeric+ as part of his active lifestyle

Mark Wishart, 45, has also been taking Turmeric+ as part of his active lifestyle, which revolves around running. He loves taking part in everything from park runs to marathons.

‘Back in 2016 I was running occasionally and people suggested I join a club. It took off from there,’ he says. ‘The people I’ve met through running have been brilliant. The best thing has been getting involved with Team Project Run and the coaching I’ve had through that.’

But Mark started experiencing issues that held him back and looked for ways to get back to normal. Turmeric+ wasn’t the first supplement he considered, however.

‘I tried various supplements that I heard were good but they didn’t seem to have any real substance – nothing changed when I used them so I gave up on them. Within days of taking these I could tell the difference. It was hard to believe it could just happen like that,’ he says.

Unlike Sylvia, Mark has tried stopping the turmeric supplements to see whether they were really having an effect.

‘There have been times over the last six or eight months when I’ve actually stopped using it for a period of time, like when I went on holiday. I’ve noticed the difference when I stop and when I start taking it again. It’s literally that quick a turnaround.’ 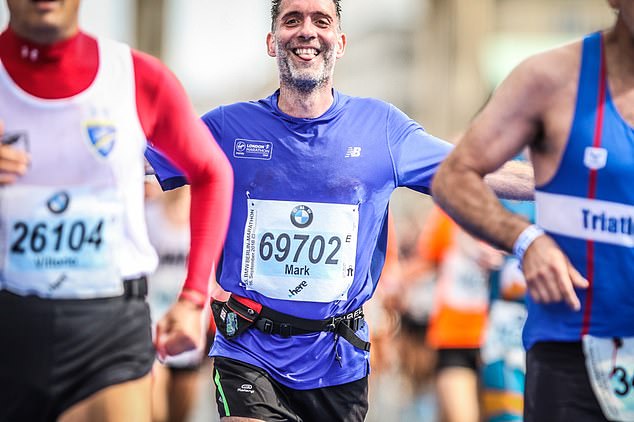 ‘I’m now taking turmeric, vitamin D and magnesium. These three supplements have really changed my outlook and have really helped.’

Since starting his supplement regime Mark has seen clear improvements in his running.

‘Three years ago I ran a 24 minute 5k. To run one in 17:52 this summer was incredible. Using the supplements has helped because I always struggled with recovery in the past.’

Bill Moore, 83, has been taking the supplements since 2015 and recommends them to his friends at the swimming pool – a recommendation backed by his incredible exploits as a competitive swimmer.

‘I’ve been racing now for 35 years and I’ve travelled all over the world to swim,’ says Bill. ‘I was 78 when I started taking Turmeric+ – I wasn’t a young man – and although I was very active I still had niggles and things like creaky knees.’

After winning a FutureYou Cambridge competition to find the most active older person, Bill started taking Turmeric+ and hasn’t looked back. 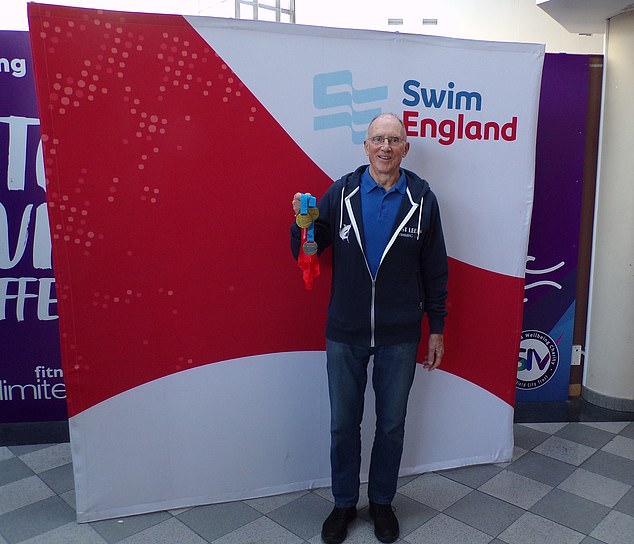 Bill Moore, 83, has been taking the supplements since 2015 and recommends them to his friends at the swimming pool

‘I feel it’s been very beneficial overall and wouldn’t like to stop. Turmeric+ has helped me stay active so I know I don’t look or perform like a man of my age, and I feel a lot better for taking them.’

At 83, Bill is still keeping up his active lifestyle. ‘I won three gold medals in the British Masters Championships last October in Sheffield for 50m breaststroke, 100m breaststroke and 1,500m freestyle. Whenever I win it’s good. Everything’s a bonus when you get into your 80s!’ 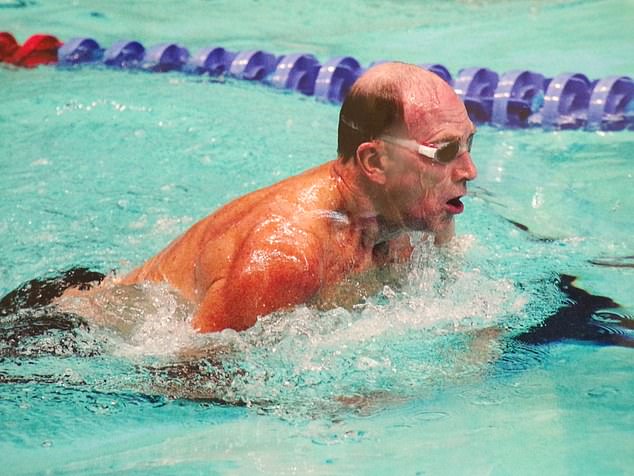 Bill credits Turmeric+ with helping him stay active and he is planning on doing his usual swimathon for Marie Curie this year – his 22nd!

‘I tell lots of people I meet about Turmeric+. The important thing is to do exercise because otherwise you stiffen up. Two people I train with take it now.’

To help other people find out if Turmeric+ is right for them, FutureYou Cambridge are offering people their first month’s supply for free.

‘We’re very happy to give people their first pack for free so they can experience it for themselves,’ says Adam Cleevely, the company’s CEO.

‘This offer might sound bonkers but we’re extremely confident in the effectiveness of our formulation.’

‘I can’t think of a better way to convince people. Most people will know if turmeric is for them between two and eight weeks after starting to take a turmeric supplement and if they like it, they will stick with it. Here at FutureYou Cambridge we have tens of thousands of regular, happy Turmeric+ customers.’

How to claim your FREE trial pack 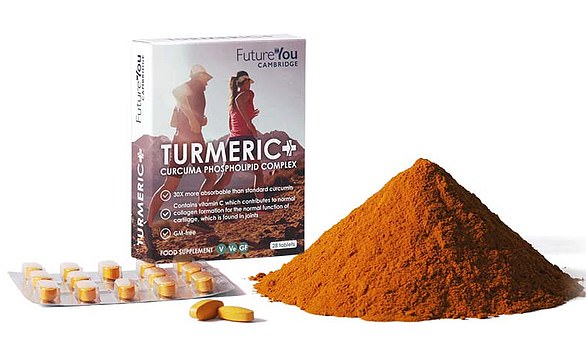 To claim your free 28 day trial pack of Turmeric+, visit futureyouhealth.com/tfcb7 and simply pay £1.50 postage when you sign up to a flexible monthly delivery service. Alternatively, please call us on freephone 0800 808 5740 quoting the code TFCB7.

After your free trial pack, subsequent packs containing 28 days’ supply will cost £15 (inc p&p) and will be delivered every 28 days.

If you don’t wish to continue after your trial, simply visit futureyouhealth.com to easily cancel your subscription or call us on freephone 0800 808 5740, without obligation.

Our Customer Care Team is available from 9.00am to 5.00pm, seven days a week.

Offer valid until 31st March 2019. One use per customer. Offer cannot be combined with any other offers / discounts or used against existing subscriptions. Full terms and conditions available here futureyouhealth.com/tfcb7.