Scientists fear up to 4,500 Chinese patients may have caught the new coronavirus as health chiefs in Wuhan confirm four more cases

Up to 4,500 patients in China may have caught the same strain of coronavirus that has killed two people, scientists fear.

Health officials in Wuhan – the city at the heart of the outbreak – confirmed four new cases today, taking the total to 48.

But Imperial College London researchers say this may be the ‘tip of the iceberg’ after analysing flight and population data.

They estimated there has been 1,700 cases of the coronavirus – which has never before seen in humans. But they added it could have passed 4,000.

This is based on the fact three cases have been detected outside of China, despite the likelihood of infected patients travelling abroad is low.

Thailand today announced a second confirmed case of the coronavirus in a woman who had travelled from Wuhan. Japan reported its first case on Thursday.

Two men in their sixties in Wuhan have already died in the outbreak, which has left health chiefs scrambling to contain the virus amid fears it will spread.

People carrying the novel coronavirus may only have mild symptoms, such as a sore throat, and assume they have a common cold, British scientists warned. 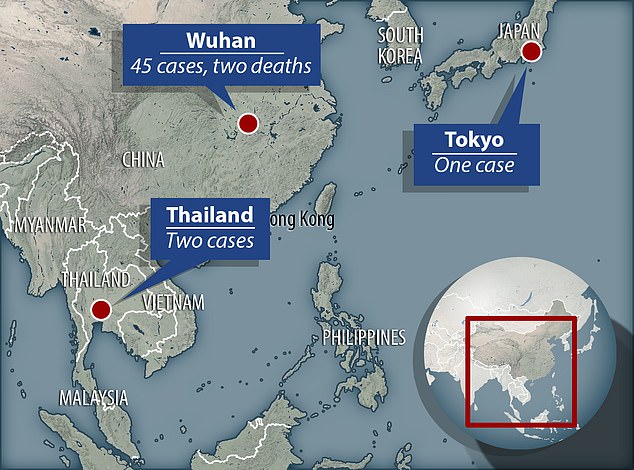 Up to 4,500 patients in China may have caught the same strain of coronavirus that has killed two people, scientists fear. Health officials in Wuhan – the city at the heart of the outbreak – confirmed four new cases today, taking the total to 48

Some 1.4billion Chinese citizens will be travelling abroad during Lunar New Year. Pictured, a notice for passengers from Wuhan is displayed in Japan, where one case has been detected

Professor Neil Ferguson, who led the research, told MailOnline: ‘Our main estimate is 1,700, but the range means we are 95 per cent sure the real number relies within 190 and over 4,000.

‘I became more concerned when cases were detected in places other than China. Generally when we see cases overseas it implies there are more cases.

‘There have been three cases detected overseas. There is about one in 600 chance each case would happen to be getting on a plane and going somewhere.

‘If that’s the case, it would imply there is 1,700 cases in Wuhan itself. Which is a lot more that has been so far confirmed. There have to be a lot more cases.’

A total of 48 people who have pneumonia-like symptoms have now tested positive for the coronavirus, Wuhan Municipal Health Commission has said.

Four new cases were revealed today, all of whom were male and fell ill between January 5 and 8, and hospitalised between January 8 and 13. They are now in a stable condition at Jinyintan Hospital.

‘We don’t know if this is the tip of the iceberg. We need more information, we only have scant details,’ Professor Ferguson said.

He investigated the spate of cases in Wuhan city with colleagues at MRC Centre for Global Infectious Disease Analysis, a branch of Imperial College London which provides advice for new diseases.

Using flight data, they report that 3,300 people in Wuhan fly internationally per day, and Wuhan International Airport has a catchment population of 19million individuals.

Based on these figures, they calculated that there is only a one in 574 chance that a person infected in Wuhan would travel overseas before they sought medical care in their holiday destination.

Using the number of cases detected outside China, it is possible to estimate the true number of clinically comparable cases within Wuhan City.

Three travellers from Wuhan have tested positive for the coronavirus outside China, which implies there might have been over 1,700 cases in Wuhan so far [(three x 574].

Estimates range from 190 cases to 4,471 because the team explored different scenarios.

The report concludes: ‘It is likely that the Wuhan outbreak of a novel coronavirus has caused substantially more cases of moderate or severe respiratory illness than currently reported.’

It added that if cases are this high, substantial  human to human transmission can’t be ruled out.

So far, health officials have said there is ‘limited’ to zero evidence that humans can spread the virus, focusing their attention on animals as the source.

The new coronavirus, which is yet to be named, causes cold-like symptoms including a runny nose, headache, cough, sore throat and a fever.

Professor Ferguson said: ‘It’s winter, it’s an enormous city with lots of people with cold and flu. People would realise they were feeling ill, but not that they have the coronavirus.

‘We want to start recommendation from this that surveillance needs to be enhanced across the city, looking for people that are reporting even flu like symptoms.

‘They need to start looking generally in hospitals for people with respiratory symptoms – that might be happening already but we don’t know.’

The World Health Organization (WHO) has said ‘much remains to be understood’ about the coronavirus, which has been described as ‘novel’.

Although the genetic sequence of the strain has now been released, scientists are still questioning how deadly it is, and whether it can be spread between humans.

Professor Ferguson said information like this tends to come to light around one month after the outbreak begins, but relies heavily on co-operation from China.

He said: ‘We need more systemic data from China. Their only really two weeks from discovering this and I suspect they are focusing on collecting data.

‘We really don’t know the spectrum for the disease severity is.’

THE NEW CORONAVIRUS IN CHINA TIMELINE

December 31 2019: The WHO China Country Office was informed of cases of pneumonia of unknown cause detected in Wuhan City, Hubei Province of China. Around 44 suspected cases were reported in the month of December.

January 1 2020: A seafood market was closed for environmental sanitation and disinfection after being closely linked with the patients.

January 13 2020: A Chinese woman in Thailand was the first confirmed case of the mystery virus outside of China. The 61-year-old was quarantined on January 8, but has since returned home in a stable condition after having treatment, the Thai Health Ministry said.

January 14 2020: The WHO told hospitals around the globe to prepare, in the ‘possible’ event of the infection spreading.

January 16 2020: A man in Tokyo is confirmed to have tested positive for the disease after travelling to the Chinese city of Wuhan.

A second death, a 69-year-old man, was reported by officials at Wuhan Municipal Health Commission. He died in the early hours of January 15 at Jinyintan Hospital in Wuhan city having first been admitted to hospital on December 31.

January 17 2020: Thailand announces it has detected a second case. The 74-year-old woman had been quarantined since her arrival on Monday. She lived in Wuhan.