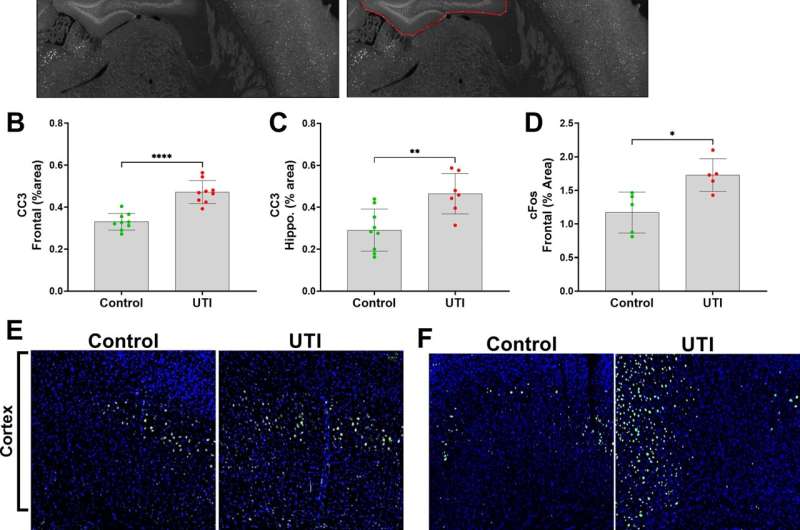 Cedars-Sinai researchers have found that blocking the action of a protein called interleukin 6 (IL-6), part of the immune system, could resolve the delirium that often accompanies urinary tract infection (UTI) in elderly patients. Their study in laboratory mice, published in the Journal of Neuroinflammation, could pave the way for clinical trials of IL-6 inhibitors as a treatment for UTI-associated delirium in humans.

Older women are among the most susceptible to developing UTIs, an infection of the bladder and urethra that causes urinary urgency and pain. UTIs also can cause delirium in older people, resulting in a sharp decline in mental abilities that triggers disoriented thinking.

“Up to one-third of elderly patients hospitalized with UTIs can experience some degree of confusion and reduced awareness of their surroundings,” said Shouri Lahiri, MD, director of the Neurosciences Critical Care Unit and Neurocritical Care Research at Cedars-Sinai and senior author of the study. “Delirium affects millions of patients a year in the U.S., contributing to longer hospital stays, long-term cognitive problems and increased mortality. Delirium can be a tipping point from which patients never fully recover. This is well established. What is less well established is why this is happening.”

To better understand the specific biological mechanisms behind UTI-associated delirium, Lahiri and colleagues observed laboratory mice with and without UTIs in specially designed mazes. In an arena where the animals could move about freely, uninfected mice spent more time in the center of the chamber. Those with UTIs huddled in the periphery, suggesting they had higher levels of anxiety, a common symptom of delirium.

In a Y-shaped maze with three arms to explore, uninfected mice tended to explore all three arms, while mice with UTIs kept returning to the same one, suggesting a lapse in short-term memory, another feature of delirium.

The investigators also observed structural changes in the brains of mice with UTIs.

In a previous study led by Lahiri, published in February in the American Journal of Respiratory Cell and Molecular Biology, investigators found a connection between ventilator-induced lung injury and delirium. Lahiri and colleagues theorized that in both cases this was because of the reaction of IL-6, which helps regulate immune response, to the lung injury or the UTI.

“Occasionally, when the response of IL-6 is excessive, our research indicates that there can be brain injury,” Lahiri said. “IL-6 induces changes within the neurons that our studies connected with delirium-like behavior. This is the first time this type of structural and functional change has been demonstrated. We’ve now shown two distinct models of this connection, one non-infectious and one infectious.”

In the current study, when investigators treated some of the infected mice with antibodies that blocked the effects of IL-6, the delirium-like behavior of those animals resolved. “Treatment with anti-IL-6 antibody in the UTI group normalized all the brain changes, both structural and functional,” Lahiri said. “A wealth of studies have shown a link between IL-6 and delirium, but only this study and our previous study have shown that IL-6 may play a direct pathological role in delirium.”

If symptoms are treated early, he added, full recovery is possible, and the next step is to design clinical trials with anti-IL-6 antibodies as a treatment for patients with UTI-induced delirium.

“Dr. Lahiri and his team have built a research framework with implications far beyond this study,” said Nancy Sicotte, MD, chair of the Department of Neurology who holds the Women’s Guild Distinguished Chair in Neurology at Cedars-Sinai. “Building on these efforts could improve outcomes for many of our patients.”

Lahiri believes the model he and co-investigators created could be used to study delirium in other conditions associated with increased incidence of UTI. These include those with pre-existing neurologic disorders like Alzheimer’s disease, Parkinson’s disease, stroke and multiple sclerosis where delirium can be hard to distinguish from the underlying disease but is important to treat.