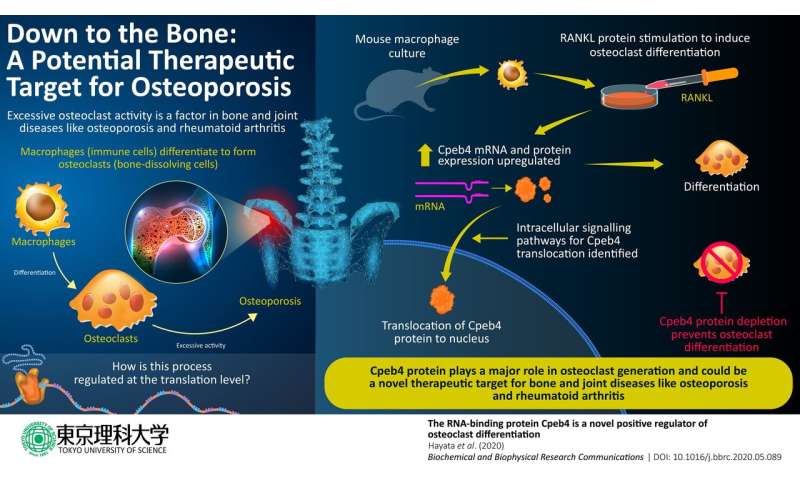 Bone-dissolving cells called osteoclasts are derived from a type of immune cells called macrophages. They are necessary for the maintenance and renewal of bones. But the intracellular mechanisms through which macrophages convert to osteoclasts are not fully understood. Recently, scientists at the Tokyo University of Science have uncovered the role of a protein called Cpeb4 in this process. Their findings suggest potential therapeutic targets for bone and joint diseases like arthritis and osteoporosis.

Chronic bone and joint diseases such as osteoporosis and rheumatoid arthritis affect millions of people worldwide, particularly the elderly, reducing their quality of life. An important factor in both of these diseases is the excessive activity of bone-dissolving cells called osteoclasts. Osteoclasts are formed through differentiation from macrophages, after which they acquire their new role in the maintenance of bones and joints, breaking down bone tissue to allow osteoblasts to repair and remodel the skeletal system.

Broadly, two intracellular processes are involved in this differentiation: First, transcription, in which a messenger RNA (mRNA) is created from the genetic information in DNA; then translation, in which the information in the mRNA is decoded to produce proteins that perform specific functions in the cell. Since the discovery of the role of a particular protein called RANKL in osteoclast formation, scientists have determined which cell-signaling pathways and transcription networks regulate osteoclast generation. Yet, the post-transcription cellular processes involved remain to be understood.

Now, in a new study published in Biochemical and Biophysical Research Communications, scientists at Tokyo University of Science, Japan, have unraveled the role of a protein called Cpeb4 in this complex process. Cpeb4 is part of the cytoplasmic polyadenylation element binding (CPEB) family of proteins, which bind to RNA and regulate translational activation and repression, as well as alternative splicing mechanisms that produce protein variants.

Dr. Tadayoshi Hayata, who led the study, says, “CPEB proteins are implicated in various biological processes and diseases, such as autism, cancer and red blood cell differentiation. However, their functions in osteoclast differentiation are not clearly known. Therefore, we conducted a series of experiments to characterize a protein from this family, Cpeb4, using cell cultures of mouse macrophages.”

In the cell culture experiments, mouse macrophages were stimulated with RANKL to trigger osteoclast differentiation and the researchers monitored the evolution of the culture. They found that Cpeb4 gene expression, and consequently the amount of Cpeb4 protein, increased during osteoclast differentiation. Then, through immunofluorescence microscopy, they visualized the changes in the location of Cpeb4 within the cells. They found that Cpeb4 moves from the cytoplasm into nuclei, while presenting specific shapes (osteoclasts tend to fuse together and form cells with multiple nuclei). This indicates that the function of Cpeb4 associated with osteoclast differentiation is likely carried out inside the nuclei.

To understand how RANKL stimulation causes this Cpeb4 relocalization, the scientists selectively inhibited some of the proteins that become involved downstream in the intracellular signaling pathways triggered by the stimulation. They identified two pathways as necessary for the process. Nonetheless, further experiments are required to elucidate the sequence of events that takes place and to identify all the proteins involved.

Finally, Dr. Hayata and his team demonstrated that Cpeb4 is absolutely necessary for osteoclast formation using macrophage cultures in which Cpeb4 was actively depleted. The cells in these cultures did not undergo further differentiation to become osteoclasts.

Taken together, the results are a stepping stone to understanding the cellular mechanisms involved in osteoclast formation. Dr. Hayata says, “Our study sheds light on the important role of the RNA-binding protein Cpeb4 as a positive influencer of osteoclast differentiation. This gives us a better understanding of the pathological conditions of bone and joint diseases and may contribute to the development of therapeutic strategies for major diseases like osteoporosis and rheumatoid arthritis.”