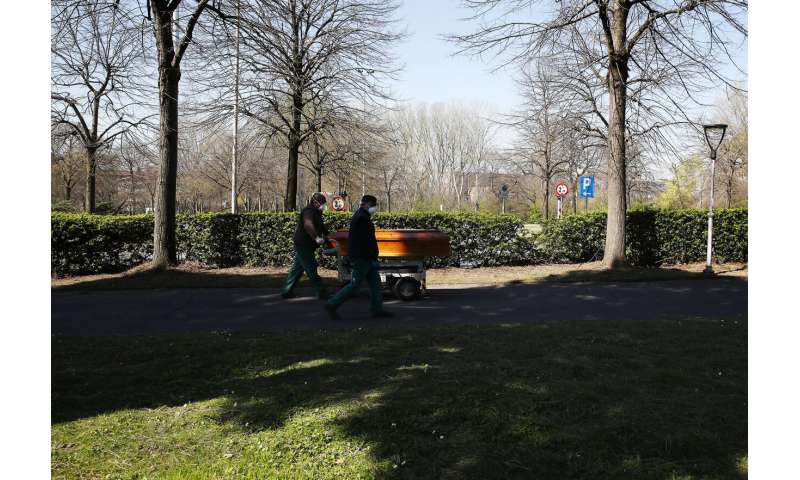 Spain started storing bodies in an ice rink converted to a makeshift morgue Tuesday, as coronavirus deaths mounted there and around the world, with the World Health Organization warning the pandemic was still in a nascent stage with infections expected to increase “considerably.”

Some 85% of new infections came from Europe and the United States, according to the WHO, with Spain registering a record daily increase of 6,584 new infections and a leap of 500 in the death toll to 2,696.

A Japanese TV network reported that Prime Minister Shinzo Abe would propose postponing the upcoming Tokyo Olympics by a year because of the outbreak.

In Madrid, vans driven by workers in protective suits and masks brought bodies to the Palacio de Hielo—Ice Palace—mall to store at its indoor skating rink until they can be buried or cremated after other facilities became overwhelmed.

The Spanish capital last week adapted two hotels to serve as emergency hospitals to help with the overflow of COVID-19 patients. It plans to convert five more, and Madrid’s hotel association has offered a total of 40 of its buildings to be used. The city has also set up a field hospital in the Ifema trade fair complex, not far from the makeshift Ice Palace morgue.

As health care workers worked around the clock, they also struggled with scarce supplies. 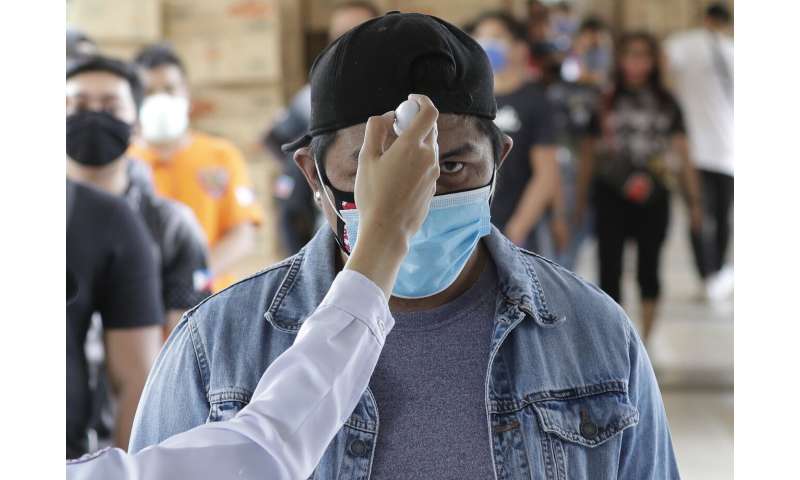 “All over the country, you see examples of workers inventing homemade suits using plastics,” Olga Mediano, a lung specialist at a hospital in Guadalajara, a city east of Madrid, told The Associated Press.

“The protective suits are fundamental because without health workers we won’t be able to do anything.”

More than 387,000 people worldwide have been infected by the new coronavirus and more than 16,700 have died, according to Johns Hopkins University.

For most people, the coronavirus causes only mild or moderate symptoms, such as fever or coughing. But for some older adults and people with existing health problems, it can cause more severe illness, including pneumonia. More than 101,000 people have recovered, including more than 60,000 in China.

Japan’s NHK television reported that Abe will propose a one-year postponement for the Tokyo Olympics during talks with IOC President Thomas Bach. Abe said a postponement is unavoidable if the 2020 Games cannot be held in a complete manner amid the coronavirus pandemic. 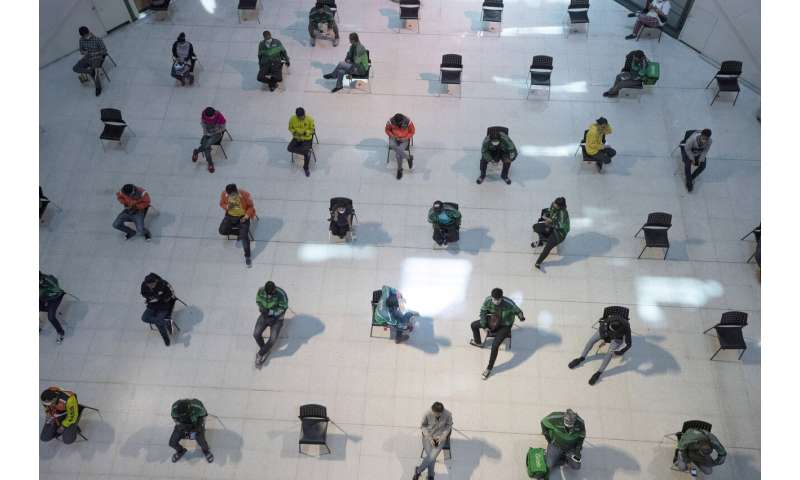 Abe held telephone talks with Bach after the IOC said it would make a decision on the Tokyo Games over the next four weeks.

In Geneva, WHO spokeswoman Margaret Harris cited a “glimmer of hope” in hard-hit Italy after two days of slight declines in the number of new cases and deaths, while cautioning it’s “early days yet”—and the trend needed to be monitored.

In another positive sign, Chinese authorities said they would finally end a two-month lockdown in hard-hit Hubei province where the coronavirus outbreak first began.

Still, Harris said the scope of the global outbreak was “enormous” and that cases were expected to increase “considerably.”

“Just to put it in proportion: It took two years in the worst Ebola outbreak we ever had, the West African outbreak, to reach 11,000 deaths,” Harris said. 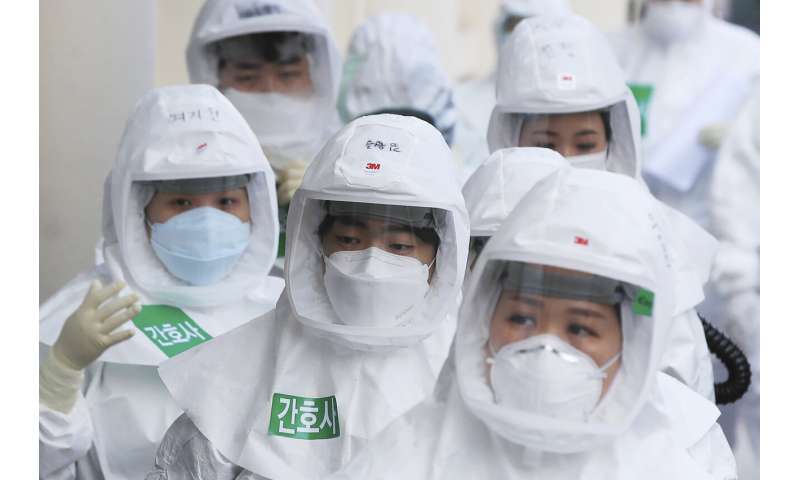 In a sign of hope, Chinese authorities said they would finally end a two-month lockdown in hard-hit Hubei province where the coronavirus outbreak first began, while nations in Europe, North America and elsewhere pressed harder to enforce the stay-at-home restrictions placed on 1.5 billion people worldwide.

In the U.S., the government was expected to pass a $2 trillion spending plan that would prop up businesses, which has been stalled for days.

There have been more than 46,000 infections and 530 deaths in the U.S. as the virus continues to spread.

In New York, now one of the world’s biggest virus hot spots, authorities rushed to set up the thousands of hospital beds they will need in just weeks to protect the city’s 8.4 million people. The mayor warned that the city’s hospitals are just 10 days away from shortages in basic supplies, while the state’s governor announced plans to convert a New York City convention center into a hospital. 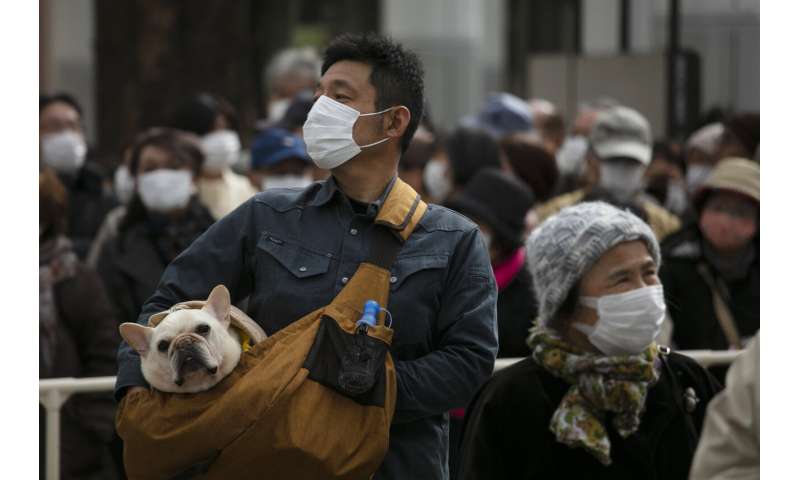 In Italy, Spain and France, the pandemic has already pushed national health systems to their breaking points.

The outbreak has killed more than 6,000 Italians, the highest death toll of any country. Officials said Monday the virus had claimed just over 600 more lives, down from 793 two days earlier.

Amid the spiking numbers in Spain, relatives of elderly people and retirement homes’ workers are expressing growing concern about the situation in retirement homes across Spain, especially in Madrid.

“We live in anguish, we have no information whatsoever,” said Esther Navarro, whose 97-year-old mother with Alzheimer is at the Residencia Usera in Madrid where some of the cases have been identified. 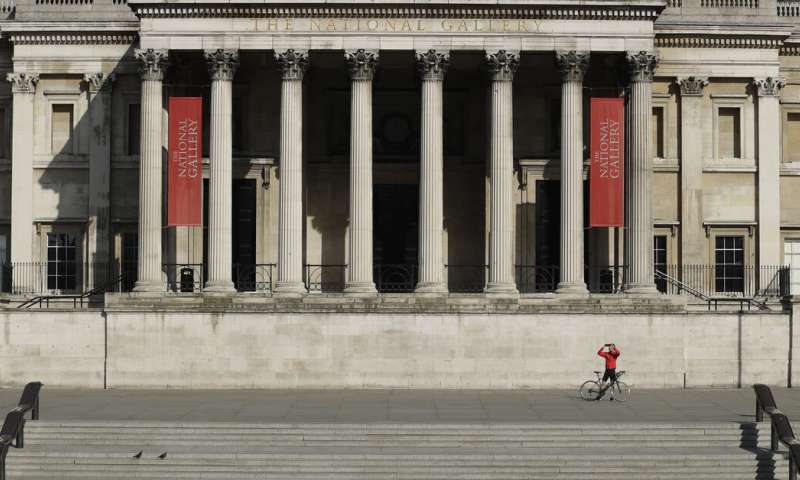 Confusion rippled through Britain on the first morning after Prime Minister Boris Johnson ordered a three-week halt to all nonessential activity. The government has told most stores to close, banned gatherings of three or more people and said everyone apart from essential workers should leave home only to buy food and medicines or to exercise. But photos showed crowded trains Tuesday on some London subway lines.

Asian stock markets reacted positively Tuesday, markets in Japan and South Korea posting significant gains after the Federal Reserve said it will lend to small and large businesses and local governments to help them through the crisis. 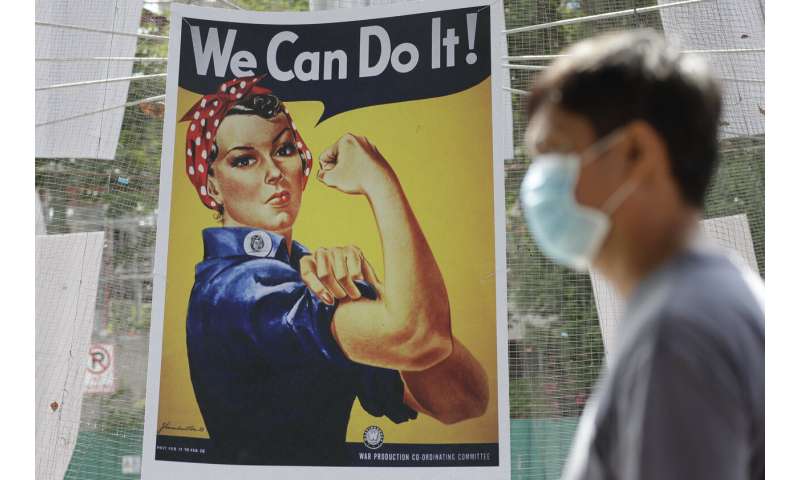 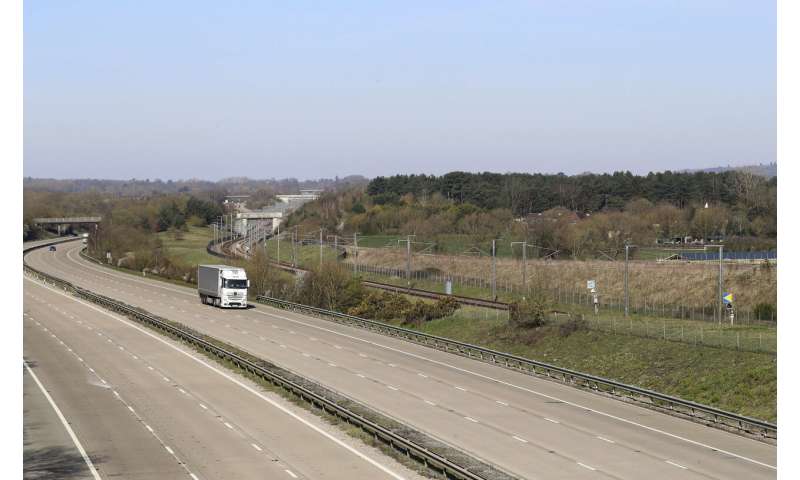 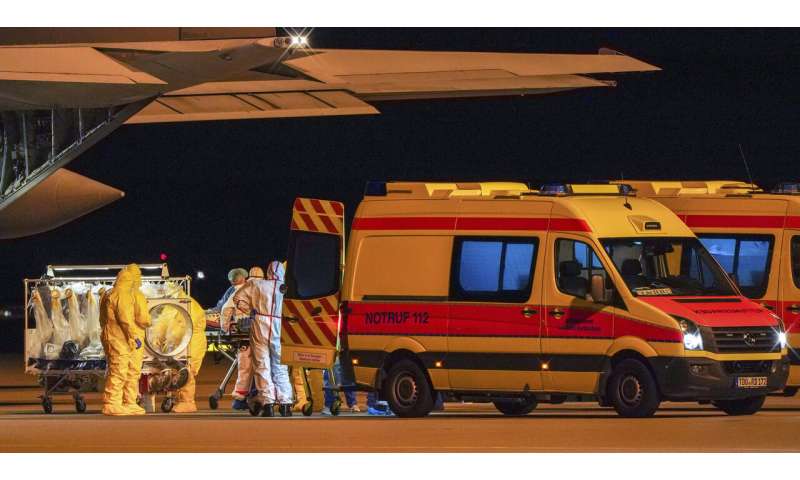 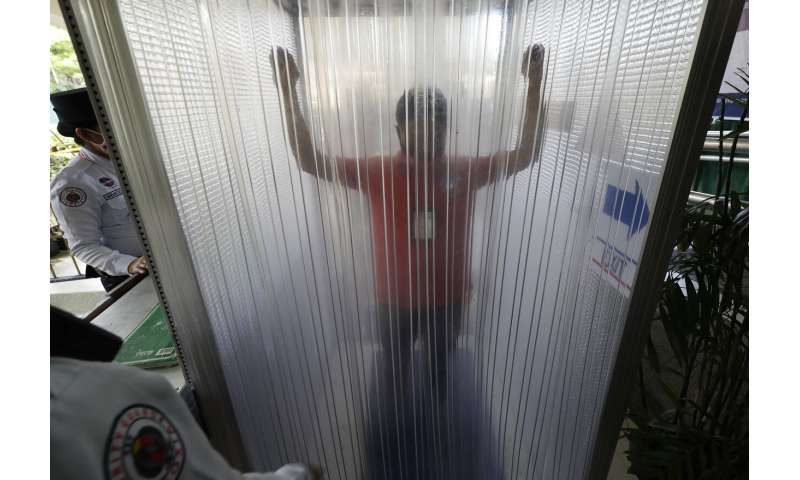 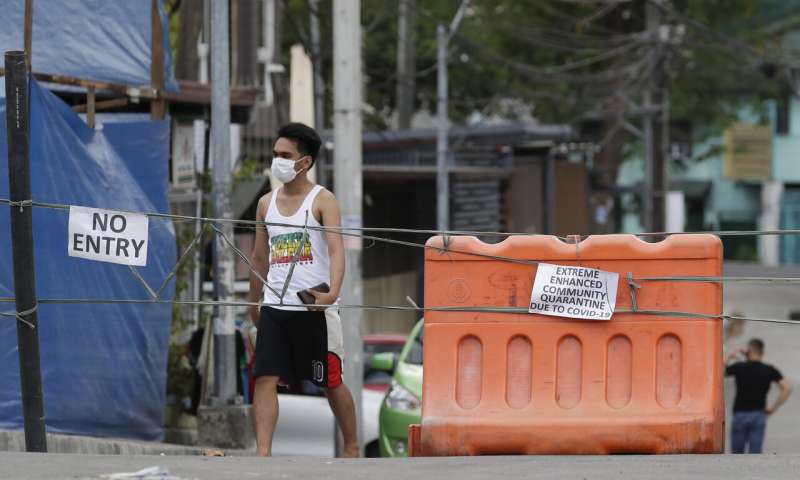 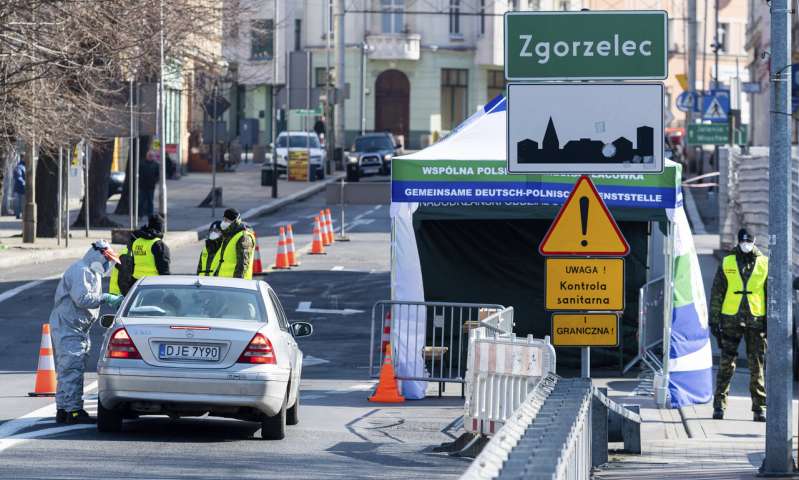 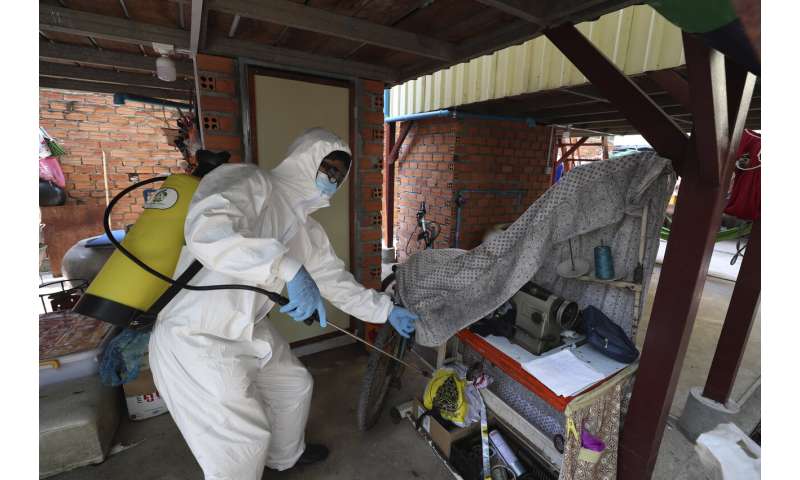 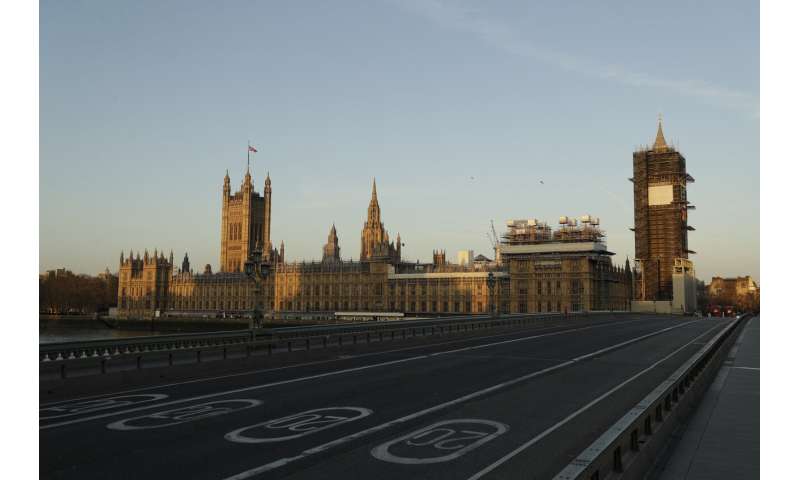 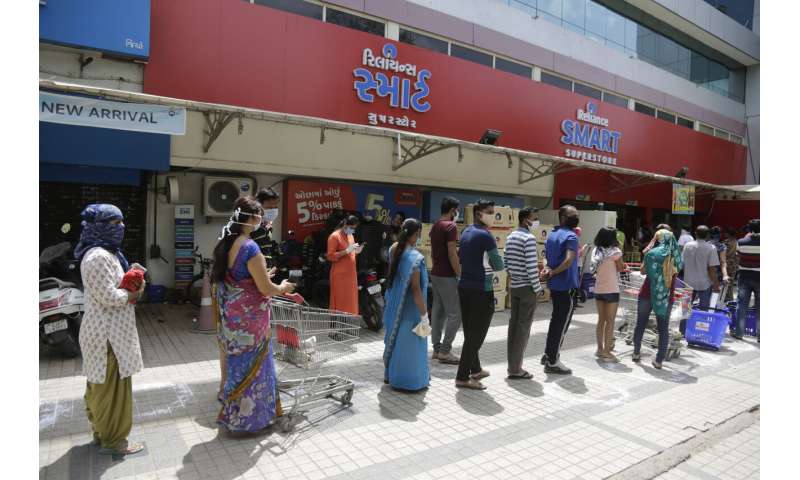 The move toward lockdowns has been influenced by the success of such measures in China, where the virus was first found late last year in the central city of Wuhan. China barred people from leaving or entering the city on Jan. 23, and soon expanded that to cover most of Hubei province, home to 70 million people.

On Tuesday, after more than a week in which China said the vast majority of new virus cases were imported from abroad, authorities said the restrictions in Hubei would end. People cleared by health authorities would be able to leave the province after midnight. Wuhan itself will remain locked down until April 8.