Teenage vapers are FIVE TIMES more likely to catch coronavirus than those who do not use e-cigs, study finds

Teenagers who vape are five times more likely to catch Covid-19, according to new research.

And the risk soars almost seven-fold if they also use conventional cigarettes. Both forms of smoking weaken the lungs, warn scientists.

The study is the first to look at the link between the devices and coronavirus cases in young people using population-based data collected during the pandemic.

Oddly, the researchers did not find a link between teens who smoke only combustible cigarettes and higher rates of positive COVID-19 tests.

Although research on cigarettes and smoking has turned up some curious results – such as an Italian study that smokers accounted for a lower proportion of hospitalized coronavirus patients they do of the general population.

The scientists behind the new study, from Stanford University, think that among the teens they studied, it may simply bet that so few use only cigarettes, and majority who smoke also vape.

Regardless, the study suggests these youth are more at-risk for coronavirus than they might think. 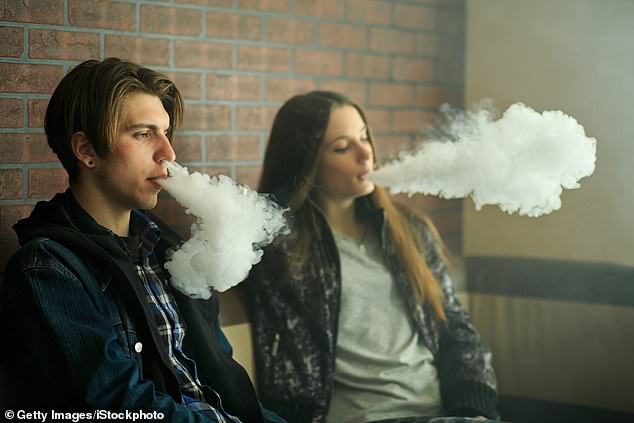 Americans between ages 13 and 24 who vape were five times more likely to test positive for coronavirus compared to those who did not use any nicotine products, Stanford University researchers found (file)

‘They may believe their age protects them or they will not experience symptoms but the data show this isn’t true among those who vape’ said lead author Dr Shivani Mathur Gaih.

‘This study tells us pretty clearly youths using vapes or are using e-cigarettes and cigarettes are at elevated risk. And it’s not just a small increase – it’s a big one.’

The findings are based on online surveys of 4,351 participants across the US. Around half of the 13 to 24 year-olds had used e-cigs.

‘Teens and young adults need to know if you use e-cigarettes, you are likely at immediate risk of Covid-19 because you are damaging your lungs,’ said senior author and pediatrician, Dr Bonnie Halpern-Felsher, said.

Vapers tested for the virus were five times more likely to be diagnosed than peers who had never consumed any nicotine products, she said.

Those who had used e-cigs and conventional cigarettes in the previous 30 days were 6.8 times more prone.

They were also almost five times as likely to experience symptoms of Covid-19 – such as coughing, fever, tiredness and difficulty breathing. 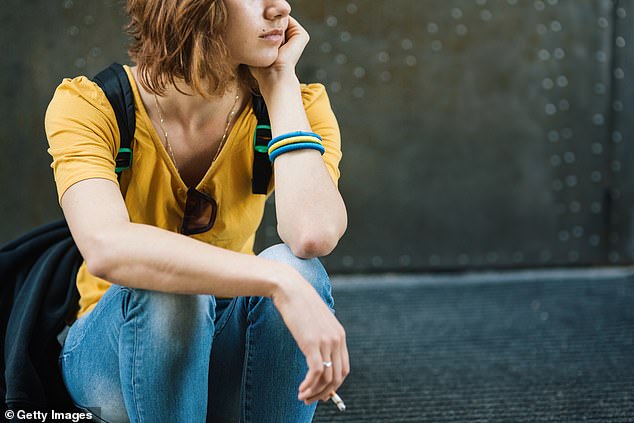 Young adults and teens who smoked only cigarettes and did not vape were not more likely than non-users to test positive, but the researchers say this may be because so few teens now use only combustible cigarettes, with most who do also using e-cigs

This may explain why they were also more likely to be tested. In May – when the study was carried out – many regions limited it to people with symptoms.

Depending on which nicotine products they used and how recently young people who vaped or smoked were 2.6 to nine times more likely to receive Covid-19 tests.

The team at Stanford University, California, hope the results will alert teenagers and young adults about the dangers of e-cigs.

They also called on the US Food and Drug Administration (FDA) to further tighten regulations governing how vaping products are sold to young people.

‘Now is the time. We need the FDA to hurry up and regulate these products,’ Dr Halpern-Fisher added.

‘And we need to tell everyone: ‘If you are a vaper, you are putting yourself at risk for Covid-19 and other lung disease.’

The results stood after other factors were taken into account including age, gender, sexuality, ethnicity, mother’s level of education and BMI (body mass index).

And rates of positive tests remained higher among teenage vapers after the researchers took into account readily they complied with stay-at-home orders, social distancing and other restrictions to stem the spread, so higher rates of infection were unlikely a reflection of risky behavior in general.

They were also adjusted for rates of Covid-19 diagnosis where individuals were residing – and state and regional trends in e-cig use.

The study published in the Journal of Adolescent Health backed previous research suggesting being poor or from a minority ethnic group increased the risk.

It did not identify a connection between a Covid-19 diagnosis and smoking conventional cigarettes alone.

This may be due to the prevalent pattern of using both e-cigs and traditional cigarettes.

Other research has shown nearly all nicotine-using young people vape – and some also smoke cigarettes. But very few use cigarettes only, explained Dr Halpern-Felsher.

E-cigs are promoted as helping smokers to quit. Traditional smoking has fallen by around eleven percent in the UK and US over the past two decades.

But vaping has more than tripled in teenagers during the last two years – with most preferring flavours such as strawberry, bubblegum and chocolate.

E-cigs turn a liquid into vapour to be inhaled. An estimated one-in-seven 11 to 18 year-olds in the UK have used them, as do some five million American teens.

So far, e-cigs do not seem to contain the same kinds of carcinogens that combustible cigarettes do.

But previous research has suggested the chemicals can damage the heart and lungs – both of which are particular targets of coronavirus, too.