Men with alcohol and drug problems are up to seven times more likely to abuse partner, a study has found.

Oxford researchers compared rates of domestic abuse arrests among millions of Swedish men, finding a higher prevalence among those who abuse substances.

They said drinking and drug use can cause a person to lose their inhibitions and turn to violence to solve arguments.

Mental illnesses and behavioural disorders, such as depression and ADHD, were also linked to abusive behaviour, including beating, intimidating, or sexually abuse.

This may be because the man uses alcohol or drugs as a coping strategy, the researchers said. 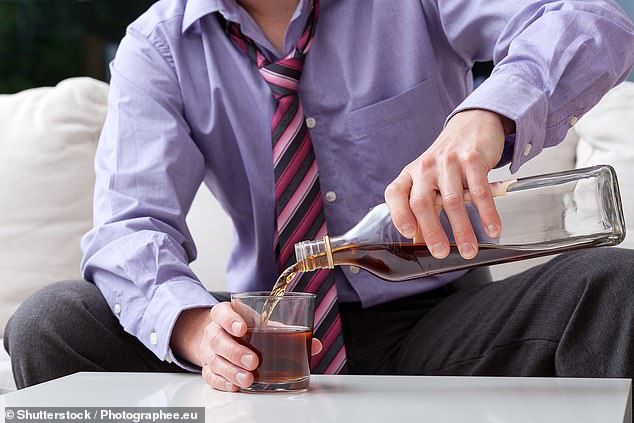 Men with alcohol and drug problems are up to seven times more likely to abuse partner, a study led by University of Oxford has found

He told the BBC: ‘Treatment programmes for perpetrators have not been very effective to date – probably reflecting lack of high-quality evidence on risk factors that can be targeted.

The study tracked 140,000 men who had been clinically diagnosed with a drink or drug problem between January 1998 and December 2013.

Researchers compared how many had later been arrested for threatening, attacking or sexually assaulting their partners in a follow up period of 3.4 to 4.8 years.

The rates were compared with more than 2.7million men in the general population with a similar age profile.

The study found 1.7 per cent of men dependent on alcohol had subsequently been arrested for domestic abuse – six times higher than the general population.

HOW CAN ALCOHOL LEAD TO VIOLENCE?

The researchers of the study, led by University of Oxford, said: ‘Alcohol and drug use disorders decrease an individual’s inhibition, which in turn can lead to the use of violence to solve conflicts in intimate relationships.’

Alcohol consumption is thought to reduce inhibitions and cloud judgement, as well as impairing the ability to interpret social cues.

Some research suggests people are more likely to act violently when drunk than when not because they don’t feel they will be held accountable.

It’s likely that drugs that reduce inhibition, such as cocaine, will have similar effects to those of alcohol, researchers believe. But this has not been studied extensively.

For men with a drug problem, 2.1 per cent had been arrested, which was seven times higher than the general population.

The researchers also compared the alcohol and drug addicts to their siblings in order to see if their violence could be explained by factors such as family background or genetics.

They found there was still a heightened risk among men dependent on drink or drugs, suggesting the substances are the problem.

However, the risk was slightly less pronounced when compared with their brothers who did not have substance misuse problems.

The authors of the paper, published in PLOS-Medicine, said: ‘Alcohol and drug use disorders decrease an individual’s inhibition, which in turn can lead to the use of violence to solve conflicts in intimate relationships.’

They found all, except autism, increased the risk of domestic abuse. Again, the odds reduced slightly when compared with siblings.

Dame Vera Baird, victims’ commissioner for England and Wales, said the data must be taken with caution.

She told the BBC: ‘Many perpetrators who commit domestic violence while drunk will also be violent and controlling while sober.

The researchers said they couldn’t examine domestic abuse perpetrated by women towards men because the data in the Swedish registers didn’t separate this type of crime from general domestic violence in women.

An estimated 2.4million adults in England and Wales (5.7 per cent) have experienced domestic abuse in the last year, according to the Crime Survey.

Some 10million women and men are estimated to experience domestic abuse in the US every year, according to charities.

In the US, England and Wales, victims believed their partners to have been drinking prior to a physical assault in 55 per cent and 32 per cent of cases respectively, according to the World Health Organization.