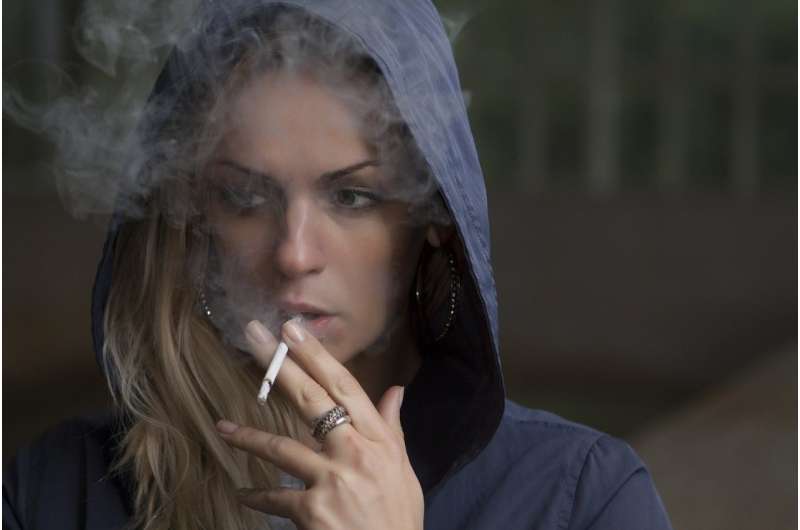 The offer of up to £400 of shopping vouchers to stop smoking during pregnancy as an addition to usual stop smoking support is highly effective, finds a trial published by The BMJ today.

The results show that rewarding pregnant women in this way more than doubled the proportion who were still smoke-free by late pregnancy, compared with those who received usual support only, and can save costs to the NHS in the longer term.

However, they also show that most women who stopped smoking during pregnancy relapsed by six months after their baby was born.

Smoking during pregnancy is associated with a range of problems including an increased risk of stillbirth, sudden infant death syndrome, asthma, and obesity among offspring.

Although the proportion of women who smoke during pregnancy has halved over the past 20 years, a substantial number continue to smoke while pregnant and tend to be harder to reach.

To address this, researchers drew on data from a successful phase 2 feasibility trial in Glasgow, Scotland to assess whether financial incentives increase smoking cessation during pregnancy when used in combination with current UK stop-smoking services.

Their findings are based on 941 pregnant women (average age 28) recruited from seven stop-smoking services in Scotland, Northern Ireland, and England between January 2018 and April 2020.

Participants reported being smokers (at least one cigarette in the past week) at their first maternity visit, when they were 11 weeks into their pregnancy, on average. Participants were then randomly assigned to either the intervention group (471) or the control group (470).

The intervention group was offered usual support plus up to £400 ($440; €455) of high street shopping vouchers to incentivize setting a quit date and remaining abstinent throughout pregnancy.

Abstinence was reported by participants at four and 12 weeks and was verified by a carbon monoxide breath test. A final voucher was given to those who reported still being smoke-free in late pregnancy (between 34 and 38 weeks’ gestation), verified by a saliva test.

A range of potentially influential factors including mother’s age, years of smoking, income, use of nicotine replacement therapy and e-cigarettes, timing of birth and baby’s birth weight were taken into account.

More women in the incentives group (71%) than in the control group (64%) engaged with the stop-smoking services and set a quit date. Saliva tests confirmed that 126 (27%) women in the intervention group had stopped smoking by late pregnancy compared with 58 (12%) controls.

However, abstinence rates measured six months after giving birth were low in both groups (6% in the intervention group vs. 4% in controls), suggesting that most women who stopped smoking relapsed not long after their babies were born.

Overall, the birth weight of babies from 443 intervention participants and 450 controls showed no significant difference between groups (average 3.18 kg vs 3.13 kg).

The researchers did find a clinically important but not significant (10%) increase in birth weight among those who quit when offered incentives and would not have quit without that offer, but they say further analysis is needed to better understand the relevance of this finding.

Severity of preterm birth was similar between groups, and all serious adverse events, such as miscarriages and stillbirths, were unrelated to the intervention.

This was a well-designed trial, but the researchers acknowledge that only 23% of women screened by stop-smoking services were enrolled in the trial, which could have overestimated quit rates in both groups. Furthermore, almost all participants were white, so the results may not apply to other groups.

Nevertheless, they say these results support implementation advocated in NICE guidelines by showing that adding financial incentives to current stop smoking support for pregnant women is effective, does not disrupt current UK stop-smoking services, and can save costs to the NHS in the longer term.

Future research should look into which format and incentive level at which frequency achieves the most effective and cost-effective outcome, they write. Continuing incentives to 12 months after birth to prevent relapse are also being examined in an ongoing trial.

Financial incentives for sustained smoking abstinence in pregnancy are among the most cost-effective interventions in healthcare, and a key opportunity to reduce health inequalities in early life, say researchers in a linked editorial.

However, they point out that partners of most pregnant women who smoke are also smokers, and say interventions “should also be targeted at family members who smoke, to create a smoke-free home for mother and child.” Smoking cessation support for pregnant women “should also continue beyond childbirth to improve the disappointingly low long term abstinence rates,” they add.