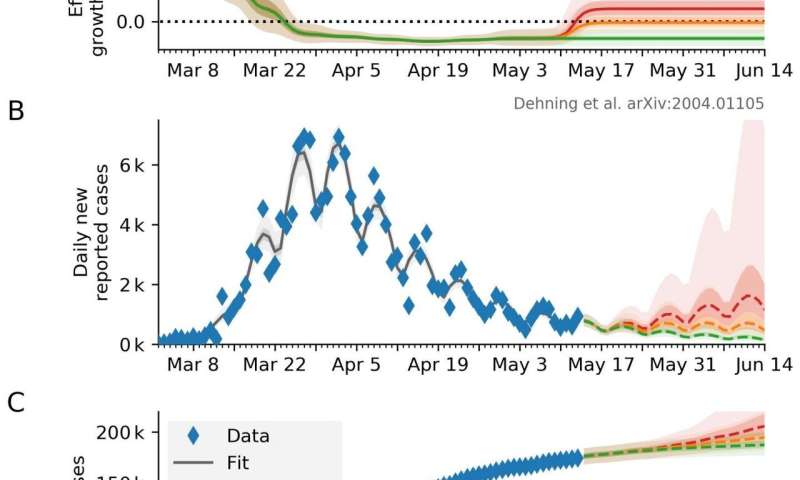 Researchers from the Max Planck Institute for Dynamics and Self-Organization (MPIDS) and the University of Göttingen have now succeeded in analyzing the German COVID-19 case numbers with respect to past containment measures and deriving scenarios for the coming weeks. Their computer models could also provide insights into the effectiveness of interventions in other countries. Their results have been published today online in the journal Science.

Many people are currently concerned about how well the measures to contain the pandemic have worked in recent weeks and how things will continue in the coming weeks. Scientists at the MPIDS have been investigating these questions. The team has been simulating the course of the corona epidemic in Germany together with scientists from the Göttingen Campus since mid-March. In their model calculations, the researchers relate the gradually increasing restrictions of public life in March to the development of COVID-19 case numbers. In particular, they examined the effect of the three packages of interventions in March: the cancellation of major public events around March 8, the closure of educational institutions and many shops on March 16, and the extensive contact ban on March 22.

To this end, the researchers combined data on the temporal course of the COVID-19 new infections with an epidemiological dynamics model that allows the analysis of the course of the pandemic to date and the investigation of scenarios for the future. According to the computer models, the packages of measures initially slowed down the spread of COVID-19 and finally broke the dreaded exponential growth. “Our analysis clearly shows the effect of the various interventions, which together ultimately brought about a strong trend reversal,” says Viola Priesemann, research group leader at the Max Planck Institute. Michael Wilczek, research group leader and co-author of the study, adds: “Our model calculations thus show us the overall effect of the change in people’s behavior that goes hand in hand with the interventions”.

A computer model also for other countries and regions

In their work, the Göttingen researchers did not only have Germany in mind. “From the very beginning, we designed our computer model so that it could be transferred to other countries and regions. Our analysis tools are freely available on GitHub and are already being used and developed further by researchers around the world,” says Jonas Dehning, lead author of the study. The Göttingen research team is currently working on applying the model to European countries. It is particularly important to work out the different points in time at which the measures were taken in different countries, which could allow to draw conclusions about the effectiveness of the individual measures.

Concerns about the second wave

The Göttingen researchers’ analysis of Germany on the basis of case numbers up to April 21 indicated an overall positive development of case numbers for the coming weeks. However, their analysis also reveals a central challenge in assessing the epidemic dynamics: changes in the spread of the coronavirus are only reflected in the COVID-19 case numbers with considerable delays. “We have only recently seen the first effects of the relaxation of restrictions of April 20 in the case numbers. And until we can evaluate the relaxations of May 11, we also have to wait two to three weeks,” says Michael Wilczek. The researchers are therefore continuing to monitor the situation very closely. Every day they evaluate the new case numbers to assess whether a second wave is to be expected.