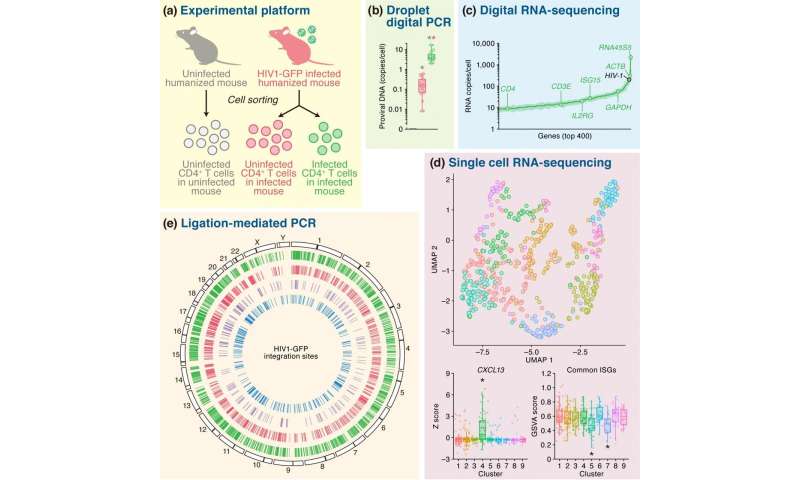 For eradication of HIV-1 infection, it is important to elucidate the detailed features and heterogeneity of HIV-1-infected cells in vivo. In this study, a hematopoietic stem cell-transplanted humanized mouse model infected with a gene-modified HIV-1 was used to reveal multiple characteristics of HIV-1-producing cells in vivo.

A research group at The Institute of Medical Science, The University of Tokyo (IMSUT) using HIV-1-infected cells performed “multiomics” analyses, which are technologies recently developed to comprehensively investigate the features of biological samples.

“Our findings describe multiple characteristics of HIV-1-producing cells in vivo, which could provide clues for the development of an HIV-1 cure,” said the lead scientist, Kei Sato, Associate Professor (Principal Investigator) in the Division of Systems Virology, Department of Infectious Disease Control, IMSUT. The results of this research were published in Cell Reports on July 14, 2020.

For eradication of HIV-1 infection, it is important to gain an in-depth understanding of the wide-ranging characteristics of HIV-1-infected cells in vivo.

Recently developed ‘omics’ analyses can be a powerful tool to identify the characteristics of HIV-1-infected cells. However, it should be noted that a large majority of the CD4+ T cells in infected individuals are uninfected, and therefore, the transcriptional profiles of ‘bulk’ CD4+ T cells in vivo do not reflect those of ‘pure’ HIV-1-producing cells.

According to the research group, this study consisted of the four following analyses:

First, droplet digital PCR revealed the presence of potential reservoirs in infected humanized mice. Second, ligation-mediated PCR showed the preference of HIV-1 to integrate into open chromatin regions, as suggested by the association of the epigenetic modifications of integration sites with viral production. Third, digital RNA-sequencing quantified the absolute copy number of viral transcripts in the HIV-1-producing cells in vivo and further identified the differentially expressed genes between virus-infected and uninfected cells. Finally, single-cell RNA-sequencing revealed and characterized the heterogeneity of the HIV-1-producing cells in vivo.