Motor neurone disease could be spotted more than a decade before the condition takes hold, scientists say.

Aberdeen University experts believe they can spot the neurodegenerative disorder simply by looking at stool samples.

The condition, which causes muscle weakness, slurred speech and weight loss, is thought to be triggered by unusual clumps of proteins.

These can be found in the gut before the tell-tale symptoms even begin, the study revealed.

The findings come from a study of 13 MND patients, aged between 40 and 85.

All of them had had biopsies taken for other reasons previously, including one who had a lymph node sample taken 14 years earlier.

It can take years to get diagnosed with MND because there’s no single test, forcing doctors to order a swathe of tests to rule out other illnesses.

Study author Dr Jenna Gregory said that early detection of MND ‘could be a critical missing step in our attempts to cure this disease’. 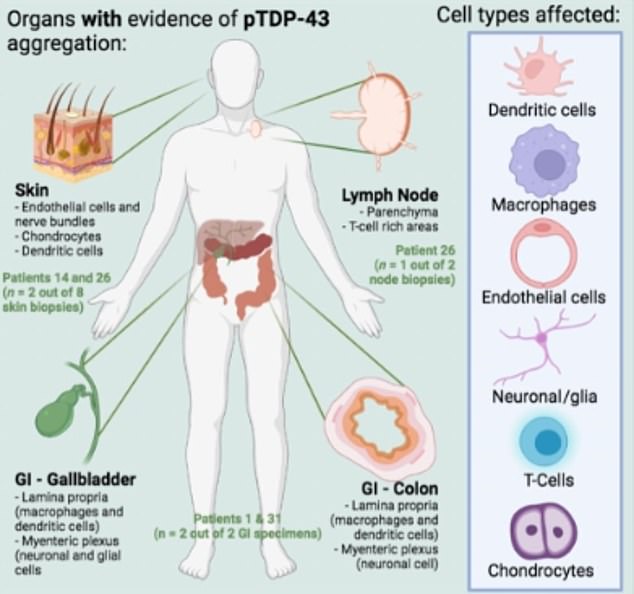 Researchers at the University of Aberdeen studied samples from around a dozen patients who suffered from the rare condition that damages the brain and nerves. They found that half of patients had markers of the disease in biopsies up to 14 years before they developed telltale gripping, walking and speaking difficulties. The results show six patients had the protein in their digestive system, lymph nodes or skin

Motor neurone disease is caused when nerves in the brain and spinal cord — which are needed to walk, speak and breathe — stop working properly.

As the condition progresses, sufferers find that all of these actions become more difficult or impossible.

It is not clear what causes the condition and there is currently no single test or cure.

But it is thought to be linked to the build-up of proteins in the brain that clump together and cause problems with moving, breathing and thinking.

Symptoms of the condition begin gradually over weeks and months, usually on one side of the body before worsening.

These include a weakened grip, dragging of the left leg and slurred speech.

Sufferers live for three to five years, on average, after they are diagnosed. Byt some may live for up to 10 years.

It causes the rapid degeneration of nerves and brain cells, leading to weakness and muscle waste. Patients also struggle to walk, talk, use their arms and hands, eat and breathe.

Over time it can lead to paralysis and eventually death, although some can live with it for decades.

It is not clear what causes the condition.

But it is thought to be linked to the build-up of TDP-43 proteins in the brain that clump together.

However, Aberdeen researchers noted that people with MND often have symptoms affecting their gut, such as altered bowel habits and weight loss.

In a bid to spot early signs of the illness, the team studied historically banked tissue biopsies and stool samples taken from 13 over-40s in Scotland who went on to develop MND.

The researchers had 68 samples in total, taken from eight different organ systems, including the digestive, muscular and lymphatic.

The samples were tested for TDP-43.

The results, published in The Journal of Pathology: Clinical Research, show that six patients had the protein in their digestive system, lymph nodes or skin.

And in one case, the protein was detected in a patient’s lymph nodes 14 years before their MND was confirmed.

The findings suggest MND could be detected ‘many years’ before people start suffering well-known neurological symptoms, the team said.

Detecting MND earlier would allow not only for better drugs to be developed but ‘lead to a rethinking of neurodegenerative conditions’ from being end-stage illnesses to disorders that can be screened for long before brain-related symptoms develop, the researchers wrote.

Dr Gregory, a clinical researcher at the university, said: ‘I believe this is a significant finding for our wider understanding of this disease.

‘The early detection of disease could be a critical missing step in our attempts to cure this disease — if disease markers are present outside of the brain it could pave the way for non-invasive early detection.’

As it stands, there is just one approved drug that has been shown to increase the lifespan of people with MND — but only by a few months.

The researchers said one reason MND-fighting drugs are difficult to develop is that by the time someone has visible symptoms of the disease, it may be too late for successful intervention.

Dr Fergal Waldron, a researcher at Aberdeen University and study co-author, said: ‘Potentially effective treatments have been identified from a wide-range of experimental studies.

‘However, in these studies they were often only effective, or most effective, when applied prior to the onset of the disease — early detection in this way is huge step forwards in our search for a cure.

‘We hope that this will mean that there is a better chance of treatment success, and that the onset of the disease could be delayed or even prevented if caught and treated early enough.’

Dr Mathew Horrocks, a biophysicist at the University of Edinburgh who also worked on the study, said: ‘MND is a devastating disease, with those being diagnosed surviving a mean of three-five years.

‘This work shows that it’s possible to observe hallmarks of the disease in easily accessible tissue more than a decade prior to the first symptoms.

‘This could pave the way to earlier diagnosis, extending the therapeutic window, leading to an eventual cure to MND.’