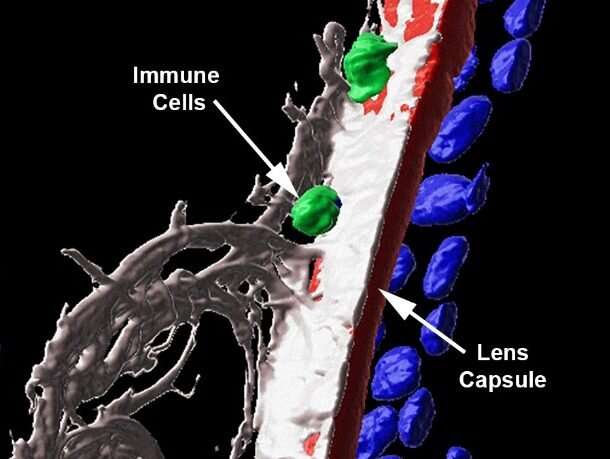 There’s a lot that our eyes have to protect themselves from—dust and debris; viruses and bacteria; chemicals from things we use every day like soaps and lotions; ultraviolet radiation from the sun; and hours of looking at computer screens or devices. Given all these potential threats, it might be surprising to learn that parts of the eye that are central to vision—the lens, cornea and retina—are immune privileged, meaning they lack immune cells and the protection they offer. But then how do these critical tissues protect themselves?

This was a question that Sue Menko, Ph.D., professor of Pathology, Anatomy and Cell Biology at Thomas Jefferson University and leader in the field of eye research, has pondered about the lens. A few years ago, she and researchers in her lab were studying a mouse that was engineered to lack a key protein required to develop the perfectly clear structure of the lens. As they expected, without this protein, the lens was malformed. But to their surprise, they also observed immune cells in the lens trying to fix the damage. This was the first time immune cells had been found to be recruited to the lens, and it challenged decades of scientific dogma.

Not only that—the researchers found that even if damage was occurring in the lens, immune cells showed up in other parts of the eye, like the cornea, a layer that forms the front of the eye and focuses light on to the lens. Conversely, last year the Menko lab, in a collaboration with Mary Ann Stepp’s lab at George Washington University, found that when the cornea was wounded, immune cells traveled to the surface of the lens. 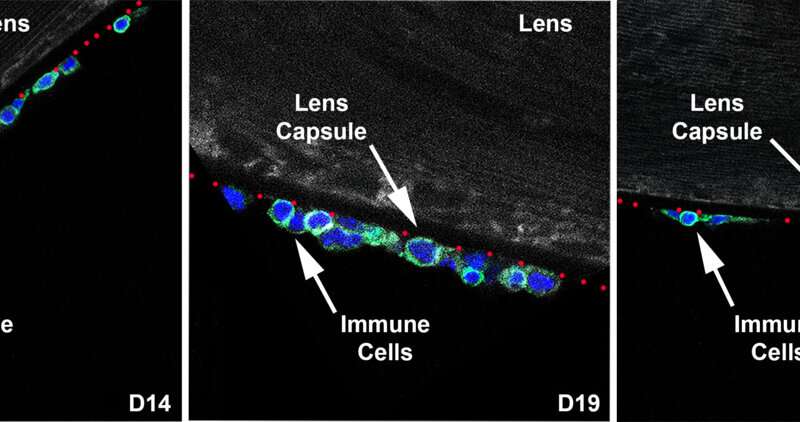 Now in a new study, the researchers show that immune cells respond to the lens, not just following an acute injury in the eye, but also to long-lasting inflammation. In collaboration with Dr. Rachael Caspi’s lab at the National Eye Institute and the Stepp lab, they studied a mouse model of uveitis, a form of eye inflammation triggered by infection or injury, and is considered to be an autoimmune disease like diabetes. Left untreated, uveitis can lead to a number of complications including retinal scarring, glaucoma and cataracts of the lens. However, because the lens was thought for so long to have immune privilege, the role of immune cells in cataracts associated with uveitis has never been explored.

In their work published in The FASEB Journal, Dr. Menko and her lab used high-resolution microscopy to look at the whole eye and the surface of the lens. The first thing the researchers wanted to know was, do immune cells interact with the lens in this experimental model of uveitis? They were shocked at what they saw.

“In our previous study in which the cornea was wounded, we saw a small number of immune cells on the surface of the lens, acting almost like sentinels,” says Dr. Menko. “In this case, it was like a battering ram. There were dozens of immune cells, and different types of them, including T-cells and macrophages. It’s clearly a robust immune response and could reflect in part that inflammation in uveitis is so severe.” 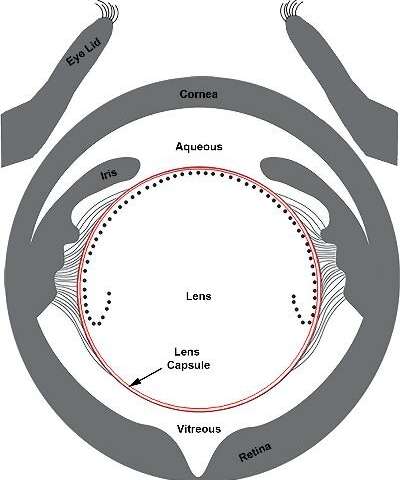 The researchers then monitored this immune response to the lens over the course of 26 days, as inflammation sets in at day 14 (first panel, below), reaches its peak at day 19 (second panel) and begins to resolve by day 26 (third panel).

Using their high-powered microscopes, they observed different regions of the lens’ surface. On either side of the lens are two fluid-filled chambers—the aqueous humor at the front of the eye between the lens and the cornea, and the vitreous humor at the back of the eye, separating the lens and the retina (illustration below). In uveitis, one or both chambers, become filled with immune cells. However, it’s been thought that the lens is protected from these immune cells by the thick protein-rich layer that surrounds it, called the lens capsule.

JodiRae DeDreu, a Ph.D. student in Dr. Menko’s lab at Jefferson and first author of the study, stained the lens with fluorescent markers to label a protein that makes up the capsule in red, immune cells in green and their nuclei in blue. She then captured high resolution images and used imaging software to create 3D renderings of the capsule to detect changes in its structure. The software allowed her to look at all three colors at the same time, remove one or two, or make one of the colors transparent.

“When we look at the colors together, we see these blue dots, which are the nuclei of the immune cells, sticking out of the red surface of the lens capsule,” (left panel, below) explains DeDreu. “When you take away the blue nuclei, we see these deep pits or divots along the capsule (right panel, below). This is evidence that the immune cells are actually integrating into the lens capsule, which had never been shown before.”

Not only do the number of divots increase over time from day 14 to day 19, but also become deeper, indicative of increasing invasion into the lens capsule as the disease progresses. Furthermore, when DeDreu makes the red label of the lens capsule transparent, she can capture the morphology of the immune cells that have integrated within the capsule in great detail. In the right panel below, the immune cells, labeled in green, have flattened themselves out to fit within the lens capsule.

Their collaborators in Dr. Stepp’s lab confirmed this by using a scanning electron microscope, which can capture detailed changes on the surface of the lens capsule. They found many bumps, as illustrated in the images below, indicating regions where immune cells had become integrated within the lens capsule. This correlated with the fluorescent labeling results from the Menko lab.

Immune cells are well-equipped to get to places where there might be damage or infection, secreting enzymes that break down tissues that are in the way. But are they able to get past the thick lens capsule? In a surprising finding, the researchers found that some immune cells were able to do so (first panel below, immune cells are present past the red lens capsule), and actually infiltrate into the lens tissue (in the second panel below, the immune cell is embedded in the lens tissue in gray). 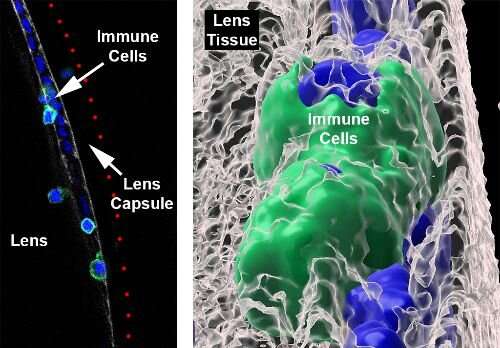 “Till now, the mechanisms for damage that happen in this region of the eye after uveitis have been poorly understood,” says Dr. Menko. “For the first time, we’ve been able to provide evidence that immune cells could be driving this damage, particularly to the lens.” It also opens up possibilities of understanding lens pathology in other eye diseases like glaucoma.

Interestingly, they also found that even after uveitis begins to resolve at day 26 and the majority of immune cells were gone, there were still some that remained integrated on the surface of the lens capsule (second and third panels, below) and infiltrated into the lens tissue itself (first panel, below).