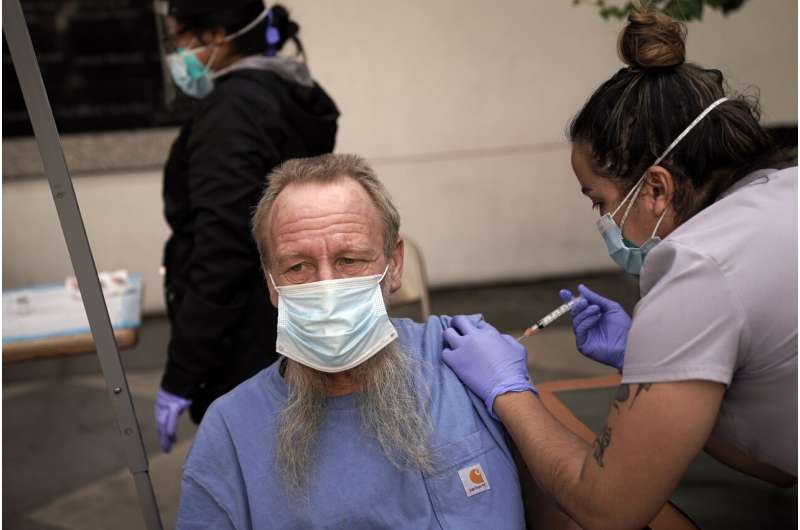 Homeless Americans who have been left off priority lists for coronavirus vaccinations—or even bumped aside as states shifted eligibility to older age groups—are finally getting their shots as vaccine supplies increase.

While the U.S. government has only incomplete data on infections among homeless people, it’s clear that crowded, unsanitary conditions at shelters and underlying poor health increase the danger of COVID-19 infections, severe complications and death.

COVID-19 outbreaks have been documented at homeless shelters in cities such as Boston, San Francisco and Seattle. Vaccinating in vulnerable areas will be a key to achieving herd immunity, the goal of building a barrier of protected people to stop uncontrolled spread.

“It was important for me to protect myself and the health and welfare of others,” said Cidney Oliver, 39, who got her first dose of Moderna vaccine April 7 at the Seattle YWCA shelter where she sleeps.

Wanona Thibodeaux-Lee, 43, has lived in several Seattle shelters while trying to get back on her feet, most recently at WHEEL, a 26-bed women’s shelter in a church basement. On April 5, she received the single-dose Johnson & Johnson vaccine.

“I feel like I can move around without anyone getting me sick,” she said. “It’s good to know that I don’t have to go back for a second one.” 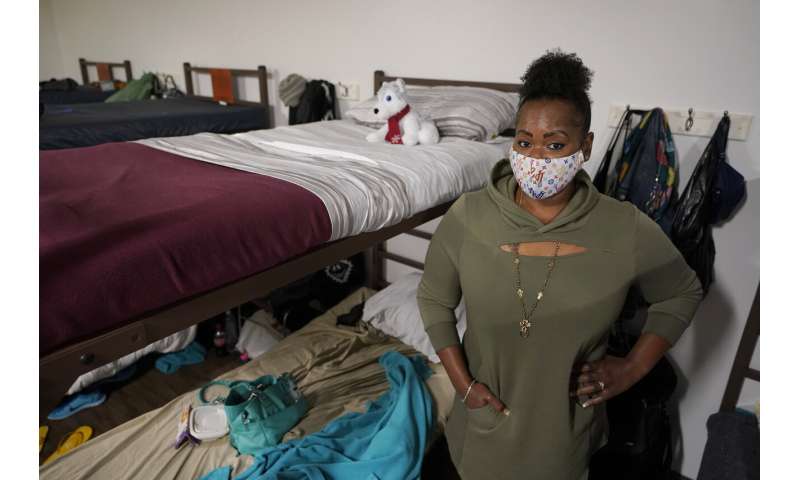 The single-shot vaccine is preferred by many clinics who serve homeless people and by homeless people themselves, said Bobby Watts, CEO of the National Health Care for the Homeless Council.

The U.S. government on Tuesday recommended a “pause” in using the Johnson & Johnson vaccine to investigate reports of rare but potentially dangerous blood clots. It is a temporary setback in the drive to vaccinate homeless people, forcing organizers this week to switch to other vaccines or postpone events.

“Assuming it is ultimately found to be safe and effective, it will be harder to convince people—especially people experiencing homelessness—that it is safe,” Watts said.

Seattle, with the third-largest homeless population in the U.S., has seen at least 1,400 of them test positive for COVID-19 and 22 die since the pandemic began. More than 100 shelters and other homeless service sites have had outbreaks. Seattle’s health department will switch to the Moderna vaccine for its planned events targeting homeless people. 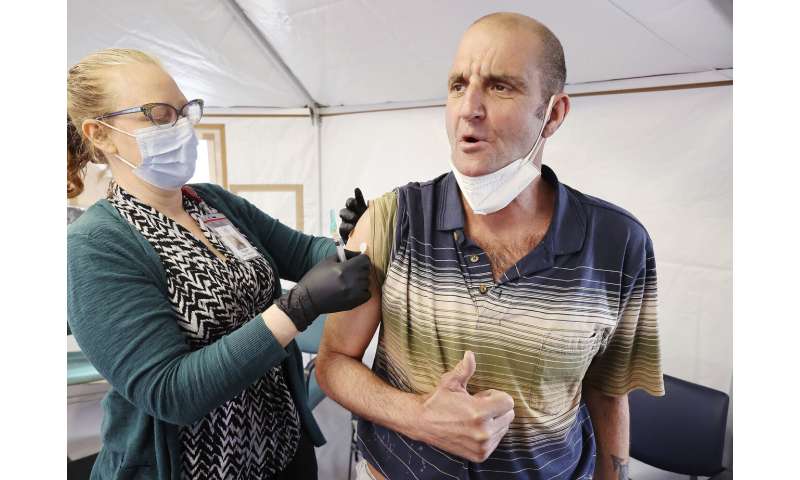 Homeless people are at greater risk of being infected and greater risk of hospitalization and death than the average person, Watts said. Shorter lifespans—chronic homelessness can take 20 to 30 years off a person’s life—should have qualified them for vaccination priority much earlier, Watts said.

Instead, political pressure to vaccinate older adults moved them to the back of the line. Clinics serving them, Watts said, “were put in the unreasonable position of saying, ‘I know all of you are at high risk, but I can vaccinate only the few or you who are over age 70.'”

Now, that’s changing. With eligibility opening widely, homeless service providers are mobilizing to get vaccine to shelters and encampments.

In Nashville, 19 organizations have set a goal of bringing the vaccine to all homeless people by Memorial Day. In Salt Lake City, vaccinators offer incentives such as $5 grocery store gift cards or donated pizza. The Los Angeles Fire Department is delivering vaccine to the tent cities of Skid Row, MacArthur Park and other neighborhoods. 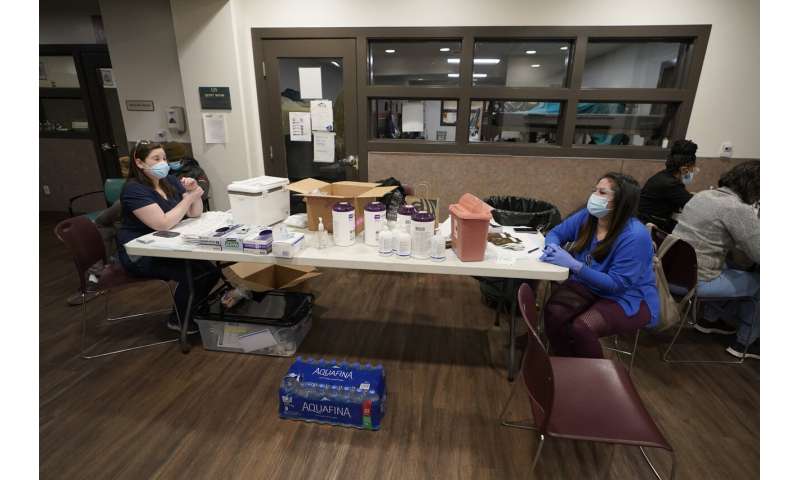 “Looking people in their eyes, telling them the truth about the vaccine … I love what I do every day,” said Melanie McConnaughy who works for Community Organized Relief Effort, a nonprofit that’s helping Los Angeles firefighters at mobile vaccine events. Her job is to answer questions and build trust.

She described a homeless woman, covered in tattoos, who at first said she didn’t want the shot because she didn’t like needles. Pointing to her tattoos, “we said, ‘How can you say you’re afraid of needles?’ She said, ‘You’re right, you’re right. I’m going to go tell my brother. He’s over there.'” Both siblings got vaccinated that day.

“We’re all in it together. The more shots in arms the better,” Ramirez said. “The more folks who are vaccinated, the stronger we are in building herd immunity and the faster we can reopen our city and engage with each other like we were before.” 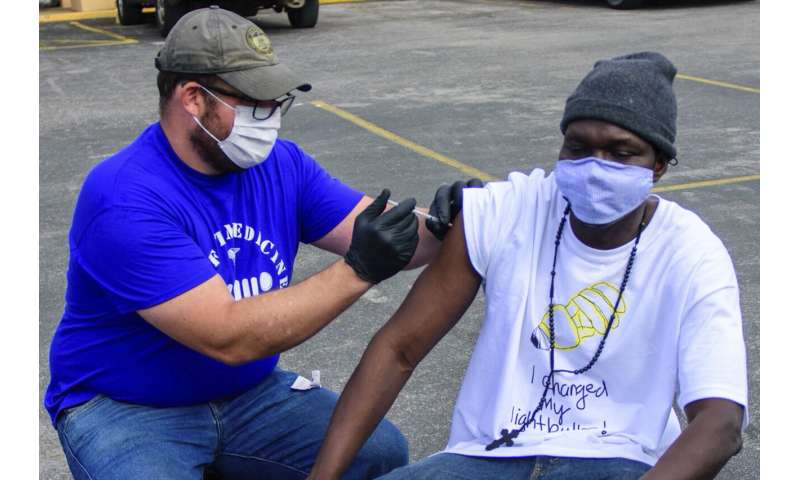 Giving outreach workers a unified message was important in Nashville, where organizers put together a one-page fact sheet about the vaccines in English and Spanish.

“Let’s please all sing off the same song sheet,” said Brian Haile, CEO of Neighborhood Health in Nashville. “This is Music City, so we have a vaccine song sheet.”

All homeless adults in Washington, D.C., became eligible for the vaccine in January, long before most states and before the J&J vaccine was available. The city has fully vaccinated more than 1,300 by giving out yellow bracelets printed with second-dose appointment dates as reminders.

The district also trained key shelter residents “so they could be ambassadors for the vaccine and talk about it to their peers,” said Dr. Catherine Crosland of Unity Health Care, a clinic system serving homeless people. 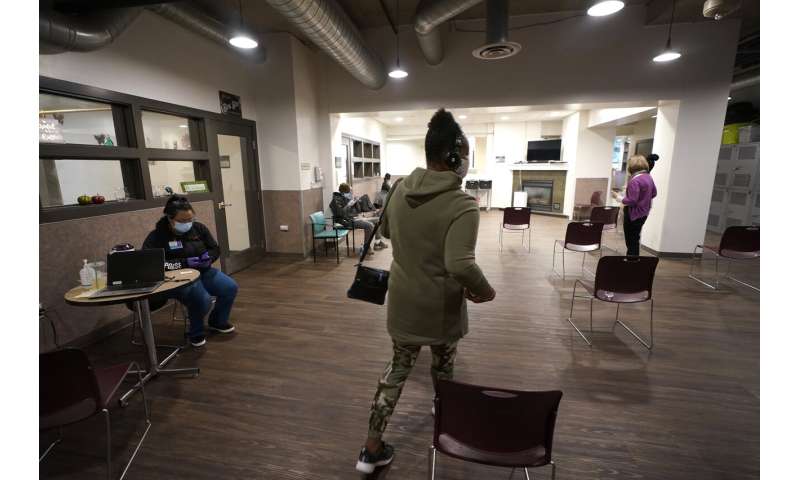 Walk-up vaccine events are crucial for a population with limited access to cars, cellphones or Wi-Fi, organizers say.

In Salt Lake City, the health department and a homeless clinic have given more than 1,000 doses of vaccine to homeless people. Pizza, candy bars, “whatever we can get donated,” helps keep people waiting if there’s a line, said Janida Emerson, CEO of Fourth Street Clinic.

“In our area, there are 10,000 people experiencing homelessness. We’ve got a ways go to. It’s a start,” Emerson said.

Even before the pandemic, homelessness had been rising across the U.S., with the biggest increases seen outside the shelter system—those people living on sidewalks, under bridges and in abandoned buildings.

The pandemic’s economic downturn uprooted people from their homes despite a moratorium on evictions. Cities closed crowded shelters to prevent infection, offering rooms in motels, but some shelter users who didn’t want to move to unfamiliar neighborhoods joined those on the streets. 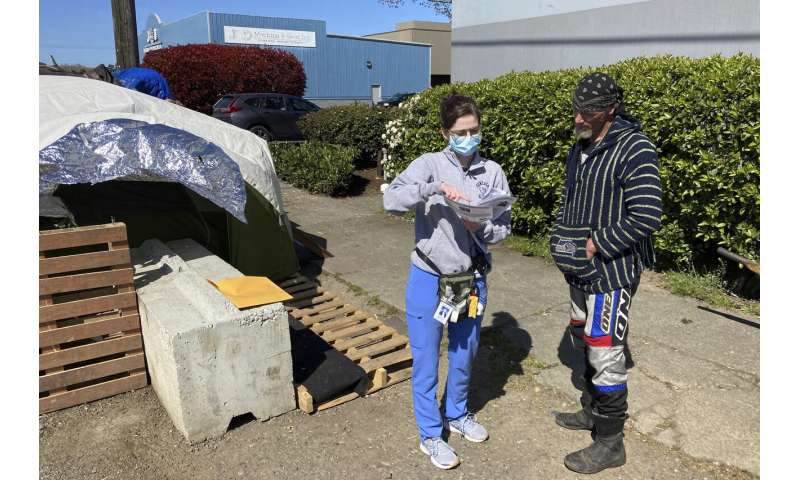 How much the pandemic is further increasing the number of homeless Americans isn’t entirely clear. Many cities, under stay-at-home orders, canceled their annual homeless counts this year.

In January 2020, a one-night tally showed 580,000 homeless people in the United States. Advocates say that total should be multiplied by three to get the true scope of Americans using shelters and living on the streets.

In Seattle, it will take at least two months to get the vaccine to an estimated 575 housing, shelter and service sites, 85 unsanctioned encampments and nine youth service sites.

For Oliver, the pandemic was the least of her worries when she arrived in Seattle last month without family, friends or a job.

“Abuse, unemployment, losing everything,” Oliver said. “My life, it wasn’t that great. I was experiencing things prior to COVID that prepared me to deal with this pandemic.” 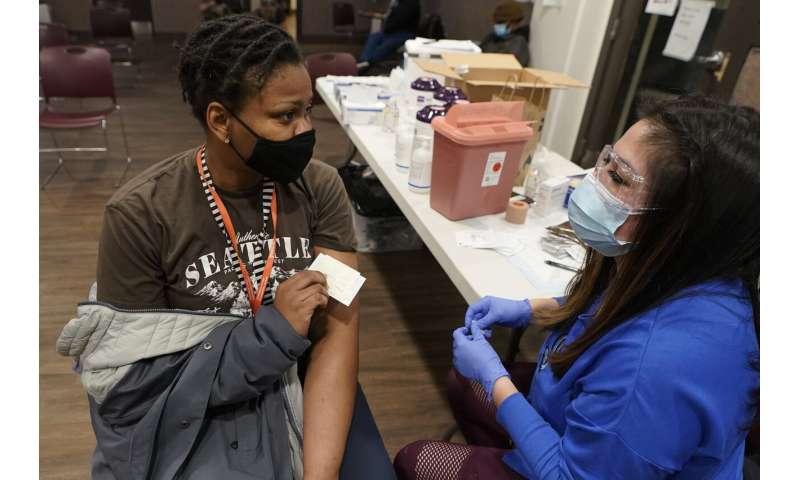 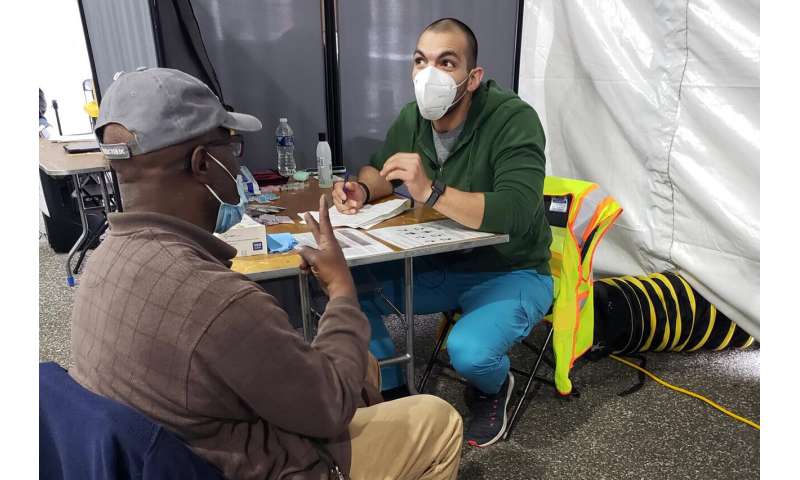 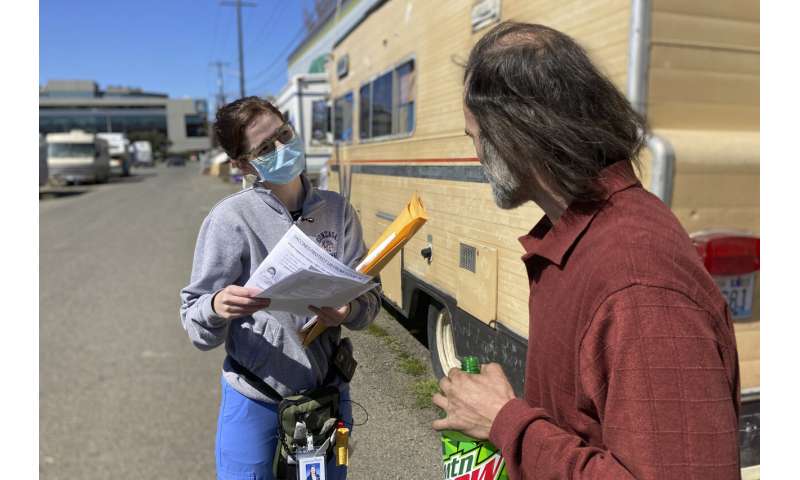 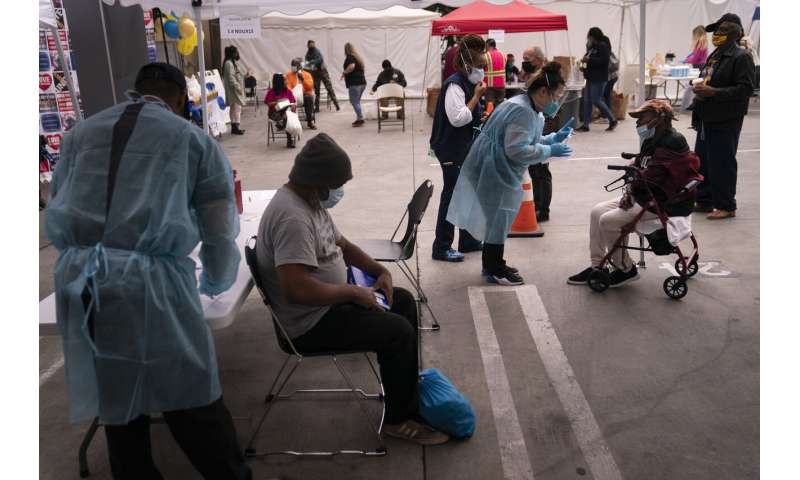 She says Seattle has been a good move so far. She found a job and is learning about housing options from the staff at Angeline’s, the YWCA facility where she keeps her top bunk neatly made.