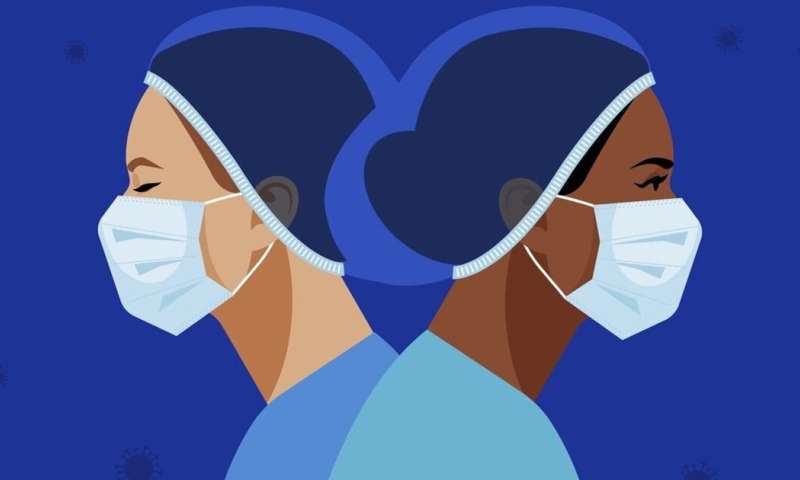 The Year of the Nurse brought increased attention to the “heroes of health care”: nurses working on the front lines of COVID-19. However, despite public displays of thanks, it’s becoming clear that many nurses are not getting the support they need to feel safe on the job and to maintain their own health and well-being.

As researchers in psychology and nursing at the University of Windsor, we sought an in-depth understanding of how nurses in a border city felt about working during the pandemic.

Commuting in a border city

As a border city, Windsor, Ont., is home to nurses who reside and work locally, but also a significant number who commute daily to hospitals in Detroit, Mich. Early in the pandemic, Detroit emerged as a “hot spot” partly due to significant racial inequalities and health disparities in the city’s population.

Detroit hospitals depend on their Canadian nurse employees. In 2016, 20 percent of the nurses working at Henry Ford Hospital were Canadian, and a total of 1,600 Windsor residents reported working in health-care settings in Detroit. The continued ability of these hospitals to operate during and after the pandemic depends on the retention of Canadian personnel.

In May and June 2020, our team interviewed 32 female and five male nurses living in Windsor and working in health-care settings in Windsor (20 nurses) or Detroit (17 nurses). They worked on intensive care units, COVID-specific units, labor and delivery units, in emergency departments and field hospitals, with experience in nursing ranging from 1.5 to 36 years.

Concerns about family and mental health

The support that nurses felt from their organization and managers varied from workplace to workplace and unit to unit. A few felt well supported, but many reported they were not valued, citing organizations that furloughed them, stopped employer contributions to retirement funds or did not provide adequate PPE. One participant noted:

“I didn’t sign up for not having myself protected, you know, I think I deserve as a nurse to at least have that.”

Despite increasing levels of depression and anxiety, there was a strong sense that referrals to employee assistance plans (EAPs) were not sufficient. Overall, we found that nurses were surprisingly resistant to the idea of formal mental health supports. They felt more comfortable seeking support from their coworkers or “work family” than non-nurse family/friends or organizational supports. Many expressed fears that seeking help from hospital administration would be perceived as a sign of weakness. One participant stated:

“Heaven forbid, you say mental health or stress … because then they’ll take you from your unit, and say, put you at the front door as a greeter.”

Nurses also expressed concerns about their own health and the health of family members. They described difficulties balancing quality patient care with “cluster care,” which limited their time in patient rooms, and the emotional toll of “death over Facetime” as one participant called it: holding electronic tablets as dying patients said their goodbyes to family.

They experienced difficulties navigating rapidly changing hospital policies (sometimes during a single shift), discrepancies between governmental and hospital recommendations, do not resuscitate orders that were either avoided or forced, and inadequate access to PPE.

Many reported sleep issues, nightmares, fatigue, increased irritability, increased alcohol consumption, unhealthy eating habits and use of sleep aids and cannabis. Many self-isolated from their families and missed out on the day-to-day moments and key developmental milestones of their children. One participant recounted:

Many nurses spoke of inequity and moral injury. They expressed frustration about doctors and men with facial hair receiving better PPE, temporary employees (that is, travel nurses) getting better pay and/or hours, being reassigned to multiple units and doing non-nursing tasks like cleaning COVID-19 positive rooms. Nurses felt better prepared to be reassigned if they volunteered, but not if it was forced (and some were).

Some nurses were encouraged to purchase their own PPE to use at work, for example, face shields from Amazon or even dollar store raincoats. Almost everyone we interviewed expressed concern about second and third waves and whether the hospitals would be prepared.

Nurses expressed appreciation regarding the community responses (for example, clapping, food donations, skipping lines at businesses) but also felt a lot of stigma as potential “disease carriers.” One participant shared:

“[The public] keep saying: “Oh, nurses are heroes. Doctors are heroes. They’re doing so much for us.” You’re out in scrubs and they’re like, “They’re contaminated, get them away, they’re infectious.'”

There were some differences in responses between nurses employed in Detroit and those working in Windsor. Overall, nurses working on the Michigan side of the border reported greater patient mortality, PPE shortages, community stigma and dissatisfaction with hospital administration. However, these findings are complicated by the much more rapid onset and greater intensity of the COVID-19 pandemic in Detroit compared to Windsor, and therefore can’t be interpreted with confidence.

Most nurses said that they were not planning on leaving nursing, but several are considering changing units or looking to a career change if the pandemic continues for many months or even years. Nurses also highlighted issues that the public may not be aware of: a moratorium on organ donation, decreased quality of care or risk of family-patient online meetings getting hacked.

Rapid intervention and availability of supports are needed to quickly address symptoms of mental health issues and reduce loss in the nursing workforce that has been observed after previous outbreaks, such as SARS, which could exacerbate a pre-pandemic shortage of nurses in Canada.