For decades, we’ve been told that a calorie is a calorie and as long as we eat fewer of them than we burn, we’re sure to lose weight.

Increasingly, though, it seems that when it comes to staying healthy, it’s not only what you eat that matters, but when you eat.

This may be all down to our circadian rhythms. These 24-hour cycles govern everything from when we feel sleepy to when our immune cells are most active, enabling our bodies to prepare for regular events — including the arrival of food. 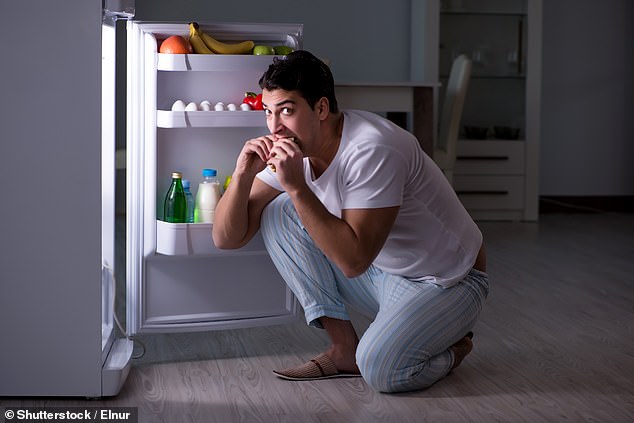 It seems that when it comes to staying healthy, it’s not only what you eat that matters, but when you eat (file image)

They also help our organs and tissues to switch tasks and recuperate during the times they’re least likely to be active.

Our digestive system is no exception. We produce less saliva at night; our stomach produces fewer digestive juices; the intestinal contractions that move food through our guts slow down; and we are less sensitive to the hormone insulin, which mops up glucose from our bloodstream so it can enter our cells and be used as fuel.

All of this makes sense: for most of human history, eating was done during the day and night-time was for sleep. So our bodies are set up to process food more efficiently during the day. 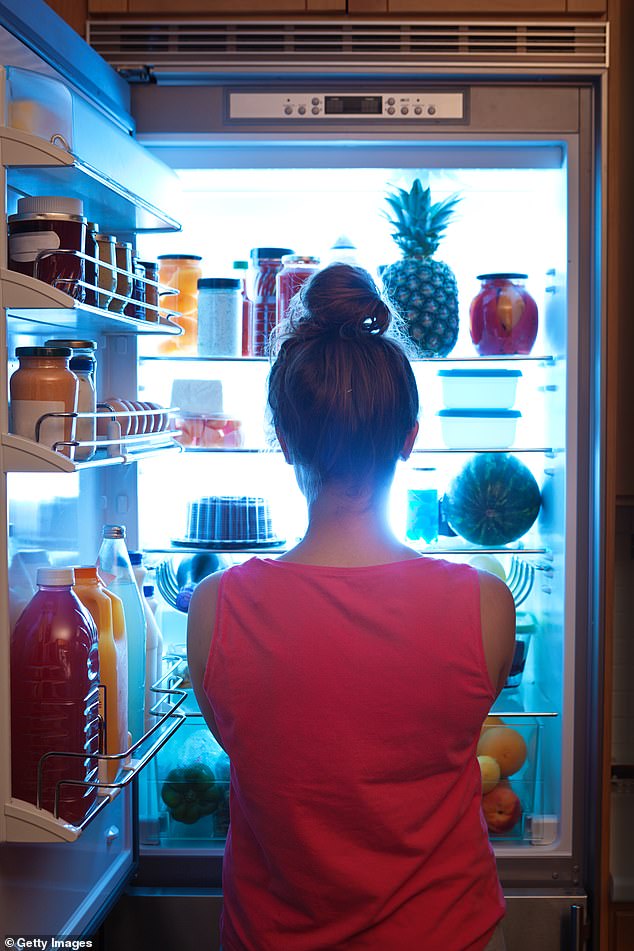 The invention of electric light has made it far easier to stay up late and keep eating long after sunset, with potential negative consequences for our health (file image)

‘We have been hard-wired to go through this daily cycle,’ says Professor Satchin Panda, who researches circadian rhythms at the Salk Institute in California.

However, the invention of electric light has made it far easier to stay up late and keep eating long after sunset, with potential negative consequences for our health.

For instance, research recently presented at an American Heart Association conference revealed that the more a woman ate after 6pm, the worse her heart health was, with a greater risk of higher blood pressure and body mass index, and poorer long-term control of blood sugar. Other studies have found that people who eat late have a greater risk of obesity and type 2 diabetes.

The results of animal studies into compressing the window when food is eaten are compelling.

In one, Professor Panda fed two groups of mice the same high-fat, high-sugar diet — the only difference being one group had 24/7 food access and the other could eat only during an eight-hour window in their ‘daytime’.

The first group gained weight and began to develop high cholesterol and type 2 diabetes, whereas the group on a time-restricted diet remained relatively slim and healthy — despite consuming the same number of calories.

Remarkably, time-restricted eating was even able to reverse type 2 diabetes in mice.

Preliminary research suggests meal timing may also be important for human health, with studies finding that those who eat dinner an hour before bedtime have poorer blood sugar control than those who dine earlier, and that dieters who consume the bulk of their calories before 3pm lose around 25 per cent more weight than those who feast later.

Researchers, however, say it is too early to issue detailed advice on meal timings.

For one thing, we don’t yet understand why late-night, or extended, eating may be bad for us.

Nutritionists at the University of Aberdeen are investigating whether consuming a large breakfast is beneficial for weight loss and if it alters the way people metabolise food compared with consuming a greater proportion of their calories later in the day.

Professor Panda believes the reason time-restricted eating is better for our health is because it provides our guts with more opportunity to repair and recuperate.

Up to one-tenth of the cells lining our guts is damaged every day by the normal course of digestion, and eating a late-night meal followed by an early breakfast leaves very little time for any repairs to be made.

‘Just as we cannot repair a road when there is traffic, it is difficult to repair our guts when there is food in our stomachs,’ says Professor Panda.

Eventually, the barrier between the inside of the gut and the rest of the body can become ‘leaky’, allowing allergy-causing chemicals and bacteria through, increasing general levels of inflammation in the body and triggering ill health, he adds.

It may also be important to keep your meal times, whatever hour you choose to eat, regular.

This is because eating at unexpected times can shift the timing of the ‘clocks’ in our digestive tissues, causing them to become desynchronised from clocks elsewhere in our bodies, and making our metabolisms less efficient.

Research from last month, for example, suggests that having breakfast later at weekends than you do during the week will lead to weight gain.

‘The general advice is to have regular meal patterns and allow your body to have periods of non-consumption or fasting,’ says Dr Gerda Pot, a visiting lecturer in nutritional studies at King’s College London.

‘Perhaps going back to a pattern of three meals per day without snacking, like our grandparents and great-grandparents, would not be so bad after all.’