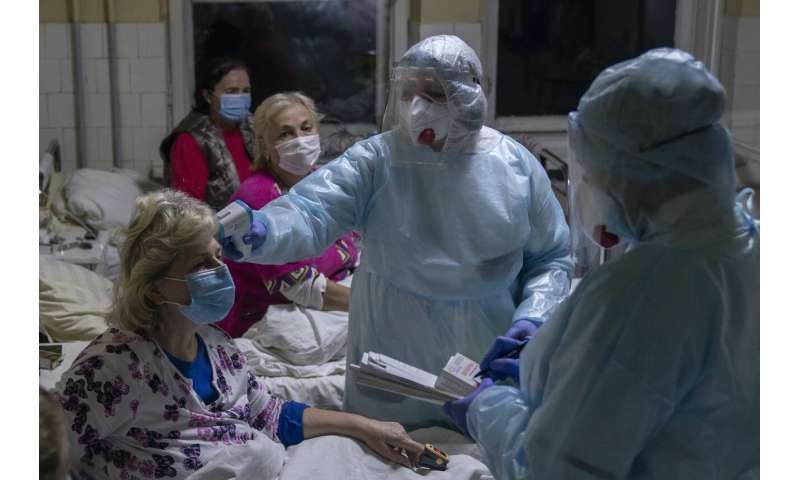 Coronavirus infections in Ukraine began surging in late summer, and the ripples are now hitting towns like Stebnyk in the western part of the country, where Dr. Natalia Stetsik is watching the rising number of patients with alarm and anguish.

“It’s incredibly difficult. We are catastrophically short of doctors,” says Stetsik, the chief doctor at the only hospital in the town of 20,000 people. “It’s very hard for a doctor to even see all the patients.”

The hospital is supposed to accommodate 100 patients, but it’s already stretched to the limit, treating 106 patients with COVID-19.

Early in the pandemic, Ukraine’s ailing health care system struggled with the outbreak, and authorities introduced a tight lockdown in March to prevent hospitals from getting overwhelmed.

The number of cases slowed during the summer but began to rise again quickly, prompting the government at the end of August to close Ukraine’s borders for a month. Despite that, the number of positive tests in the country reached a new peak of 4,661 a day in the first weekend of October.

Overall, COVID-19 infections in the country have nearly doubled in the past month, topping 234,000.

“The number of patients is rising, and an increasing share of them are in grave condition,” Stetsik told The Associated Press of the situation in Stebnyk, a quiet town in the Lviv region. “The virus is becoming more aggressive and more difficult to deal with.” 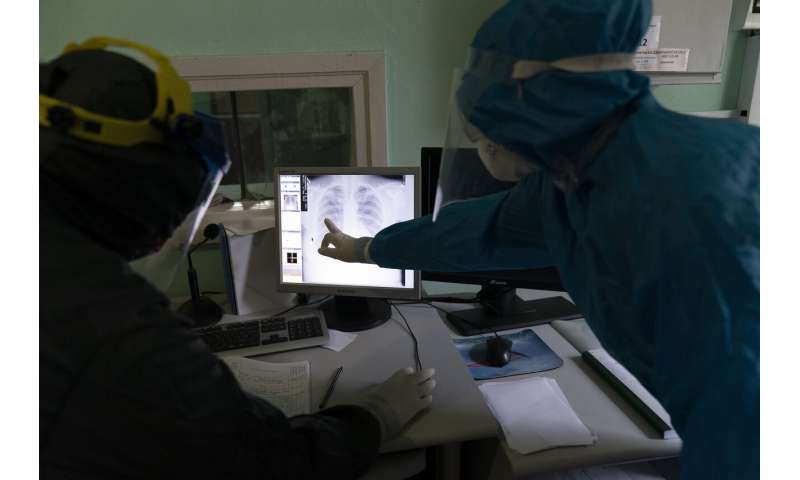 She said many of those doing poorly are in their 30s, adding that an increasing number of them need expensive medication.

“There is a similar situation across entire Ukraine,” she said, adding that hospitals have run out of funds to provide drugs, forcing patients in some areas to buy their own.

The World Health Organization warns that the number of infections in Ukraine could continue to grow and reach 7,000-9,000 a day.

The government wants to avoid imposing a new lockdown, but officials acknowledge that the rising number of infections could make it necessary. It has sought to introduce a more flexible approach to minimize the economic damage, dividing the country into various zones, depending on the pace of infections.

At a meeting Monday with officials in Kyiv, President Volodymyr Zelenskiy chastised them for failing to do enough to slow the spread and taking too long to provide necessary supplies. 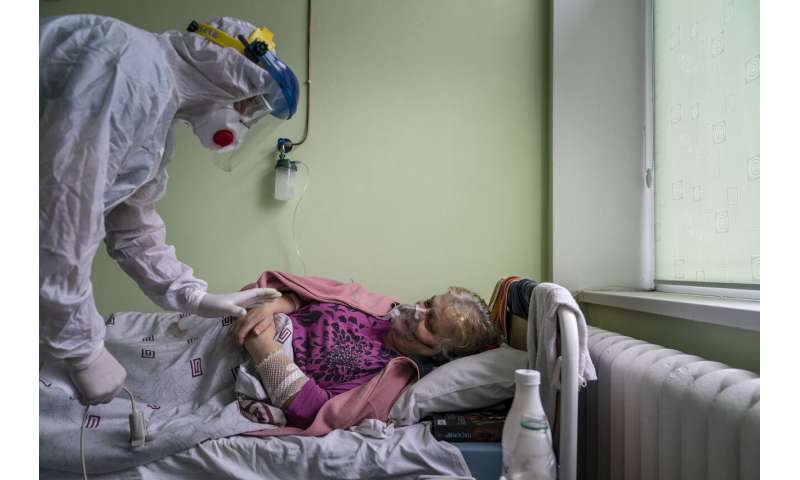 “We spend weeks on doing things that must be done within days,” he said.

Zelenskiy specifically urged them to move faster on ensuring that hospitals have enough supplementary oxygen, noting that only about 40% of beds for COVID-19 patients have access to it.

Ukraine’s corruption-ridden economy has been drained by a six-year conflict with Russia-backed separatists in the eastern part of the country, and Zelenskiy’s administration inherited health care reforms from his predecessor that slashed government subsidies, leaving hospital workers underpaid and poorly equipped.

Official statistics show that 132 medical workers have died from the coronavirus, although the figure doesn’t include those who tested negative but had symptoms typical for COVID-19. 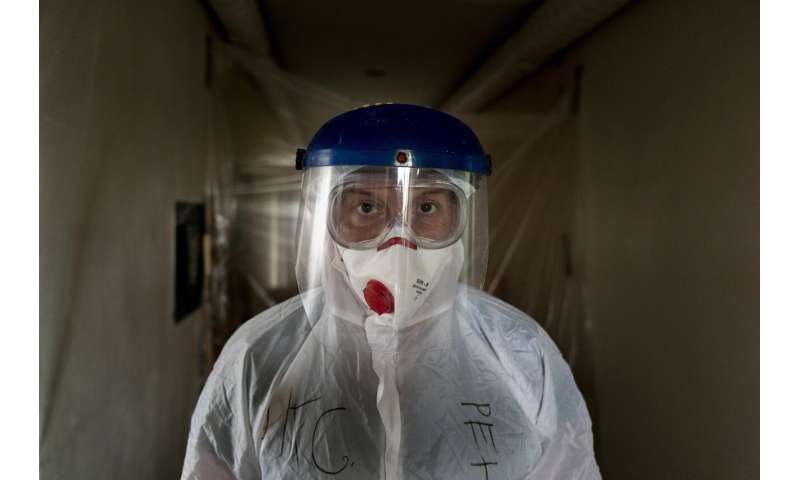 One of them was Ivan Venzhynovych, a 51-year-old therapist from the western town of Pochaiv, who described the challenges of dealing with the outbreak in an interview with the AP in May.

Venzhynovych died last week of double pneumonia, which his colleagues believed was caused by the coronavirus, even though he tested negative for it.

“He certainly had COVID-19,” said Venzhynovych’s widow, Iryna, a doctor at the hospital where he worked. “There are many infections among medical workers, some of them confirmed and others not.”

The government pays the equivalent to $56,000 to families of medical workers who die from the coronavirus. But Venzhynovych’s widow can’t receive the payment because he tested negative.

As the number of infections soars, many lawmakers and top officials are testing positive, including former President Petro Poroshenko, who was hospitalized in serious condition with virus-induced pneumonia. 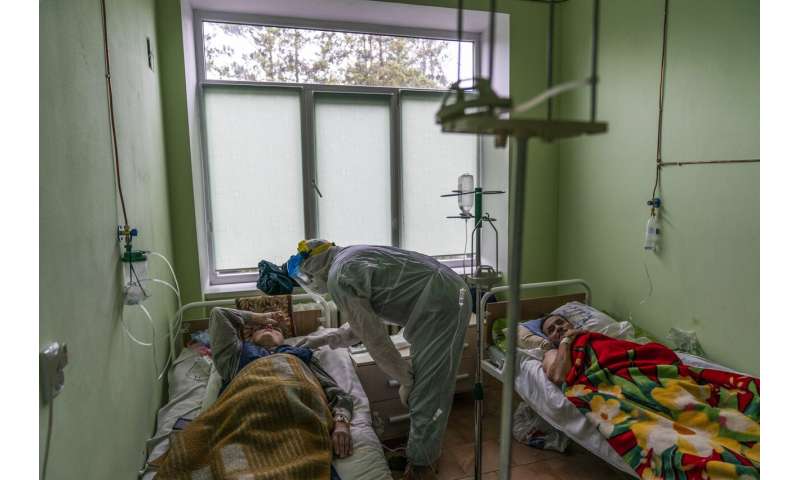 Medical professionals want the government to bring back a sweeping lockdown, pointing to the scarce resources for the health care system.

“It’s possible that Ukraine would need to return to a tight quarantine like in the spring. The number of patients is really big,” said Dr. Andriy Gloshovskiy, a surgeon at the hospital in Stebnyk.

He blamed the new infections on public negligence.

“People are quite careless, and I feel sorry that they aren’t impressed by numbers,” he said.

Gloshovskiy said he had to switch to treating COVID-19 patients because of the personnel shortage.

“I had to change my specialty because my colleagues simply wouldn’t be able to cope with it without me,” he said.

Health Minister Maxim Stepanov acknowledged that the shortage of doctors and nurses is a big problem.

“We may increase the hospital capacity and improve oxygen supply, but we could just be simply short of doctors,” he said. “Every system has its limit.” 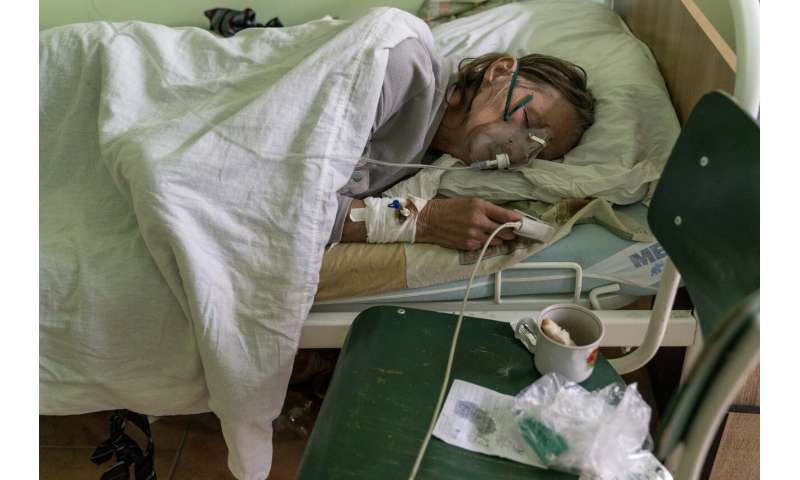 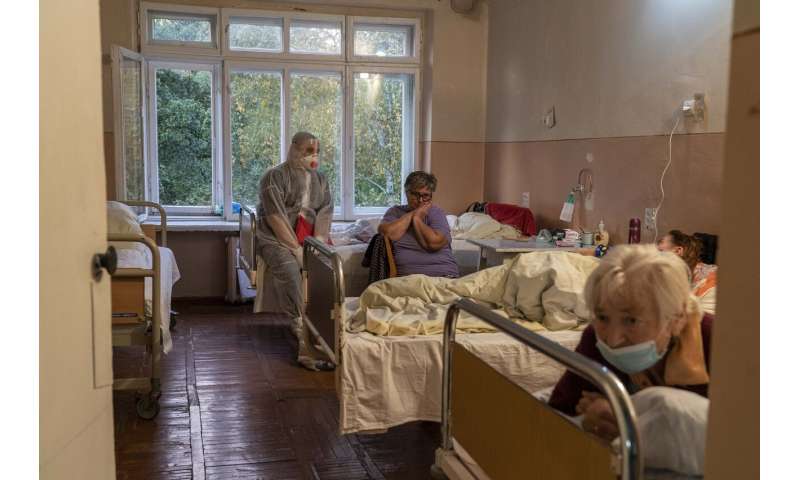 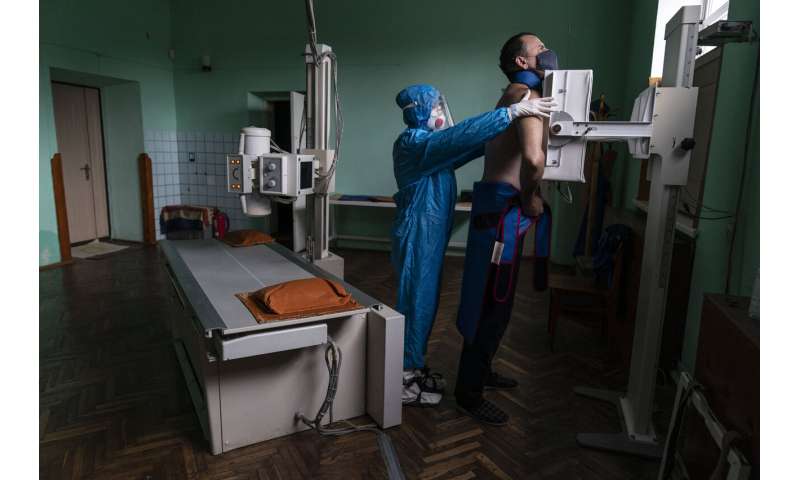 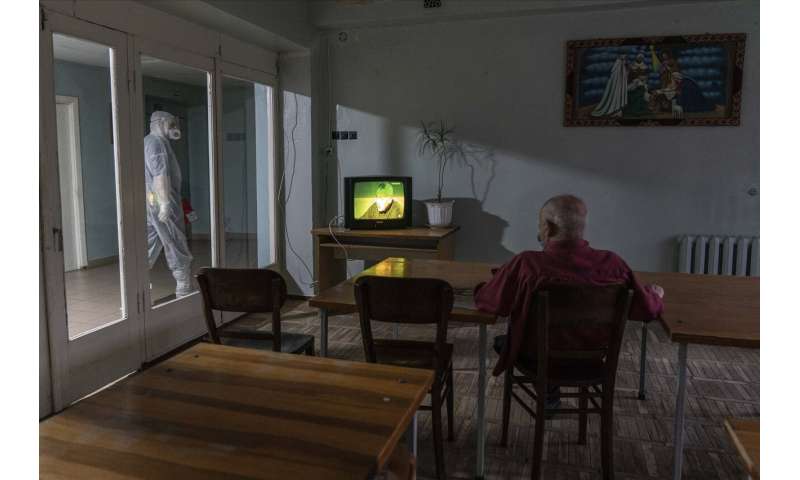 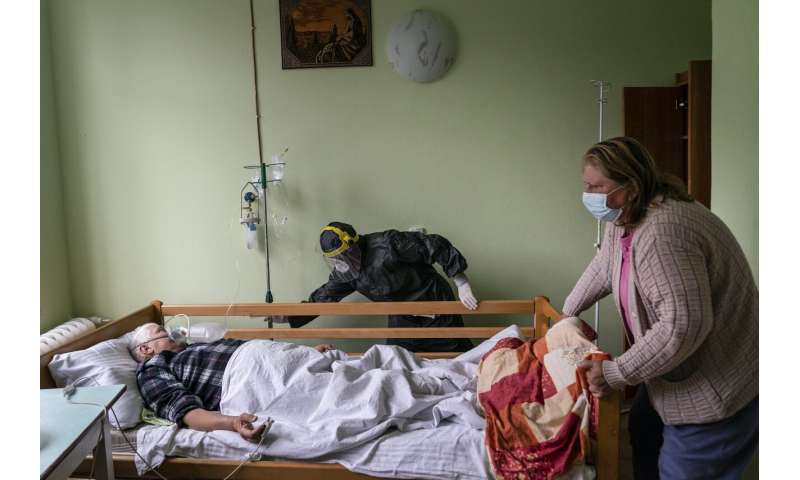 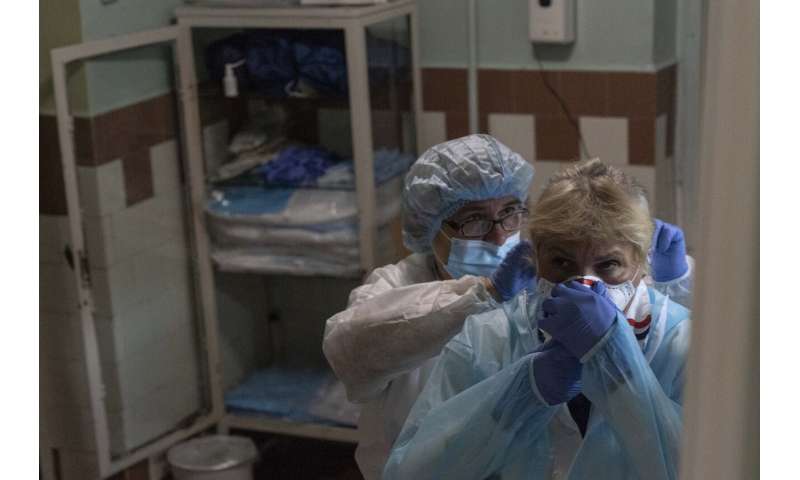 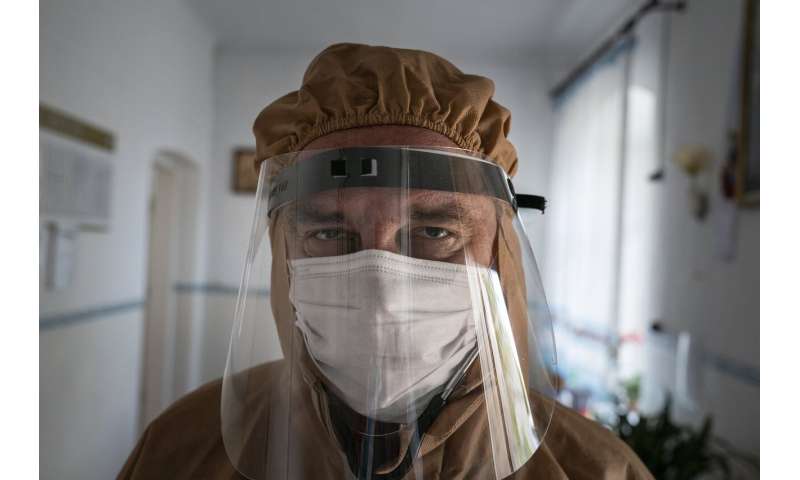 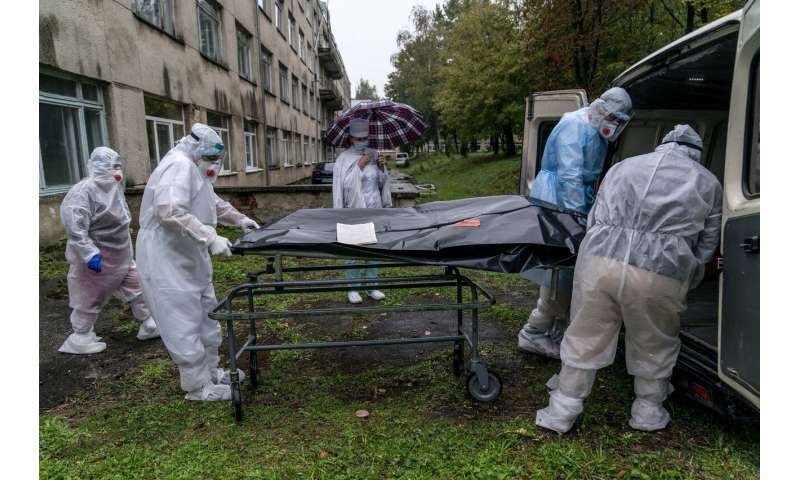 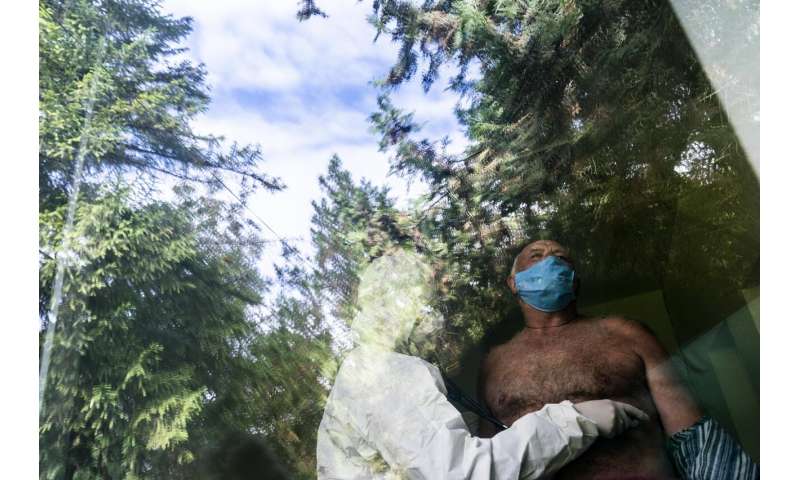 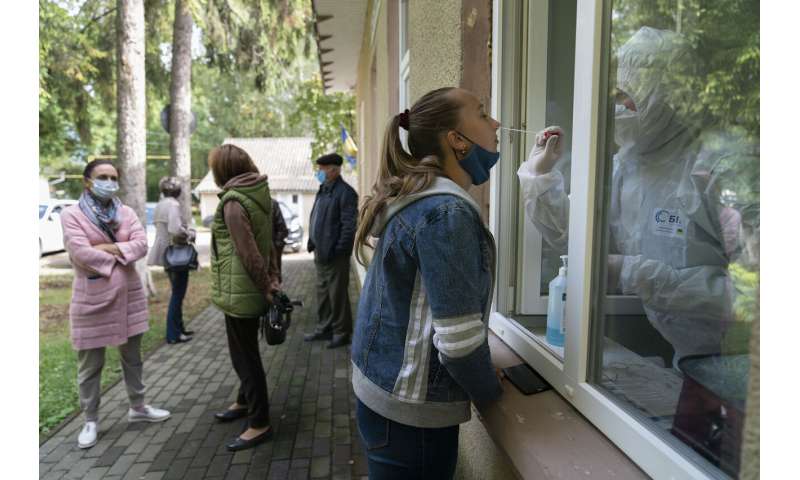 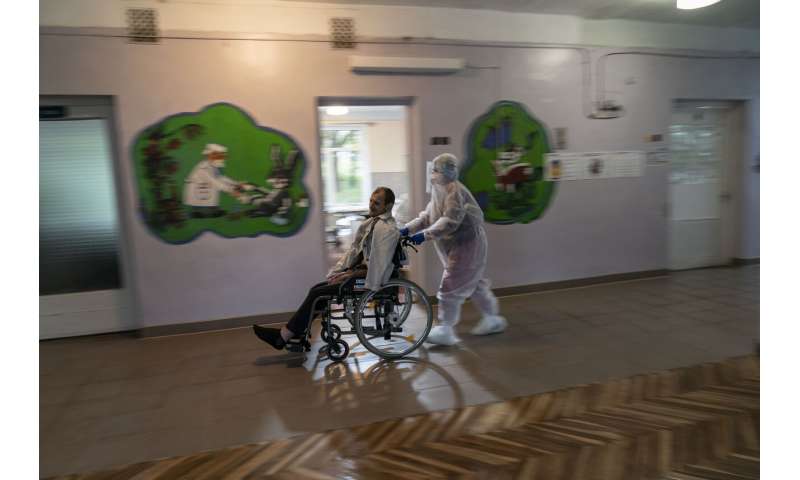 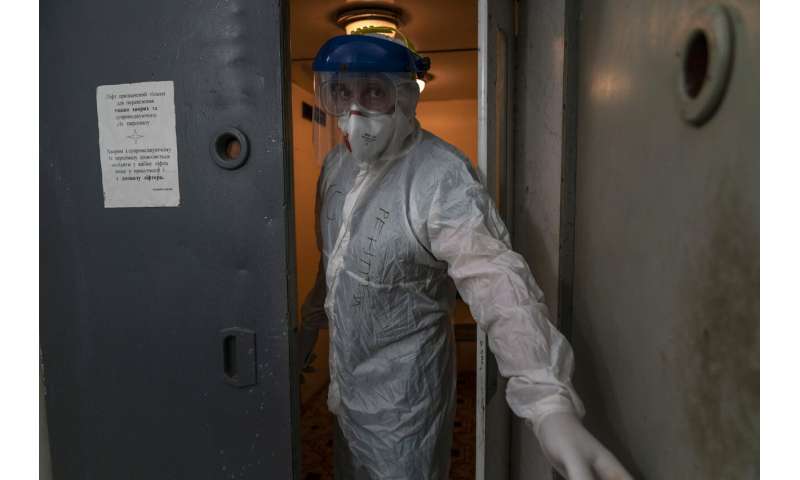 A tight lockdown would be a severe blow to the already weakened economy, Stepanov said, warning that authorities could be forced to do it anyway.

“If the situation takes a menacing turn, the Health Ministry would propose to return to tough quarantine measures,” he said.

At the Stebnyk hospital, some patients said they only realized the coronavirus threat after falling ill.