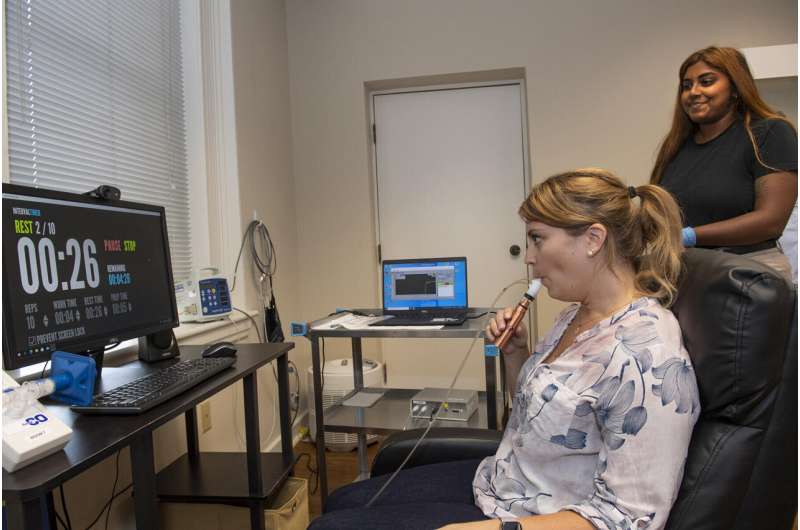 That hidden presence of ethanol in e-liquids raised an important question for public safety and law enforcement: Could unknowingly vaping alcohol cause a person who hadn’t been drinking to fail a sobriety test?

To answer that question, Peace and co-principal investigator Alison Breland, Ph.D., an associate research professor in Department of Psychology in the College of Humanities and Sciences and Center for the Study of Tobacco Products at VCU, launched a human clinical study in collaboration with the Virginia Department of Forensic Science and VCU Police Department.

The researchers had 13 participants vape e-liquids with either a concentration of 20% ethanol or 0% ethanol.

They found that breath ethanol concentrations were detectable by the preliminary breath test immediately (less than one minute) after vaping an e-liquid containing 20% ethanol.

However, when the police officer waited 15 to 20 minutes—the standard waiting period in a DUI roadside stop—after the person vaped an e-liquid with 20% ethanol, the preliminary breath test had no result, as they predicted. The researchers also found that vaping ethanol did not impact the standardized field sobriety test, and the evidentiary breath test was not affected by vaping ethanol at all.

“We’re reporting negative results and we’re thrilled about that,” Peace said. “When we ran the study, we found that the 15-to-20-minute wait period is solid. We needed to get that into the literature because there are attorneys who are trying to use vaping as a reason to get somebody out of a DUI charge. What we’re now able to say is vaping does not impact the preliminary breath test if a state or jurisdiction is maintaining that 15-to-20-minute wait period.”

The researchers’ findings will have an impact beyond law enforcement. Alaina Holt, a doctoral student in the Integrative Life Sciences Program at VCU who is working with Peace, explained that the findings should be considered in other contexts of alcohol testing, including workplace screening tests and vehicle ignition interlock systems.

“Some agencies and industries use a preliminary breath test device to indicate alcohol consumption. If they don’t adhere to a 15-to-20-minute wait period, then somebody who has been vaping continuously may test positive in that scenario,” Holt said. Peace noted, “It’s important because people’s lives are on the line at that point.”

The findings of the study, “Impact of Vaping Ethanol on the Roadside Field Sobriety Test in a Clinical Setting,” appear in Toxicologie Analytique et Clinique and will be presented this week at the annual meeting for the International Association of Forensic Toxicologists in France.

Akansha Anbil, a research assistant in the Center for the Study of Tobacco Products, is primary runner of the ethanol study. She conducts the experiments in a room with a specialized ventilation system that removes the e-cigarette-produced vapor while a participant vapes from an e-cigarette hooked up to a monitoring system.

“We’re using this [e-cigarette device] because we can put a liquid into it that has either 20% ethanol or none. There’s no nicotine in it,” Breland said, demonstrating how the process works. “And while they’re vaping, this hardware and software designed by our colleagues at the American University of Beirut measures exactly how they’re puffing. We can measure the length of their puff, the puff volume. We’re asking everybody to take four-second puffs to try to be similar to how many e-cigarette users puff.”

Breland said the researchers’ findings raise questions about whether the FDA should consider regulating ethanol in e-liquids.

“We’re not trying to answer this question, but should ethanol in e-liquids be something that FDA is thinking about?” she said. “Because they do have the power to regulate components of e-liquid.”

A deeper dive into the impacts of vaping ethanol

The researchers will again have participants complete the standardized field sobriety test and breath test, and they will also collect blood, urine and saliva. They plan to evaluate and analyze six ethanol metabolites in the participants’ fluids.

“When you drink alcohol, there is a very predictable and known rate of absorption, distribution, metabolism and elimination in the body,” Peace said. “There are limited studies of the impact of inhaling ethanol.”

Tests for alcohol metabolites in bodily fluids are commonly used to detect whether someone has consumed alcohol in some broad timeframe. Depending on the nature of the drug test, testing positive for ethanol may mean someone is fired, or a child is taken away, or someone violates probation/parole. The researchers’ new study could inform this process by providing information about whether vaping ethanol can result in a failed drug test.

“There are people testing positive for ethanol metabolites who will proclaim that they do not drink, but they vape,” Peace said.

The researchers’ goal is to develop a unified method for the metabolites, allowing them to address questions such as: Is the person a long-term consumer of ethanol? Or have they consumed ethanol in the past couple hours? And does vaping ethanol change those expectations?