Despite the ever-growing popularity of fitness technology, I’ve never been a fan.

I don’t need tech to tell me when I’ve had a terrible night’s sleep and I move to feel fit in my body and good in my brain not to keep tabs on my calorie count. Besides, exercise for me is partly an escape from work and technology, not a chance to feel more chained to it. So historically, the sole ability of my wearable fitness devices has been to gather dust. 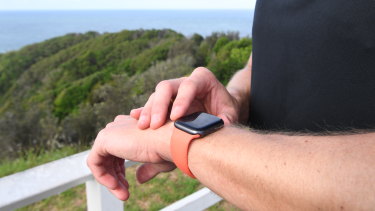 But, the wearable tech industry is expected to hit $54 Billion by 2023, once again it was predicted to be the biggest fitness trend of the year and these gadgets are becoming smarter by the second – they are now capable of tracking far more than just our steps, sleep cycles and energy burned.

The Matildas, world champion canoeist Jess Fox, Olympic athlete Morgan Mitchell, the Australian Women’s cricket team and a growing number of professional surfers now use Apple Watch in their training to track performance and provide instantaneous feedback so they can modify their load.

With more people strapping on and more still curious, as well as the significant development in the devices themselves, it would be remiss of me not to revisit wearable tech.

Since it launched in September last year, the Apple watch series 5 has been hailed “the king” of smartwatches, “simply, the best smartwatch on the market” and “close to perfection”.

The only reason not to buy one, apparently, is if you want multi-day battery life (with so many features draining its battery, the watch needs a daily charge), which is a factor for some regular runners I know choosing alternative brands.

These are big calls, but can it convert a fitness tech sceptic?

In the four years since the Apple Watch first launched, it’s come a long way.

One of its snazziest features, for the fitness inclined, is its water resistance to 50 metres which means, for the first time I wasn’t terrified about the possibility (likelihood) of expensive tech dying because I’ve spilled water on it, taken it in the rain or for an accidental swim.

It took me a while to trust that it really wouldn’t die, but soon I was body surfing with my watch and was able to check for an email (and take a phone call) I was waiting on while playing in a pool with my daughter.

Better yet, a limitation of previous fit tech devices has been their ability to distinguish what form of exercise you are doing; you are either walking or running or, according to your device, being lazy.

Now, you can pick your workout (swimming, cycling, rowing, yoga, walking, running or download an app, designed using the in-built GPS, compass, gyroscope and accelerometer, to track your surf or paddle boarding session) and get customised metrics.

I took it paddleboarding to check my stroke rate (slow) and used the built-in breathe app at the start of a yoga class, aligning my inhalation and exhalation to the expanding and contracting mandala haptic. I used it again yesterday when it pinged me a random reminder to breathe. It was timely as my two-year-old was yelling “mine” as she tugged at me to remove my clothes because she wanted to wear them. I had momentarily stopped breathing as my blood pressure rose, so I started again. Simple yet surprisingly effective.

I used the distance tracker and timer features so I could compete with myself when I worked out and the heart rate monitor to see how my heart responded to an 800-metre incline hike (it indicated I probably needed to do it more often). I liked the ability to leave my phone at home and still listen to music from my watch while I went for a walk, I liked being able to check the weather and I liked being able to call my partner from my watch, for no reason other than it momentarily made me feel all James Bond.

I haven’t needed to employ the safety features such as Emergency SOS and International Emergency Calling and I haven’t yet used the women’s Cycle Tracking – which is a great idea, but less relevant when you are pregnant – or the Noise app, which helpfully informs you, in case you couldn’t hear, when the noise around you is too loud.

The GlobalData report, published late last year, found that the popularity of fitness trackers is waning, “due to their limited capabilities when compared to smartwatches”.

It is hard to compete with such a holistic suite of features, which now has enough depth and breadth that it doesn't matter if you aren't interested in the calorie count or confirmation of a poor night's sleep.

They now provide enough enhancement that they can convert even a hardened tech sceptic like myself. They’re expensive (starting from $649) but, gosh they are smart. Strap-on, I say.