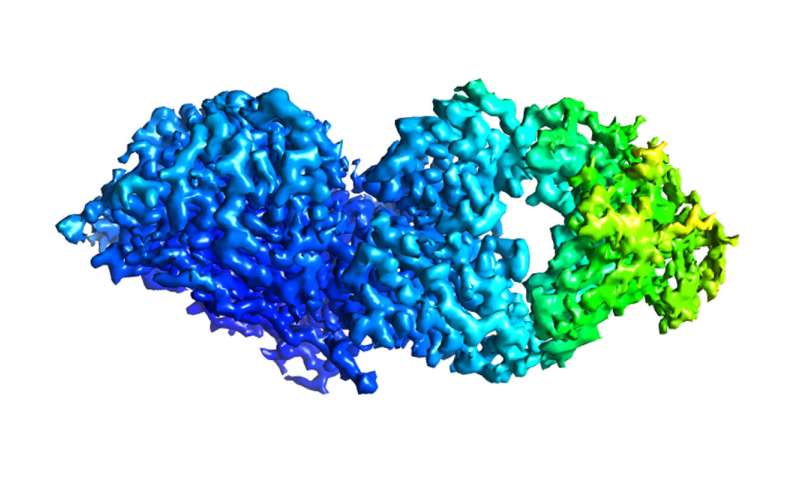 Researchers have identified two antibodies that protect mice against lethal infections of influenza B virus, report scientists at Washington University School of Medicine in St. Louis and Icahn School of Medicine at Mount Sinai. Together with an antibody that targets the other major kind of influenza viruses that infect people—influenza A—these antibodies potentially could form the basis of a broad-spectrum flu drug that could treat almost all flu cases.

The findings are published Sep. 24 in the journal Immunity.

“People forget that before COVID-19 hit last winter, we were already in the midst of a really bad influenza season, especially for children,” said co-senior author Ali Ellebedy, Ph.D., an assistant professor of pathology and immunology at Washington University. “Last year, influenza B viruses attacked much earlier in the season than usual and resulted in significant illness and death among children. We really need better treatments for influenza B. I’m hopeful that these antibodies, which neutralized every strain of influenza B that we tested, could be developed into drugs to treat patients with severe influenza B infection.”

Nearly all influenza viruses that sicken people can be classified into one of two groups: A and B. The most widely used flu medication—Tamiflu—is approved to treat both kinds, but the drug is less effective for influenza B.

Influenza B is the less common of the two and tends to show up late in the flu season, but, for unclear reasons, children are particularly vulnerable to it. During the 2019-20 flu season, 187 children in the U.S. died of influenza, nearly two-thirds from influenza B, making it the worst flu season for children in a decade. In comparison, between 24,000 and 62,000 adults also died of flu during the 2019-20 season, but about a quarter of the adult deaths were due to influenza B.

Last year, Ellebedy’s group identified an antibody called 1G01 that protects mice from the flu by jamming up a critical viral enzyme known as neuraminidase. Both influenza A and influenza B viruses use the enzyme to cut themselves free from cells so they can go on and infect more cells. When neuraminidase is out of order, viral reproduction grinds to a halt. The antibody they found last year inactivated neuraminidases from a wide range of influenza A viruses and some influenza B viruses.

Co-author Philip A. Mudd, MD, Ph.D., an assistant professor of emergency medicine, and the clinical sample collection team in the Washington University Emergency Care and Research Core obtained consent to take blood samples from a patient hospitalized with influenza B virus infection. Ellebedy and colleagues separated out antibody-producing cells from the patient’s blood. The research team included co-senior authors Florian Krammer, Ph.D., a microbiology professor at Icahn School of Medicine at Mount Sinai, and Daved Fremont, Ph.D., a professor of pathology and immunology at Washington University; and co-first authors Anders Madsen, Ph.D., of the University of Bergen in Norway; Ya-Nan Dai, Ph.D., a postdoctoral researcher in Fremont’s lab at Washington University; and Meagan McMahon, Ph.D., a research assistant professor at Mount Sinai.

The researchers then generated antibodies from the cells and analyzed them. They found seven different antibodies that targeted neuraminidase. Two of the antibodies—1G05 and 2E01—potently inhibited all neuraminidases from a diverse set of nine influenza B viruses.

Further, the two antibodies protected mice against a lethal dose of influenza B virus. The researchers infected groups of five mice with influenza B virus, and then treated them three days later with one of the two antibodies or a placebo antibody. The animals became sick and lost weight, but all of the mice treated with 2E01 and four of the five mice treated with 1G05 survived. In comparison, all the mice that received a placebo antibody died.

Further experiments conducted by Dai showed that, like the influenza A antibody previously identified, the two influenza B antibodies neutralized neuraminidase by clogging up the part of the enzyme that cuts the virus loose from cells. Structural analysis of the interactions between the antibodies and the neuraminidases, though, showed that each antibody interfered in a slightly different way, meaning that it would be especially hard for the virus to evolve drug resistance to both of them at once.

“There’s a piece of the antibodies that gets down deep into the enzyme’s active site and prevents it from cutting by interfering at multiple spots,” Fremont said. “It is hard to see how you could mutate this site in such a way that the antibodies no longer interfere but the site still functions. It’s really a no-win situation for the virus, which is good for us.”

Dai added: “There are some strains of influenza virus that have mutations that make them resistant to Tamiflu. We tested two of those resistant strains, and our antibodies inhibited both of them, so we think that these antibodies might be even more broadly protective than Tamiflu.”