The formation of neutrophil extracellular traps (NETs) from neutrophils can be induced by various microorganisms ranging from whole bacteria to fungi and protozoan parasites. In addition to their role in fighting infections, NETs have also emerged as a novel target for cancer therapy. 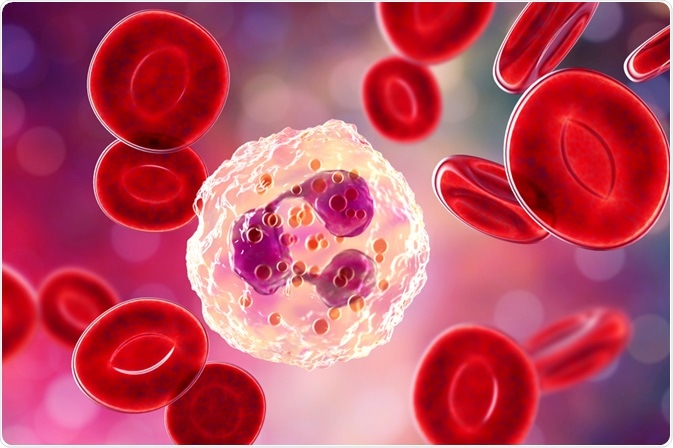 The role of neutrophils

As the most abundant leukocyte, which can also be referred to as white blood cells (WBC), present within the blood of human beings, neutrophils are the first line of defense against invading pathogens.

Neutrophils can employ several different mechanisms in their attack against microbes including phagocytosis, the generation of reactive oxygen species (ROS) and degranulation. Phagocytosis, for example, involves the engulfment and subsequent digestion of pathogens like bacteria or fungi by neutrophils.

Neutrophils also express several groups of receptors including Fc, integrin and G protein-coupled receptors (GPCRs) that are capable of inducing the formation and generation of ROS at the site of infection.

The third mechanism by which neutrophils contribute to the innate immune response is through degranulation, which kills harmful microorganisms through the release of cytotoxic enzymes from the granules of neutrophils into the extracellular space.

What are neutrophil extracellular traps?

Aside from the three actions of neutrophils that were previously described, a group of researchers in 2004 contributed to the identification of a fourth distinct antimicrobial activity of neutrophils.

Moreover, this discovery found that neutrophils, upon the identification of perceived threats within the blood, will release a meshwork of genetic material that is decorated with granule-derived antimicrobial peptides and enzymes such as myeloperoxidase (MPO), cathepsin G and neutrophil elastase.

These released structures, which have been collectively named neutrophil extracellular traps (NETs), primarily consist of deoxyribonucleic acid (DNA) and histones, as well as chromatin fibers within the diameter range of 15 to 17 nanometers (nm).

The release of NETs can also be referred to as NETosis, during which the nuclear and granular membranes are dissolved and all nuclear contents of the neutrophils are decondensed into the cytoplasm.

Neutrophil extracellular traps outside of infections

Aside from their role as a host defense mechanism, NETs have also been found to participate in various non-infectious conditions including systemic lupus erythematosus (SLE), rheumatoid arthritis (RA), cystic fibrosis (CF), diabetes and periodontitis. Within the blood, NETs are involved in coagulation disorders, thrombosis, vasculitis, atherosclerosis and wound healing processes. In addition to these health conditions, the formation of NETs has also been described within the tumor microenvironment and as a promoter of cancer cell metastasis.

The role of NETs in cancer

NETs have been identified in both the blood and tumors in animal tumor models, as well as from patients. In animal mouse models of chronic myelogenous leukemia, breast cancer and lung carcinoma, circulating neutrophils were found to be more prone to release NETs as compared to those of healthy animals. This increased release of NETs in cancer appears to have an important role in promoting tumor metastasis.

Several different mechanisms have been proposed to be responsible for the establishment of metastases by NETs. For example, the DNA component of NETs, which is otherwise known as NET-DNA, can trap circulating tumor cells (CTCs), which can favor metastatic dissemination. A second mechanism by which NETs can potentially enhance metastasis is through increasing local vascular permeability, which would allow cancer cells to easily extravasate into other tissues and organs.

A third mechanism suggests that NET-DNA mediates promotes the invasion of cancer cells by concentrating NET-associated proteases or by protecting these enzymes from exposure to potential inhibitors present within circulating blood. The importance of NET-DNA has been confirmed through several studies that have tested the efficacy of DNase treatments, which successfully dismantled NETs in both in vitro and in vivo tumor models.

Neutrophils and their precursors are sensitive to many different chemotherapy drugs, which can cause patients receiving these treatments to develop neutropenia. Neutropenia, which is defined as an abnormally low number of neutrophils within the blood, can cause individuals to succumb to life-threatening infections. In an effort to prevent this deadly side effect of certain chemotherapy regimens, the American Society of Clinical Oncology recommends prophylactic treatment with neutrophil-stimulating factors such as granulocyte colony-stimulating factor (G-CSF).

Upon discovering the role of NETs in cancer, researchers have found that mild neutropenia may in fact improve survival rates by reducing the levels of neutrophils that might otherwise produce pro-metastatic NETs.

In addition to potentially having a role in prophylactic neutropenia treatment decisions, the detection of NETs in tumor biopsies may also allow clinicians to identify which patients might benefit most from NET-targeted treatments. Therefore, the development of therapies that prevent the formation of NETs is an appealing strategy for the prevention of cancer metastasis, particularly in patients who have been diagnosed with cancers at early stages.

For example, DNase I, which was found to dismantle NETs in vivo, is currently approved by the United States Food and Drug Administration (FDA) for the treatment of CF. While further studies must still be performed to confirm its safety and efficacy in the treatment of certain cancers, the availability of an approved therapy like DNase I might change the prognosis for many people.

After completing her Bachelor of Science in Toxicology with two minors in Spanish and Chemistry in 2016, Benedette continued her studies to complete her Master of Science in Toxicology in May of 2018.During graduate school, Benedette investigated the dermatotoxicity of mechlorethamine and bendamustine, which are two nitrogen mustard alkylating agents that are currently used in anticancer therapy.