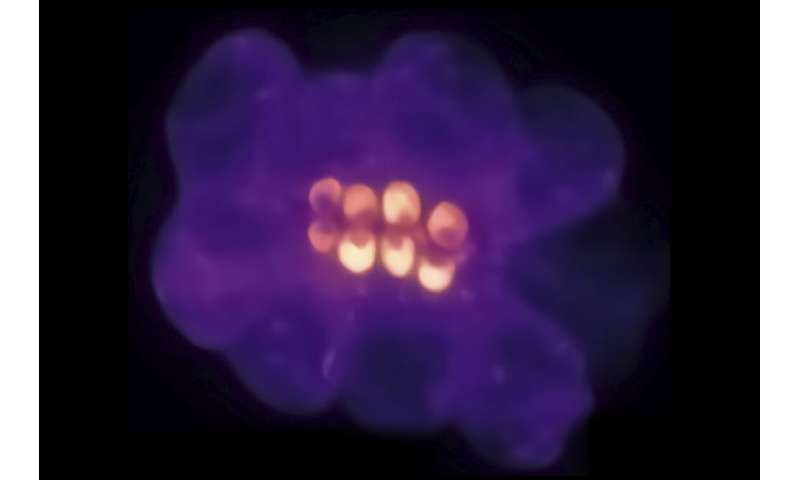 We owe a great deal to the hair cells in our inner ear. Without them, we couldn’t detect sounds or take five steps without tripping. Moreover, these cells happen to be a useful model for biologists who want to understand how tissues self-organize into complex shapes during embryonic development.

The cells’ hair-like filaments come in bundles that sport a slanted shape under the microscope—each bundle protrudes from a single hair cell, its individual hairs increasing in length from one side of the cell to the other. For years, scientists have puzzled over the fact that adjacent hair cells often pair up in a mirror-symmetric pattern so that the sides with the longest hairs always face one another. Which raises the question: How do the cells reliably come together mirror-wise, when theoretically they could end up in two possible orientations?

By watching the process play out inside zebrafish larvae, scientists in Howard Hughes Medical Institute Professor A. James Hudspeth’s group have discovered how the zebrafish’s hair cells arrive at their precise locations. Their findings reveal that two forces—one biochemical, the other mechanical—drive the painstaking choreography.

“The cells have no blueprint for where to go, they just figure it out themselves by talking to each other,” says Anna Erzberger, a postdoctoral fellow in the group and co-author of a recent report in Nature Physics. “And it’s the combination of biochemical and mechanical signaling that ultimately leads to mirror symmetry.”

Adrian Jacobo, a fellow postdoc in the group, filmed the movements of hair cells in zebrafish larvae, which are semi-transparent and whose genes can easily be manipulated. Erzberger and Jacobo focused on the lateral line, an ear-like organ with which the fish detects movements in the water—an essential skill to possess when predators approach.

Within the lateral line, new hair cells emerge when a single precursor cell divides into two. Its seemingly identical daughters then quickly take on different roles: One will be responsible for detecting head-to-tail water movements, the other for sensing currents in the opposite direction.

The scientists wanted to understand how the daughters “decide” which role to assume—who is who, so to speak. They found that the first step of that decision involves a competition in which each cell tries to ramp up its production of a protein called Notch1 while suppressing the opponent’s Notch1 production. The random outcome of this biochemical tug-of-war establishes the cells’ respective identities.

What happens in the next step was more puzzling to the researchers. Whatever its initial position along the lateral line, the cell that won the Notch1 game will eventually end up posterior to the loser. In half of cases the cells start out in the opposite orientation, then diligently dance past one another and rearrange.

This dance, Erzberger and Jacobo found, is mechanical in nature: One cell’s surface tension decreases in the opposite direction relative to that of the other cell. As a result, the cells begin to move in opposite directions—either towards or away from one another—depending on the outcome of the Notch1 game. Ultimately this process ensures that the pairs always end up with the same sides facing each other.