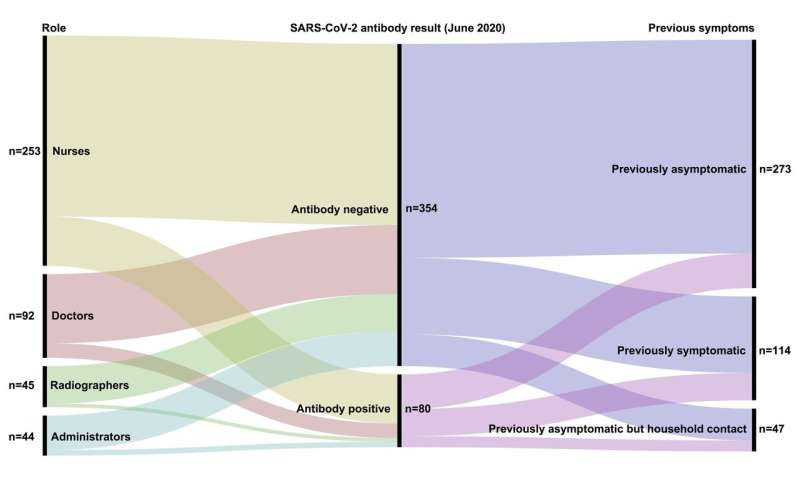 A study of oncology staff carried out immediately after the spring peak of the COVID-19 pandemic in the UK indicates that many had been infected with the coronavirus as they tested positive for COVID-19 antibodies. This included staff who did not show any symptoms.

The study also found that a substantial proportion of those with positive COVID-19 antibodies detected after the first peak had lost their positive antibody status after four weeks.

The research, presented at the NCRI Virtual Showcase, suggests that oncology staff should be routinely tested for signs of current or previous coronavirus infection as rates of COVID-19 begin to rise again.

Dr. David Favara from Cambridge University Hospitals NHS Foundation Trust and the University of Cambridge, UK, led the Covid-19 Serology in Oncology Staff (CSOS) Study. He said: “We began work on this research in April 2020, when the UK was still under COVID-19 lockdown. At that time there was no widely available formal testing programme for NHS staff, symptomatic or asymptomatic, and I was concerned about the impact of transmission of the virus to our oncology patients. At that time, polymerase chain reaction testing was hampered by limited national testing capacity—meaning that only individuals sick enough to be admitted to hospital with severe COVID-19 symptoms were being tested—whilst antibody tests were not offered outside of the experimental setting.

“To the best of our knowledge, we believe this was the first study to specifically investigate exposure to the virus in patient-facing oncology staff who were at work during the peak of the COVID-19 pandemic in the UK between March and June 2020.”

At the start of June, participating staff were given both an antigen test (a nasopharyngeal swab tested with polymerase chain reaction) for signs that the virus was present and two different antibody tests (a blood sample tested with both a laboratory assay and a rapid point-of-care assay) for signs of a previous infection with the virus.

No one tested positive for the antigen, meaning they were probably not infected at the time of testing. However, 18.4% of staff tested in June were positive for antibodies specific to the virus (according to the laboratory assay), suggesting previous infection.

The highest rates were among oncology nurses (21.3%), followed by doctors (17.4%), administrators (13.6%) and radiographers (8.9%). Only some of those who tested positive for the antibodies reported previous symptoms suggestive of COVID-19 (38%).

Dr. Favara said: “The UK has guidance from the UK Royal College of Radiologists on testing patients for the virus antigen prior to their radiotherapy treatments, and broad advice for testing staff.

“Considering our findings, we propose that there should be a focus on routinely testing oncology nursing staff for both the virus antigen and antibodies until an effective vaccine becomes available. Testing for signs of previous infection alongside testing for current infection on a large scale would also help us better understand changes in immunity over time.”

Dr. Favara says he and his colleagues will continue collecting samples at intervals until a vaccine becomes widely available.