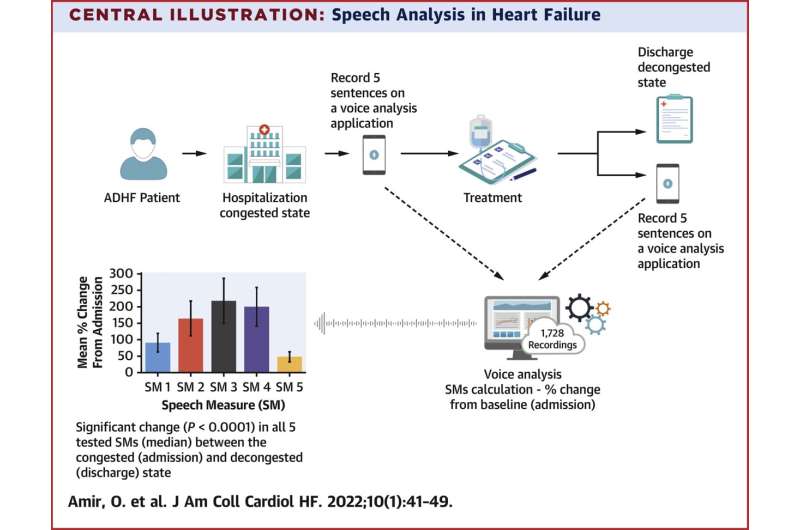 A voice analysis app used by heart failure patients at home recognizes fluid in the lungs three weeks before an unplanned hospitalization or escalation in outpatient drug treatment. The late breaking research was presented on May 21 at Heart Failure 2022, a scientific congress of the European Society of Cardiology (ESC).

“The current standard of care just isn’t good enough for keeping patients with heart failure well and out of the hospital,” said study author Professor William Abraham of The Ohio State University, Columbus, U.S. “The system tested in this study was able to predict 80% of worsening heart failure in advance, compared to a 10–20% success rate for daily weight monitoring shown in previous studies. In the future, speech analysis, together with other clinical information, could be used to modify treatments before a patient’s condition deteriorates and thereby avoid hospital admission.”

In patients with heart failure, the heart does not pump blood around the body as well as it should. Fluid is not eliminated properly by the kidneys and this excess fluid builds up in the lungs or legs. Lung congestion is a common cause of hospitalization, and can be life-threatening. Currently, lung congestion is monitored by asking patients to weigh themselves every day and report any substantial gain. Patients are also requested to report worsening symptoms such as shortness of breath, needing to elevate the head at night to breath comfortably and sleep, and swelling in the feet or ankles.

The speech analysis app used in the current study was previously shown to detect fluid in the lungs of patients hospitalized with acute heart failure. This study investigated its ability to predict worsening heart failure in patients living at home.

The study included 180 patients with heart failure taking guideline recommended medications. At the beginning of the study, as a baseline measurement, participants recorded five sentences on a standard smartphone using the voice analysis app. During the study period, every morning before breakfast patients recorded the same five sentences using the app. The app compared each day’s recordings with the baseline versions and alerted research staff when it detected lung congestion. Professor Abraham explained: “The system sets a baseline for each individual patient during a period of stability. It then detects changes in speech over time that indicate fluid in the lungs.”

Professor Abraham noted that a “true alert” would continue to be issued daily until the heart failure event occurred. He said: “In this study, the alerts were not acted upon by clinicians since the aim was to determine the diagnostic performance of the tool. In real life, notifications would be sent to the patient’s physician until it was responded to. Here we followed patients longitudinally for worsening heart failure events and then looked to see if there was an alert prior to that event—i.e., a ‘true alert.’ If there was no alert then the system failed to predict the event. Alerts not followed by a worsening heart failure event were ‘false alerts.'”

During the study, patients provided recordings for an average of 512 days. A total of 49 heart failure events occurred in 37 patients, of which 39 (80%) were correctly predicted by the app and 10 (20%) were missed. True alerts were issued a median of 21 days before worsening symptoms. Each patient received a false alert every 4.8 months on average, resulting in an average of 2.5 erroneous warnings each year.