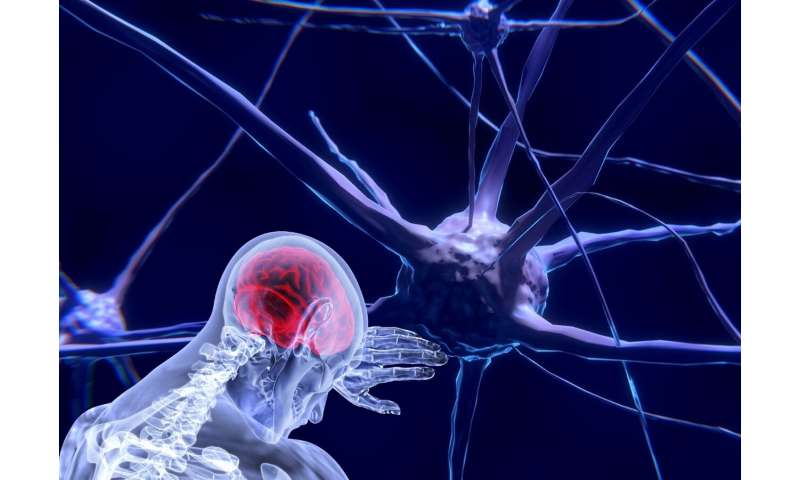 The dorsal periacqueductal gray (dPAG) is involved in controlling emotional behavior by coordinating defensive behavior. It is linked to pathologies such as post-traumatic disorder (PTSD). However, its role in the formation and retrieval of negative memories remains unknown.

Researchers from the Shenzhen Institutes of Advanced Technology (SIAT) of the Chinese Academy of Sciences have investigated the role and connectivity of the glutamatergic (VGluT2+) and GABAergic (GAD2+) subpopulations of neurons in the dPAG of mice, in the context of aversive conditioning and retrieval.

By recording activity using in vivo and free-moving calcium imaging, the researchers found that VGluT2+ and GAD2+ subpopulations similarly responded to fear unconditioned and conditioned stimulations.

But 24 hours after conditioning, only the VGluT2+ subpopulation persisted in responding to the conditioned stimulation during retrieval test.

This intrigued SIAT team, since it indicated functional differences between glutamatergic and GABAergic populations during the integration of aversive memories.

To better understand these divergences, they mapped the structures projecting respectively to dPAGVGluT2+ and dPAGGAD2+ neurons by using Rabies Virus, a Cre-dependent monosynaptic retrograde tracing technique.

The results showed that both glutamatergic and GABAergic dPAG subpopulations received upstream projections from the same structures, but with different strength of inputs. In particular, compared with dPAGVGluT2+, the dPAGGAD2+ population received many more Ventromedial Hypothalamus inputs, a structure known to be involved in sustained fear emotional states.

These specific patterns of connectivities could explain part of the functional results obtained, and may especially indicate that glutamatergic subpopulation is a main contributor of aversive memories in dPAG.

“Investigating how structures belonging to emotion circuitry, such as the PAG, are involved in aversive memory formation is an important step to understand long-lasting emotional states. Our study could ultimately lead to find potential treatments for pathologies such as PTSD,” said Dr. Quentin Montardy, the paper’s first co-author.