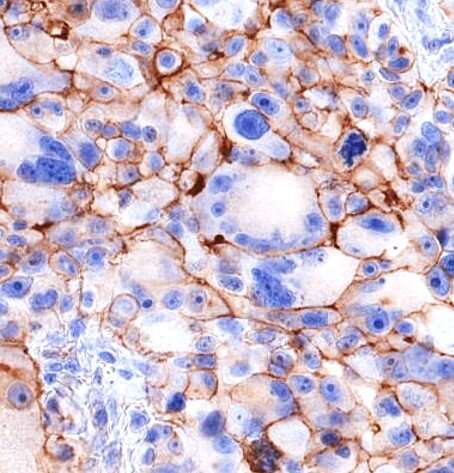 QIMR Berghofer research has found a new reason why some melanoma patients do not respond well to immunotherapy—a discovery that could lead to better-tailored treatments for the potentially deadly cancer.

“Our study has highlighted the central importance of CD155 to the effectiveness of immunotherapy for patients with metastatic melanoma—something that hasn’t been shown before in humans,” Professor Smyth said.

“The tumor appears to be using the CD155 molecule to escape being hunted down by immune cells, called T-cells, and to also resist being killed off by immunotherapy.”

The CD155 protein is expressed by nearly all cancer cells and less so by normal cells, including some immune cells. It is part of a family of adhesive proteins that are important in cell to cell interaction.

“Modern immunotherapy treatments have been quite successful in helping unleash our immune systems to kill melanoma tumor cells, but in some people the tumor cells remain disguised and treatments don’t work, often leading to death,” Professor Smyth said.

“We found high levels of CD155 in melanoma cells seem to help tumors evade detection by the T-cells and trick them into leaving the tumor alone. The tumor CD155 appears to wound the T-cells during the interaction, reducing their capacity to subsequently recognize and kill tumor cells. Reducing tumor CD155 in people with metastatic melanoma may be a way to improve the effectiveness of immunotherapy for them and save the lives of many more people.”

The researchers used new imaging technology to examine pre-treatment tumor samples collected from patients in Brisbane, Sydney and Italy and correlated the levels of CD155 with the patients’ survival outcomes.

“We found patients with higher levels of the protein had worse health outcomes and didn’t respond well to immunotherapies,” Dr. Ahern said.

The study findings have been published in the journal Clinical Cancer Research.

The study builds on Professor Smyth’s 2018 research that showed CD155 in both tumor and immune cells was important for tumor growth and spread.