Researchers in the United States who tracked the evolution of severe acute respiratory syndrome coronavirus 2 (SARS-CoV-2) in an immunocompromised patient found that convalescent plasma therapy was associated with the emergence of viral variants that were less susceptible to neutralizing antibodies.

The SARS-CoV-2 virus is the agent responsible for the coronavirus 2019 (COVID-19) pandemic that continues to pose a significant threat to global public health and the worldwide economy.

The team’s analysis of genome sequences generated at 23-time points over 101 days showed little change in the overall structure of the viral population during the first 57 days.

However, following convalescent plasma therapy (CT), large shifts in the virus population occurred on day 66, with the emergence of a dominant viral strain bearing a double mutation in the N-terminal domain (NTD) of the viral spike protein.

The spike protein is the surface structure SARS-CoV-2 uses to bind to and infect host cells.

As the antibodies introduced through CT diminished over time, so did the virus with the double mutation. However, during a final course of CT, the double-mutant bearing strain returned.

Writing in the journal Nature, the team says: “These data reveal strong selection on SARS-CoV-2 during convalescent plasma therapy associated with the emergence of viral variants with evidence of reduced susceptibility to neutralizing antibodies.”

The study was conducted by researchers from the University of London, University of Cambridge, University of Oxford and various other institutions, including The CITIID-NIHR BioResource COVID-19 Collaboration and The COVID-19 Genomics UK (COG-UK) Consortium.

Steven Kemp and colleagues say characterization of viral evolution in response to different selection pressures in the immunocompromised host is necessary, both to improve patient management and to benefit public health. 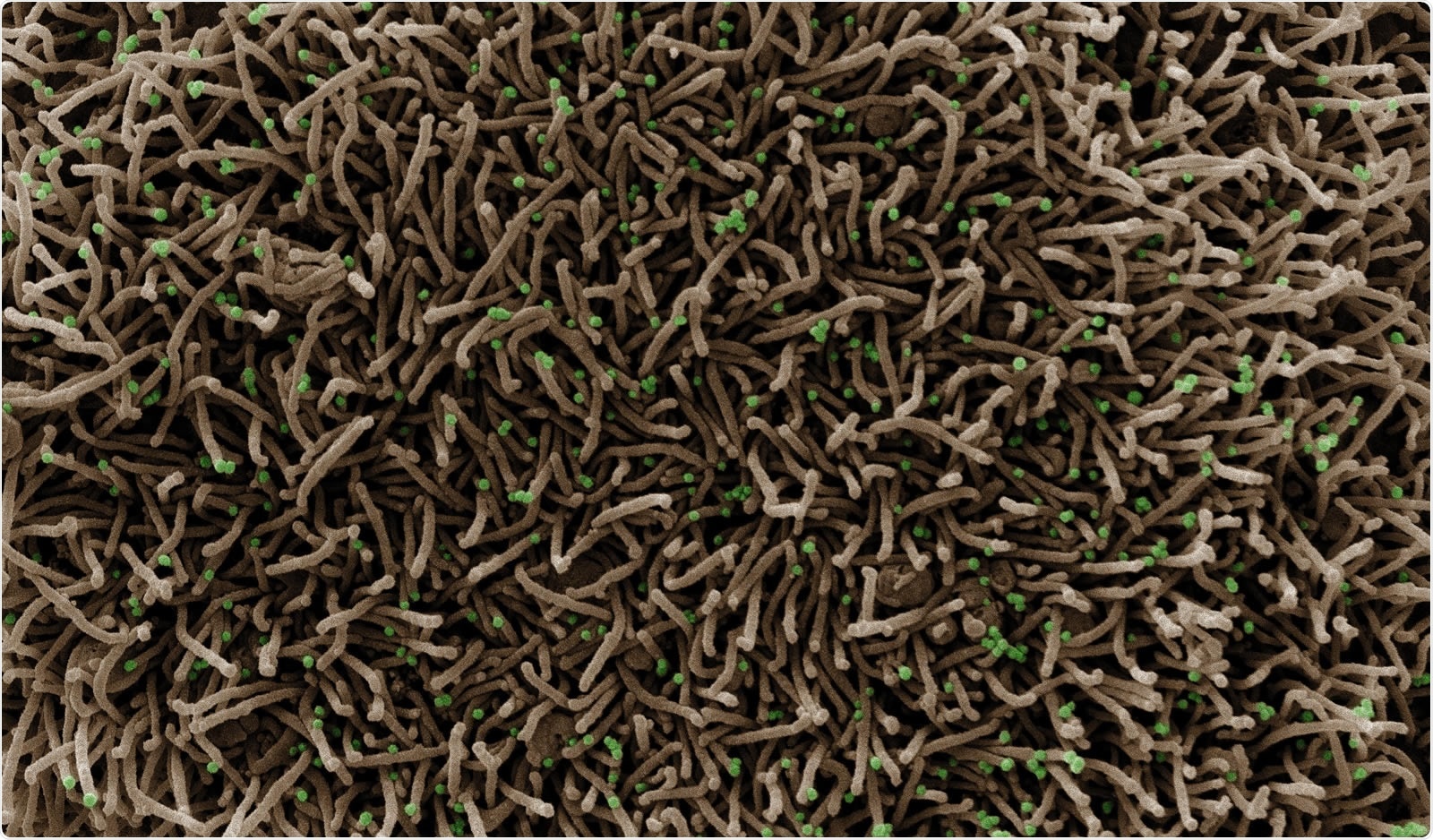 A CCL-81 cell (tan) infected with SARS-CoV-2 virus particles, which are the small spherical structures (green). The string-like protrusions extending from the cell are cell projections or pseudopodium, whose primary purposes are cell mobility and ingestion of nutrients. Image captured at the NIAID Integrated Research Facility (IRF) in Fort Detrick, Maryland. Credit: NIAID

More about the patient

The immunocompromised patient was a man in his 70s who had been diagnosed with marginal B cell lymphoma in 2012 and had received various forms of chemotherapy.

“It is likely that both chemotherapy and underlying lymphoma contributed to B and T cell combined immunodeficiency,” says the team.

The man was admitted to a tertiary hospital in the summer of 2020 and had tested positive for SARS-CoV-2 at a local hospital 35 days previously.

The original infecting viral strain was assigned to SARS-CoV-2 lineage 20B, which contains the D614G spike protein variant.

Little change was observed in the structure of the overall viral population following two courses of remdesivir administered during the first 57 days.

However, following the administration of CT, large, dynamic shifts in the viral population occurred between days 66 and 82. A dominant viral strain emerged bearing the D796H mutation in subunit 2 of the spike protein and the ΔH69/ΔV70 deletion in the NTD of subunit 1.

On days 86 and 89, the deletion-mutation pair observed on day 82 had fallen to frequencies of 10% or less and viruses were instead characterized by mutations Y200H and T240I in the spike protein.

“The repeated increase in frequency of the viral population with CP therapy strongly supports the hypothesis that the deletion/mutation combination conferred selective advantage,” says Kemp and colleagues.

Next, the team used lentiviral pseudotyping to generate wild type, ΔH69/ΔV70 + D796H and single mutant spike proteins and measured their susceptibility to the neutralization activity of CP.

The double mutant showed modestly decreased sensitivity to convalescent plasma, which appeared to be mainly driven by D796H.

What did the authors conclude?

The researchers say that the patterns in variant frequencies observed here point to competition between virus populations carrying different mutations.

“Viruses with the D796H/ ΔH69/ΔV70 deletion/mutation pair rise to high frequency during CP therapy and are then outcompeted by another population in the absence of CP therapy,” says Kemp and colleagues. “Understanding of viral dynamics and characterization of viral evolution in response to different selection pressures in the immunocompromised host is necessary not only for improved patient management but also for public health benefit.”

The authors out that the clinical efficacy of CT as a treatment for severe COVID-19 has not yet been demonstrated and that any use of the therapy remains experimental.

“We suggest that it should be reserved for use within clinical trials, with rigorous monitoring of clinical and virological parameters,” concludes the team.

Sally has a Bachelor's Degree in Biomedical Sciences (B.Sc.). She is a specialist in reviewing and summarising the latest findings across all areas of medicine covered in major, high-impact, world-leading international medical journals, international press conferences and bulletins from governmental agencies and regulatory bodies. At News-Medical, Sally generates daily news features, life science articles and interview coverage.