Researchers in the United States have identified specific immune correlates that might be key to ensuring that vaccination against severe acute respiratory syndrome coronavirus 2 (SARS-CoV-2) protects against not only disease but also viral transmission and emerging variants.

The SARS-CoV-2 virus is the agent responsible for the coronavirus disease (COVID-19) pandemic that has claimed the lives of more than 2.32 million people globally.

In a unique vaccine study designed to assess the importance of antigen-dose and boosting, the team carefully interrogated key correlates of immunity against upper and lower respiratory tract infection in rhesus macaques.

However, animals that received a second dose exhibited complete protection against infection in the upper and lower respiratory tract. This improved protection following a second immunization was associated with a dramatic maturation of antibody effector functions that correlated with highly functional neutralization.

Antibodies are made up of a variable fragment called (Fab) that mediates antigen binding and a constant fragment (Fc) that mediates effector functions through interaction with Fc-receptors expressed on immune cells.

“These data demonstrate the critical importance of a coordinated Fab- and Fc mediated antibody response for full protection against SARS-CoV-2 infection, that may also function against emerging variants,” writes Galit Alter from the Ragon Institute of MGH, MIT, and Harvard and colleagues.

A pre-print version of the research paper is available on the bioRxiv* server while the article undergoes peer review. 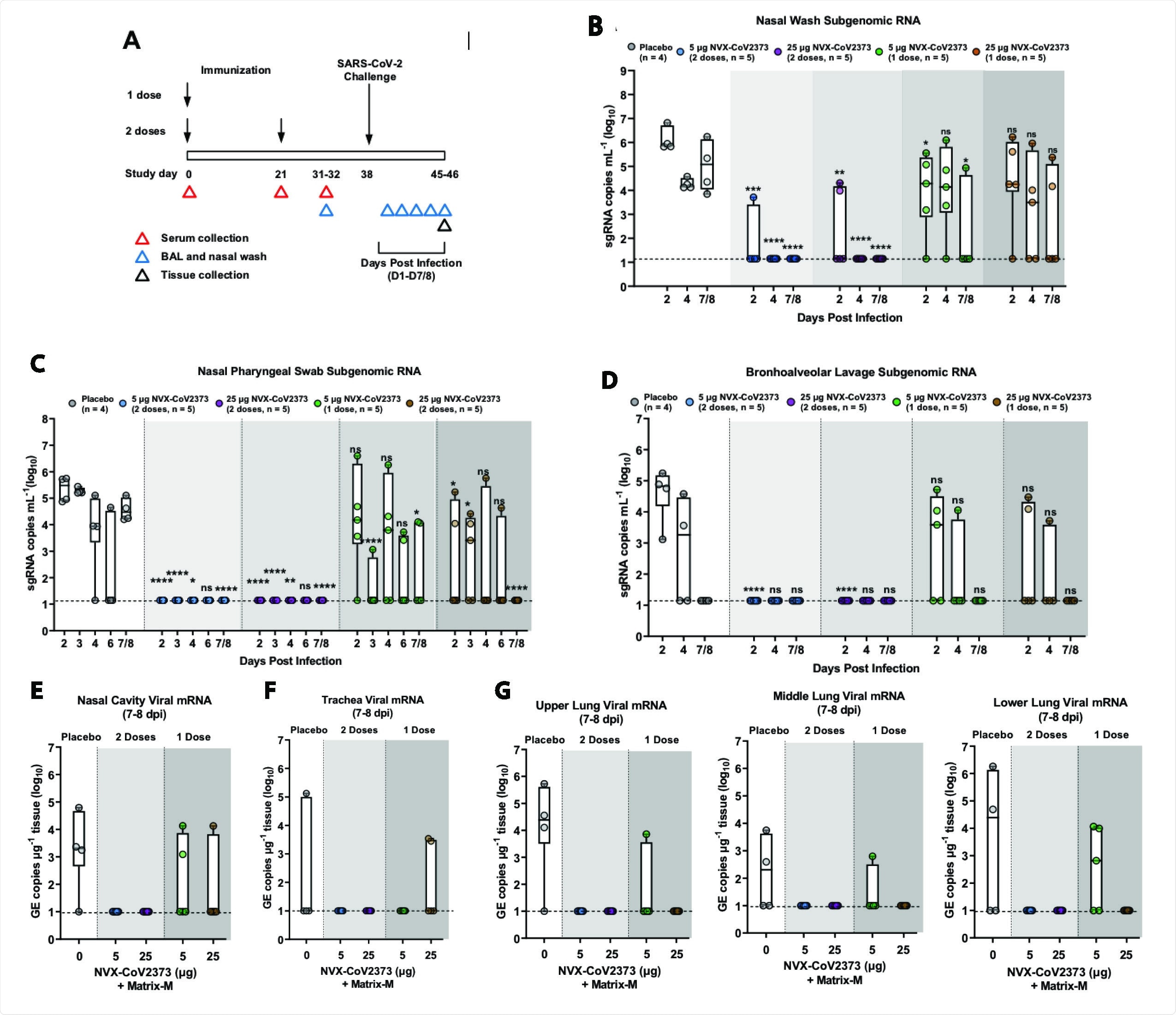 Subgenomic RNA and viral RNA in upper and lower respiratory tract of NVX908 CoV2373 immunized rhesus macaques (A) Groups of adult rhesus macaques (n= 4-5/group) were immunized with a single priming dose (study day 0) or a prime/boost regimen (study day 0 and 21) of 5 μg or 25 μg NVX-CoV2373 with 50 μg Matrix-M (0.5mL; IM). A separate group (n=4) received formulation buffer (placebo). Immunized and placebo animals were transferred to an ABSL-3 containment facility (study day 31/32) and acclimated for 7 days prior to challenge with a total of 1.05 × 106 pfu SARS-CoV-2 (USA-WA1/2020 isolate) in 500 μL divided between the intranasal (IN) and intra915 tracheal (IT) routes. Animals were monitored daily for up to 7-8 days post infection (1-8 dpi). Serum sample collection days are indicated by the red triangles. Bronchoalveolar lavage (BAL) sample collection days are indicated by the blue triangles. Necropsy and tissue collection is indicated by the black triangle. Quantitative RT-PCR was used to measure the replicating subgenomic (sg) envelope (E) RNA in nasal washes, nasal pharyngeal swabs, and BAL samples collected for up to 7-8 dpi. (B) Nasal pharyngeal washes. (C) Nasal swabs. (D) BAL aspirates. (E) SARS-CoV-2 gRNA in the Nasal cavity virus load. (F) Trachea virus load. (G) Upper, middle and lower lobes of the lungs of immunized and placebo treated animals. In the bar-and923 whisker plots, the median is indicated by a horizontal line, the top and bottom of the box indicated the interquartile range, and the whiskers indicate the minimum and maximum values. Individual animal values are indicated by the colored symbols. Dashed horizontal line indicates the limit of detection. Genomic equivalent copies (GE copies mL-1 926 ). Significant differences between the placebo group and the immunized groups was determined by Student’s t-test (two tailed, unpaired). Not significant (ns), *p ≤ 0.05, **p ≤ 0.01, ***p ≤ 0.001, ****p ≤ 0.0001.

Recently approved vaccines against SARS-CoV-2 infection have already been effective at preventing severe disease and inducing cellular and humoral immune responses. However, whether these vaccines protect against transmission as well as disease is not yet clear.

Emerging Phase 3 data have suggested the vaccines induce protection against disease as early as 10 days following the first vaccination, while levels of neutralizing antibodies are low or undetectable.

“Whether these responses are associated with complete sterilizing immunity remains unclear,” says Alter and colleagues.

Studies of DNA and adenoviral vector SARS-CoV-2 vaccination indicate a potential role for added antibody effector functions, together with neutralization, as key correlates of immunity against the virus.

However, whether these responses evolve following the prime or the boost, provide differential protection across the upper and lower respiratory tract, and provide protection against variants also remains unclear, says the team.

What did the researchers do?

The team conducted in-depth profiling of humoral correlates of protection in rhesus macaques immunized with one or two 5µg or 25µg doses of the NVX-CoV2373 vaccine. In the two-dose regimen, animals received the second vaccine 21 days after the first one. Control animals received one or two doses of placebo (formulation buffer).

What did they find?

Animals that received a single dose of the vaccine were only partially protected against replicating virus in the upper respiratory tract, irrespective of whether they were given the low (5μg) or high (25μg) antigen dose.

By contrast, animals that received two doses were completely protected against replicating virus in both the upper and lower respiratory tract, irrespective of antigen dose.

“These data suggest that a single dose may prevent disease, but that two doses may be essential to block further transmission,” says the team.

The enhanced protection following the second vaccine was associated with a dramatic maturation of the Fc effector profile that correlated with neutralization activity.

Highly functional and neutralizing antibody responses conferred the most robust protection against infection in the upper and lower respiratory tract.

“Combined differences in antibody effector functions and neutralization were strongly associated with distinct levels of protection in the upper and lower respiratory tract, pointing to the presence of combined, but distinct, compartment-specific neutralization and Fc-mechanisms as key determinants of protective immunity against infection,” writes the team.

Importantly, a second dose of the NVX-CoV2373 vaccine-elicited antibodies that targeted emerging SARS-CoV-2 variants, pointing to a critical role for Fab and Fc in driving maximal protection against the virus.

What are the implications of the study?

The researchers say the findings support the value of boosting, which will undoubtedly be critical to achieving complete protection against infection and transmission, and to driving durability.

“Collectively, these data provide key insights into compartment-specific immune correlates that may be critical for protection against virus shedding that could help meet an urgent public health need and accelerate the establishment of herd immunity,” concludes the team.

Sally has a Bachelor's Degree in Biomedical Sciences (B.Sc.). She is a specialist in reviewing and summarising the latest findings across all areas of medicine covered in major, high-impact, world-leading international medical journals, international press conferences and bulletins from governmental agencies and regulatory bodies. At News-Medical, Sally generates daily news features, life science articles and interview coverage.