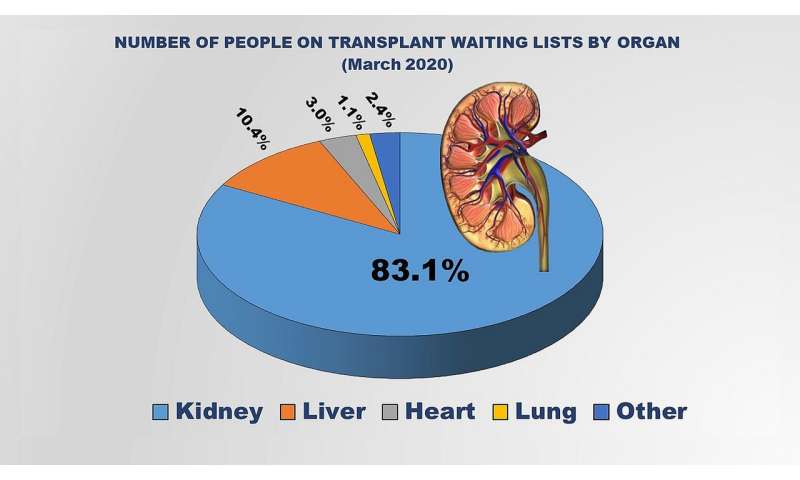 Earlier this year, a study led by researchers at Johns Hopkins Medicine provided strong evidence that hundreds of deceased donor kidneys with acute kidney injury (AKI)—traditionally discarded as unsuitable for transplantation—could be safely and successfully used. Now, a follow-up investigation by the same team, in collaboration with researchers at 13 other medical institutions in the United States, has shown that two proteins found in deceased donor urine can be measured to define which donor organs—including those with AKI—are the best candidates for saving the lives of patients with kidney failure.

The team’s findings were reported online July 27, 2020, by the journal Transplantation.

Currently, the national discard or rejection rate for all potential donor kidneys is approximately 18%, but for AKI kidneys, it jumps to 30%. According to statistics from the U.S. Department of Health and Human Services, nearly 100,000 Americans with kidney failure, also known as end-stage renal disease, are awaiting donor organs. Unfortunately, as reported by the U.S. Centers for Disease Control and Prevention, nearly 9,000 of these patients drop off the waiting list each year, succumbing to death or deteriorating in health so that transplantation is no longer possible.

Making matters worse, says the National Institute of Diabetes and Digestive and Kidney Diseases, the need for donor kidneys is rising at 8% per year. However, their availability has not grown to match.

To better identify which deceased donor kidneys have a higher probability for successful transplantation and long-term survival as grafted organs, the new study looked to two proteins—both easily obtained from the urine of donors at the time of organ harvesting—that the researchers felt could be used as clinical biomarkers.

The two proteins, uromodulin and osteopontin, had been shown in previous studies to play a protective role in kidney health and proper functioning, helping to repair cells damaged by AKI and stimulating immune responses against foreign invaders. Therefore, the research team believed that their presence in deceased donors might indicate which kidneys were most likely to recover from injuries or infections.

“We determined that if the ratio of the amounts of the two proteins, as precisely measured in samples of a deceased donor’s urine, was less than or equal to three, then that person’s kidneys were the most suitable for transplantation and had a higher chance for staying healthy and functioning longer after the surgery,” says Chirag Parikh, M.D., Ph.D., director of the Division of Nephrology at the Johns Hopkins University School of Medicine and senior author of the study.

There were 1,298 donors and 2,430 recipients participating in the study. A total of 322 deceased donors (25%) had signs of AKI. The recipients were followed for a median time of four years after surgery to document any graft failures or deaths.

The researchers say that additional studies are needed to validate the use of the uromodulin-to-osteopontin ratio as a clinical tool for timely and accurate evaluation of kidneys for transplantation.

“We estimate that using this strategy, once confirmed as reliable, we can annually reduce the number of kidneys discarded and add a few thousand suitable-for-transplant organs to the pool,” Parikh says.