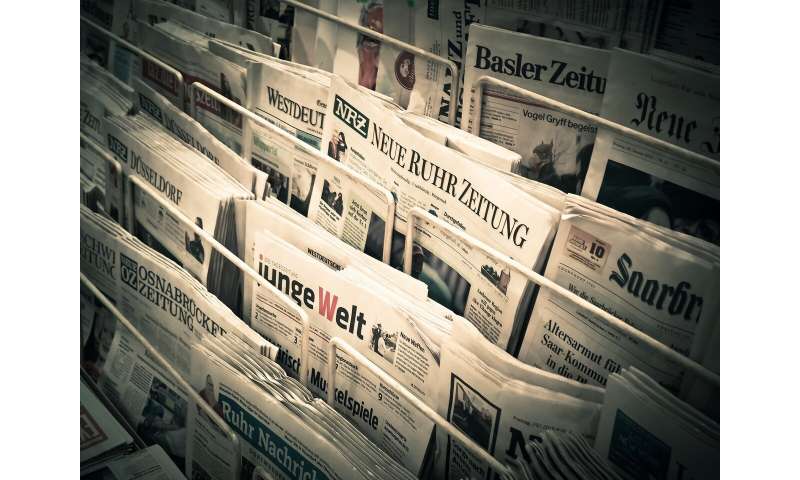 While freely available, trustworthy news is vital—in particular when conveying personal risk and government mandated guidelines—the Flinders University research warns of less favorable issues such as inciting panic or causing stigmatization in the community by laying blame on certain groups or organizations.

“How the media portray health crises is an important influence not only on public behavior but also on the long-term repercussions for health,” according to the new paper in Frontiers in Public Health.

The study, which focuses on national Australian newspaper coverage from early 2020 and after the WHO declaration of “pandemic” on 11 March 2020, notes a range of themes such as moral evaluations of pandemic-related issues and behaviors—ranging from its origins in Wuhan province in China, disruption to business and community to opportunistic price gouging and cruise ship evacuations.

“Our study found the frequency and tone of COVID-19 articles published in The Australian and Sydney Morning Herald escalated in line with the rise in health, societal and economic disruptions,” says postgraduate Mr Thomas.

“By and large, the broadsheets were fairly objective during the early stages and didn’t seem to explicitly apportion blame to any one group or politician, although this was before handling of the Ruby Princess cruise ship in NSW, the ‘second wave’ in Victoria, criticism of Premier Daniel Andrews, and Morrison Government’s inquiry into the WHO and China’s pandemic approach.”

With epidemics such as COVID-19 likely to become more frequent and possibly more harmful due to globalization and increase in human-animal contact, he says the media’s role should be scrutinized in the latest pandemic conditions.

Flinders University Professor Paul Ward says the press coverage studied had generally taken seriously the public’s need to know, and as gatekeepers of public information had sought out experts including government, scientists and public health experts.

“They’re widely seen and trusted by the community and media gets to decide what is and isn’t highlighted,” says Professor Ward.

“In their arsenal of public health measures they can mediate behavior to point fingers and create a sense that it’s a foreign thing, or a politician or government’s fault, and this can be motivated from a need to keep the story going. But this can be harmful to rational, sensible debate which keeps a sound perspective on the situation and the need for a united front to overcome this pandemic.”