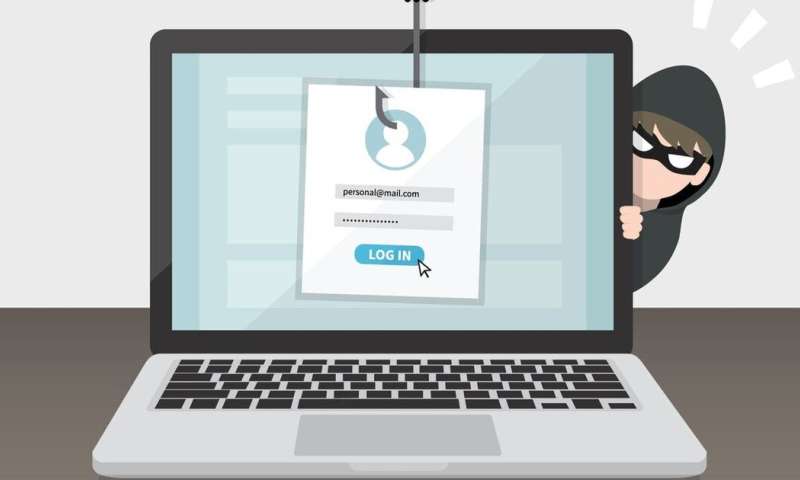 COVID-19 is being described as the first major pandemic of the social media age. In troubling times, social media helps distribute vital knowledge to the masses. Unfortunately, this comes with myriad misinformation, much of which is spread through social media bots.

We witnessed this in the 2016 United States presidential elections, with arson rumors in the bushfire crisis, and we’re seeing it again in relation to the coronavirus pandemic.

The exact scale of misinformation is difficult to measure. But its global presence can be felt through snapshots of Twitter bot involvement in COVID-19-related hashtag activity.

Bot Sentinel is a website that uses machine learning to identify potential Twitter bots, using a score and rating. According to the site, on March 26 bot accounts were responsible for 828 counts of #coronavirus, 544 counts of #COVID19 and 255 counts of #Coronavirus hashtags within 24 hours. 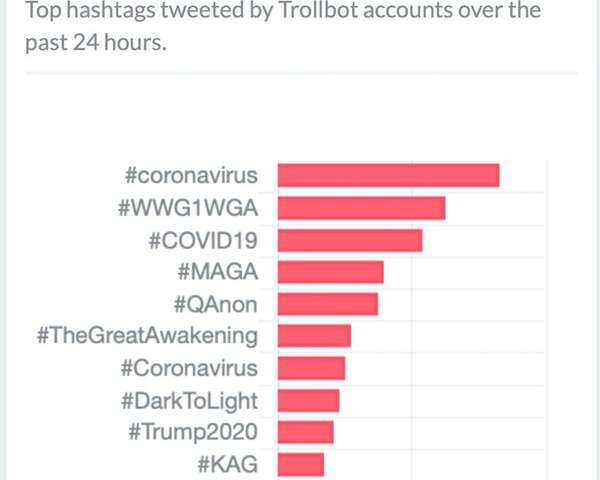 These hashtags respectively took the 1st, 3rd and 7th positions of all top-trolled Twitter hashtags.

It’s important to note the actual number of coronavirus-related bot tweets are likely much higher, as Bot Sentinel only recognizes hashtag terms (such as #coronavirus), and wouldn’t pick up on “coronavirus”, “COVID19” or “Coronavirus”.

How are bots created?

Bots are usually managed by automated programs called bot “campaigns”, and these are controlled by human users. The actual process of creating such a campaign is relatively simple. There are several websites that teach people how to do this for “marketing” purposes. In the underground hacker economy on the dark web, such services are available for hire.

While it’s difficult to attribute bots to the humans controlling them, the purpose of bot campaigns is obvious: create social disorder by spreading misinformation. This can increase public anxiety, frustration and anger against authorities in certain situations.

A 2019 report published by researchers from the Oxford Internet Institute revealed a worrying trend in organized “social media manipulation by governments and political parties”. They reported: “Evidence of organized social media manipulation campaigns which have taken place in 70 countries, up from 48 countries in 2018 and 28 countries in 2017. In each country, there is at least one political party or government agency using social media to shape public attitudes domestically.” 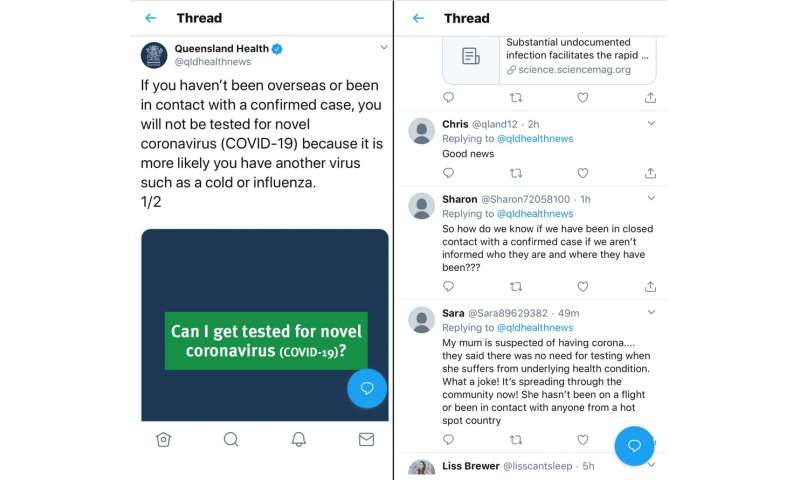 The modus operandi of bots

Typically, in the context of COVID-19 messages, bots would spread misinformation through two main techniques.

The first involves content creation, wherein bots start new posts with pictures that validate or mirror existing worldwide trends. Examples include pictures of shopping baskets filled with food, or hoarders emptying supermarket shelves. This generates anxiety and confirms what people are reading from other sources.

The second technique involves content augmentation. In this, bots latch onto official government feeds and news sites to sow discord. They retweet alarming tweets or add false comments and information in a bid to stoke fear and anger among users. It’s common to see bots talking about a “frustrating event”, or some social injustice faced by their “loved ones”.

The example below shows a Twitter post from Queensland Health’s official twitter page, followed by comments from accounts named “Sharon” and “Sara” which I have identified as bot accounts. Many real users reading Sara’s post would undoubtedly feel a sense of injustice on behalf of her “mum”.

While we can’t be 100% certain these are bot accounts, many factors point to this very likely being the case. Our ability to accurately identify bots will get better as machine learning algorithms in programs such as Bot Sentinel improve. 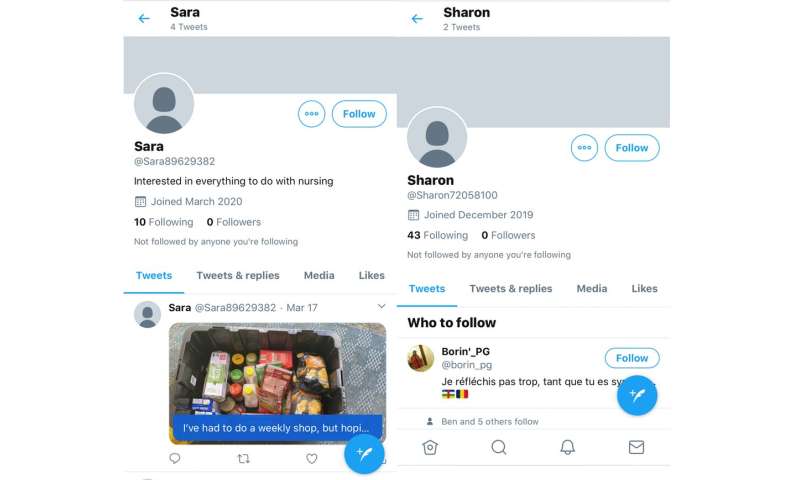 How to spot a bot

To learn the characteristics of a bot, let’s take a closer look Sharon’s and Sara’s accounts.

Both profiles lack human uniqueness, and display some telltale signs they may be bots:

My investigation into Sharon revealed the bot had attempted to exacerbate anger on a news article about the federal government’s coronavirus response. 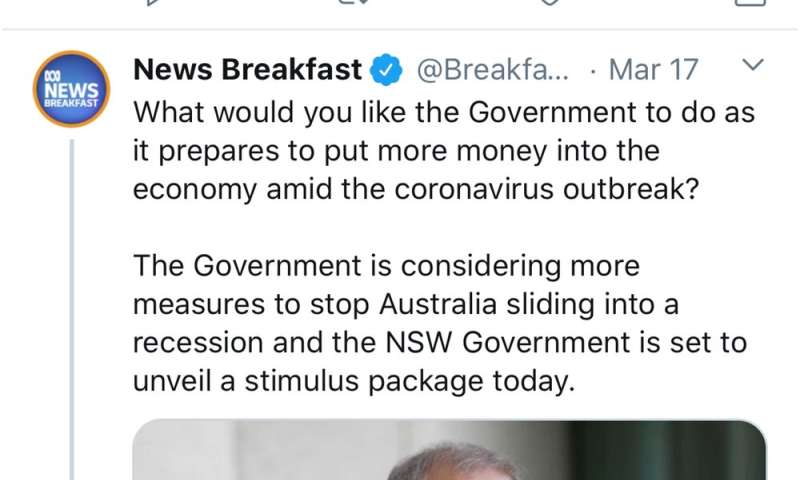 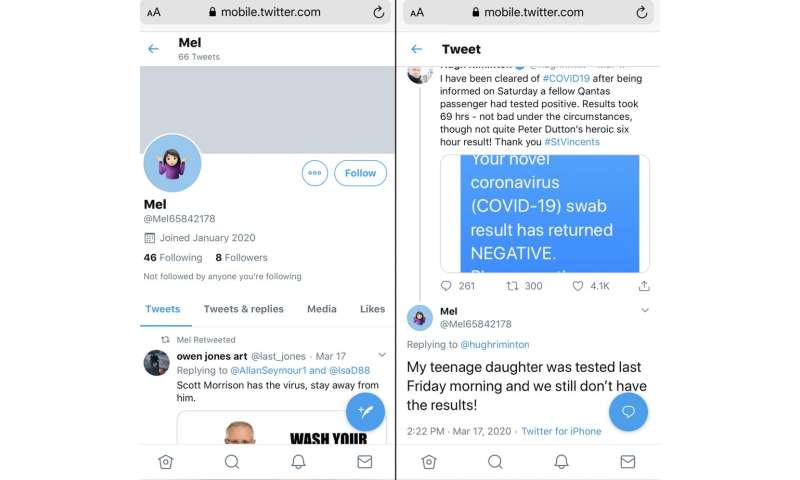 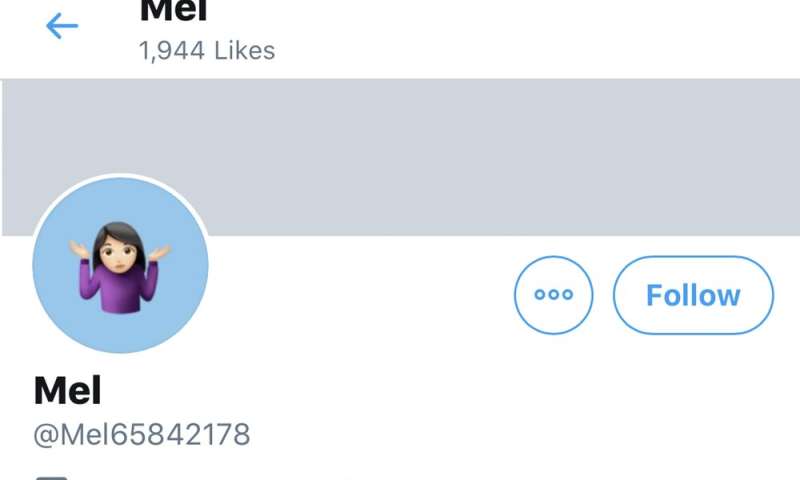 It seems Sharon was trying to stoke the flames of public anger by calling out “bad decisions”.

Looking through Sharon’s tweets, I discovered Sharon’s friend “Mel”, another bot with its own programmed agenda.

What was concerning was that a human user was engaging with Mel.

You can help tackle misinformation

Currently, it’s simply too hard to attribute the true source of bot-driven misinformation campaigns. This can only be achieved with the full cooperation of social media companies.

The motives of a bot campaign can range from creating mischief to exercising geopolitical control. And some researchers still can’t agree on what exactly constitutes a “bot”.

But one thing is for sure: Australia needs to develop legislation and mechanisms to detect and stop these automated culprits. Organisations running legitimate social media campaigns should dedicate time to using a bot detection tool to weed out and report fake accounts.