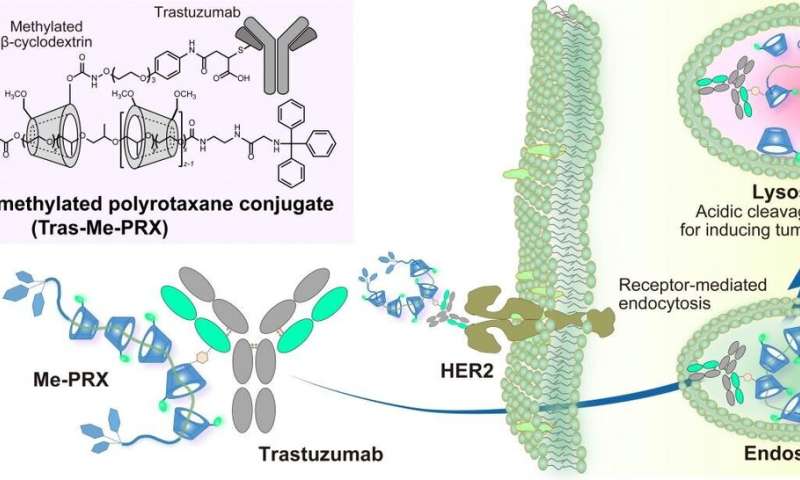 Many people across the globe are working hard to get the better of cancer; however cancer is always working too. Cancer cells can become resistant to the methods that have been adopted to kill them, so identifying drugs that act in different ways is part of the push to outsmart this ubiquitous disease. TMDU researchers have engineered a material that can identify cancer cells and mount an attack that they are not yet ready for. Their findings are published in the Journal of Materials Chemistry B.

Most of the anti-tumor drugs available work by inducing a cell death process known as apoptosis, and unfortunately cancer cells are developing resistance to drugs that work by this mechanism. However, other modes of cell death are known and focusing on alternative mechanisms is one way for researchers to stay a step ahead.

The TMDU researchers previously reported a supermolecule (Me-PRX) that acts as a drug by inducing autophagic cell death. The structure of Me-PRX can be thought of as lots of rings threaded onto a piece of string. These rings are kept on the string by adding stoppers to each end. However, the stoppers are specifically designed so that the rings are released at the acidic pH inside the cell. The release of the rings inside the cell causes endoplasmic reticulum stress, which leads to autophagic cell death.

Me-PRX has significant potential, but until now lacked a way of targeting the specific cancer cells requiring treatment. It was also too small to stay in the bloodstream for extended periods. In their recent work, the researchers have attached their supramolecular drug to the Trastuzumab antibody, which is able to identify the HER2 gene that is overexpressed by many tumor cells. 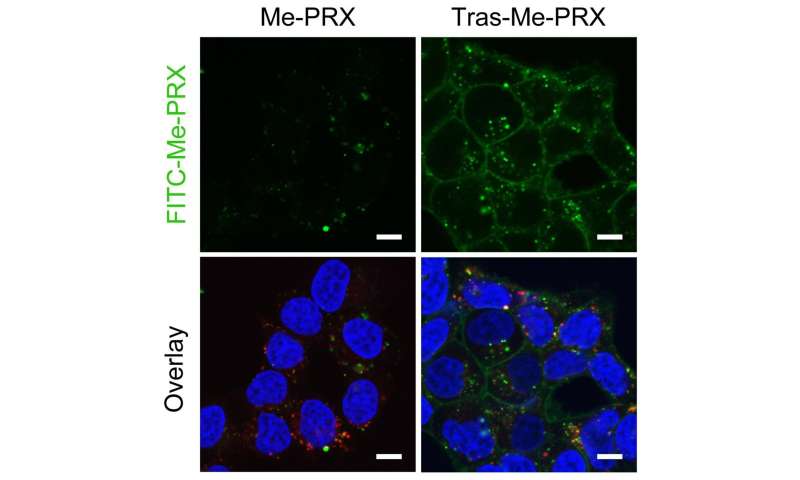 The size increase brought about by forming this antibody-drug conjugate (ADC) also stops it being filtered out by the kidneys, giving it more time to act. And being larger helps the ADC to be passively taken up by tumors.

“We compared our Trastuzumab-modified Me-PRX (Tras-Me-PRX) with Me-PRX alone and Me-PRX modified with an antibody unable to target HER2-overexpressing cancer cells,” study lead author Atsushi Tamura explains. “And we found that the binding of Trastuzumab to HER2 played an important role in getting Me-PRX into cells.”

The researchers also found that lower concentrations of Tras-Me-PRX were needed to have an impact on the number of live healthy cells than those required for Me-PRX alone. This shows that the delivery of Tras-Me-PRX led to enhanced autophagic cell death.