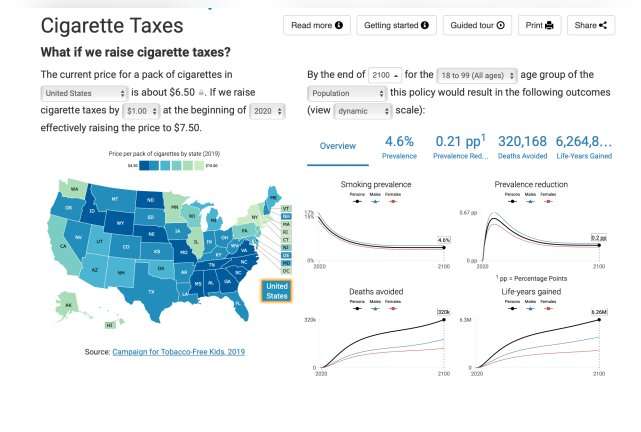 New estimates from a web-based tool that tracks tobacco use created by the Yale School of Public Health show that the recent federal law raising the age of legal tobacco purchase to 21 could save over 100,000 lives over the rest of this century.

The same tool further breaks down the lives saved within each of the 50 states and Washington, D.C. For example, the federal law will save 8,900 lives in the state of New York, 13,800 in Florida and more than 6,800 in North Carolina by 2100.

The TCP tool was designed to facilitate tobacco control decision-making at the local, state and national levels, providing the latest data in an easy-to-understand format so that people can understand the potential health benefits of different policies when weighing various options. Legislators and other decision-makers often have to make choices for public health with little knowledge about potential long-term health impacts.

“We want to address this gap,” said Tam “Our team makes projections about the future under different tobacco policy scenarios using simulation modeling. We want to make it easier for everyone to understand and explore the health benefits of tobacco control policies being considered. Simulation models are rarely accessible to people outside of the research community, so we developed a tool that is designed to be interactive, user-friendly, and informed by the latest data.”

The policy simulation tool is unique in that it takes into account the existing state policy environment when predicting the effects of new policies. For example, before the federal Tobacco 21 law went into effect, 41% of the U.S. population was already living somewhere with a local or state Tobacco 21 law, which reduces the impact of the federal law itself. The researchers accounted for this underlying policy context when modeling the impact of new policies.

The tool works similarly with cigarette taxes—the public health impact of a $1 increase in the price of cigarettes really depends on the state context.

“You’re going to get the biggest bang for your buck in states where the price of cigarettes is low, compared to states that already have high tobacco taxes,” Meza said. “Our tool gives the user results that are specific to the policy and place they are interested in.”

The TCP tool has been updated to reflect the most recent tobacco use trends and the latest data across states. The researchers gathered state-by-state information from the Campaign for Tobacco Free Kids, the American for Nonsmokers’ Rights and the Centers for Disease Control and Prevention. They combined this with research about policies’ effectiveness to simulate more than 2,200 different policy scenarios and their impact on population health outcomes.