A new Disease-a-Month study summarizes the traditional and modern uses of kratom, as well as its pharmacology, benefits, and adverse health impacts. 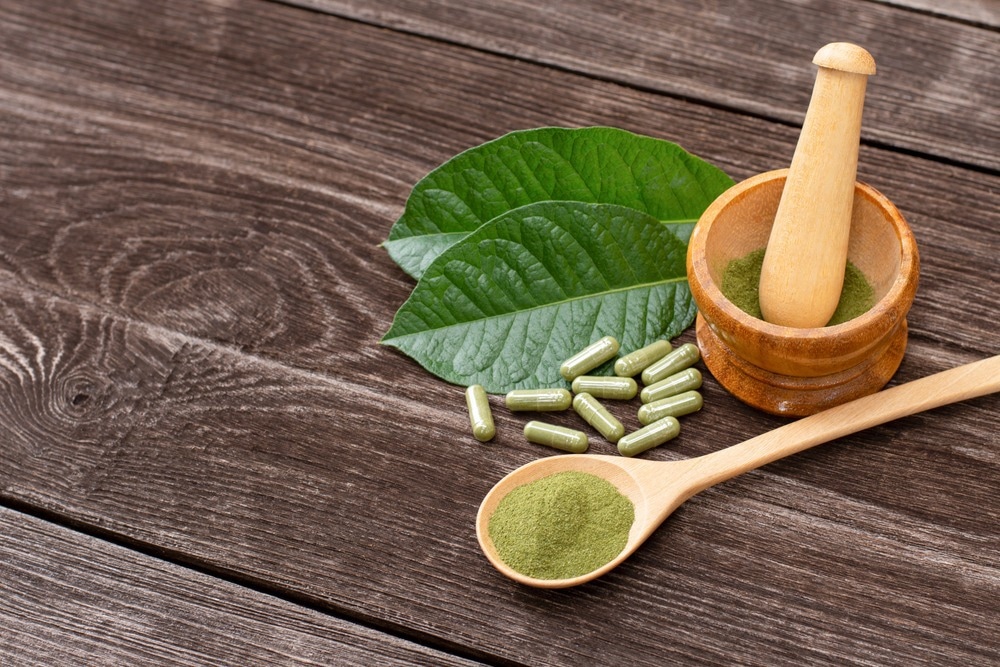 Kratom was first scientifically described in the 19th century by the Dutch botanist Pieter Willem Korthals. Kratom, whose scientific name is Mitragyna speciosa, is a tree that is mainly found in South Asia, particularly Malaysia, Thailand, and Indonesia.

When Kratom reaches maturity, it has a maximum height of 25 centimeters (cm) and forms a characteristic ovate-acuminate leaf shape. The leaves of this tree consist of pinnate venation that can be of white, green, or red color.

Kratom belongs to the coffee family and shares similar dose-dependent stimulant properties; however, it does not contain theophylline or caffeine.

Kratom has gained importance over the last two decades due to its opioid-like effects, as well as dose-dependent stimulant properties that are mediated by the indole alkaloids present in its leaves. 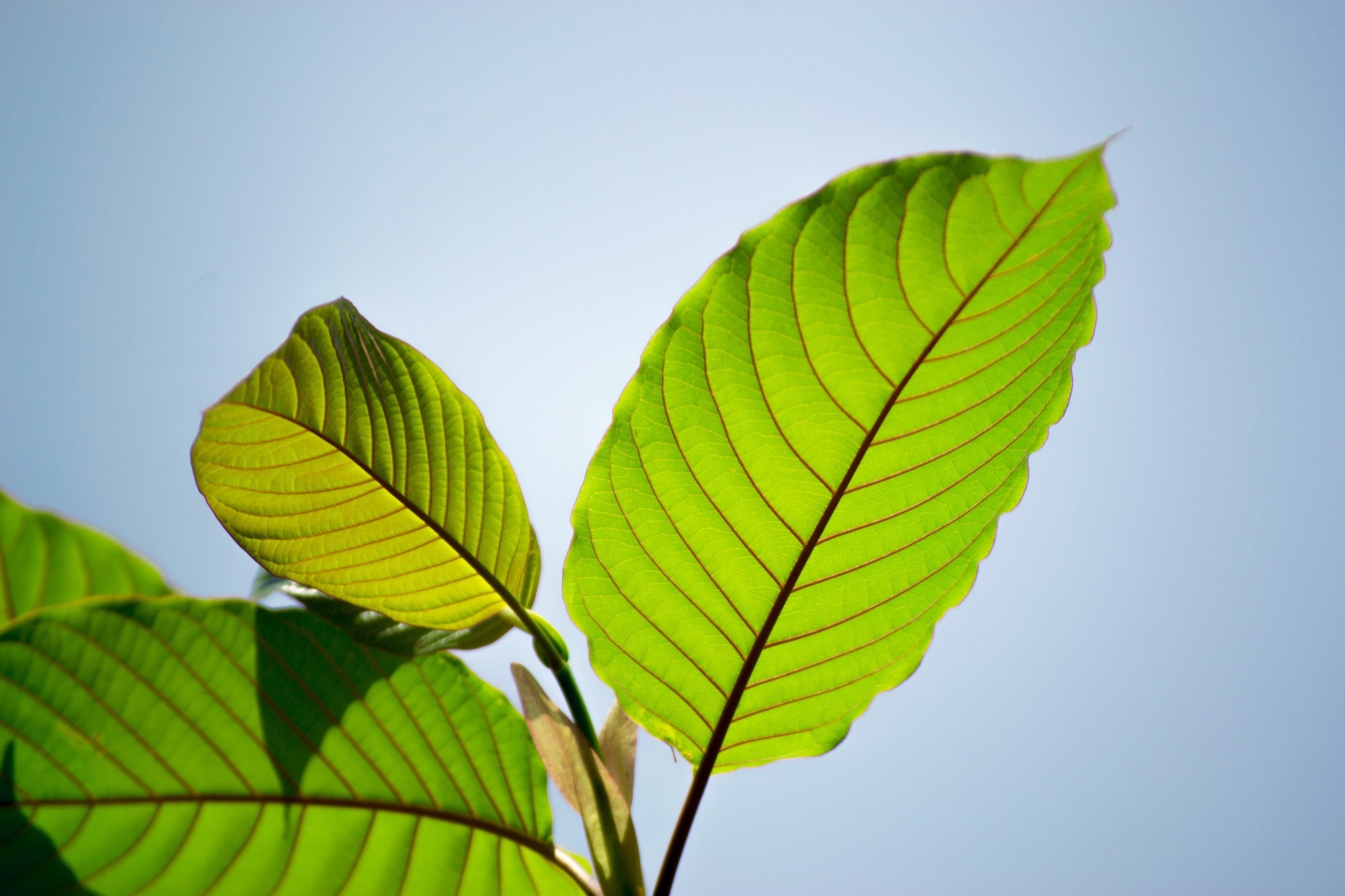 Kratom has historically been used as a source of medicine, as well as for recreational purposes, for centuries in many Southeast Asian countries. Typically, kratom is given a common name that is specific to the local region where it is grown.

Only the fresh leaves of the kratom plant are chewed to obtain its stimulant effects and reduce fatigue from hard labor by fishermen, farmers, or laborers. In addition, kratom has been used to treat symptoms of substance use disorders, particularly opium withdrawal. Rarely, the dried leaves are used either to prepare a water decoction or for smoking.

Kratom use is now banned in Malaysia and Indonesia, while Thailand allows the legal growth and consumption of the plant. Nevertheless, Indonesia is involved in the export of kratom as a cash crop to the United States and several other countries.

In Europe and the U.S., kratom is sold along with cannabidiol, cannabis, and kava products, all of which have medicinal and recreational uses. Kratom is primarily sold as a loose powder, tablet, or capsule in Western countries.

Traditionally, kratom has been used for anti-diarrheal, analgesic, antipyretic, anti-diabetic, and muscle relaxant purposes. Kratom has also been used in a homemade concoction known as “4 × 100” over the past decade among young adults in Thailand. This plant has also been mixed with diphenhydramine- or codeine-containing cough syrups and heated with soft drinks containing caffeine for oral ingestion.

Some of the adverse effects of kratom use include dehydration, weight loss, hyperpigmentation, and constipation. Higher doses of kratom can lead to lethargy and tiredness, along with a greater risk of developing dependence and tolerance. Rare events of overdose deaths from 4 × 100 concoctions have also been reported in Thailand.

Mitragynine has also been found to bind α-adrenergic receptors, in which it has the highest affinity for the α1A receptor and lowest affinity for the α2B receptor. This compound can also bind to serotonin receptors 5-HT 1A and 5-HT 2B with low affinity, while two of its enantiomers can bind to these receptors with high affinities.

Mitragynine, which comprises 66% of kratom and is thus a primary active agent of this plant, can be absorbed rapidly by the small intestine, thus causing impact within minutes. This compound has a 23-hour terminal half-life and its concentration decreases in approximately four hours.

Mitragynine is generally protein-bound in the serum and metabolized in the liver into at least seven different phase I metabolites. Aside from mitragynine, 25 other alkaloids have been found in kratom at lower concentrations.

Previous in vitro studies using rats indicated mitragynine to be the main alkaloid compound in kratom extract that could reduce electroencephalography (EEG) activity in the parietal and frontal cortexes. However, a recent study highlighted that kratom alkaloids, rather than mitragynine alone, were essential for the analgesic effects and pain processing of kratom.

The clinical trials for kratom are currently restricted in many countries, as this agent is not classified as a drug, food, or supplement. The U.S. Food and Drug Administration (FDA), for example, has reported kratom and its alkaloids to be opioids. The FDA has banned the import of kratom and warned the public against its consumption.

Several self-reported surveys of kratom have indicated that its users are most commonly males, non-Hispanic white, middle-aged, full-time, or self-employed with middle income. Many of these individuals use kratom for the treatment of a mental disorder or chronic pain.

Adverse effects of kratom on health

Small doses of kratom rarely have any impact on health, while larger doses can adversely impact health. Agitation, seizures, vomiting, tachycardia, or sedative/opioid-like effects occur during an acute overdose. Seizures have been reported in 9% of cases to U.S. Poison Centers and 16-18% of cases to a Poison Center in Thailand.

Kratom use is also associated with monomorphic or polymorphic ventricular dysrhythmias. Polymorphic ventricular tachycardia might be due to the impact of kratom on the QTc interval. Additionally, several deaths due to pulmonary congestion resulting from respiratory depression have been reported following the ingestion of high concentrations of mitragynine.

Several cases of kratom-related liver injury have also been reported. Most patients recover within a year, while severe cases require administration of ursodeoxycholic acid, N-acetylcysteine, or glucocorticoids to reduce inflammation and restore metabolic capacity.

Kratom use disorder (KUD) has also been reported by heavy users of kratom and can lead to withdrawal symptoms similar to that of opioid withdrawal. Kratom Associated Neonatal Abstinence Syndrome (KANAS) has been reported in neonates born to mothers who heavily used kratom during pregnancy. The alkaloids in kratom have also been reported to interfere with the metabolism of several drugs and medications.

Currently, the adverse effects due to kratom use are treated by symptomatic management and discontinuation. Naloxone is reported to reverse respiratory depression, while liver toxicity resolves after discontinuation of kratom use. Anti-dysrhythmic agents might be useful to treat dysrhythmias; however, there is no clinical evidence to support this hypothesis.

Benefits of kratom use

Kratom is most commonly used for the self-treatment of chronic and/or acute pain, anxiety, or depression, and also to boost energy and focus. This plant is also used to treat withdrawal symptoms from a prescription drug or illicit drug dependency. However, further clinical studies need to be conducted to determine the benefits of kratom and its alkaloids.

Kratom has been historically used throughout Southeast Asia and has recently gained popularity in both Europe and the U.S. for its stimulant and opioid-like effects. This plant has complex pharmacology and can cause harmful effects when overused.

Some of the adverse effects of kratom are dose-dependent and primarily occur in people with an underlying substance use disorder. This plant has certain beneficial uses that include the treatment of pain, anxiety, depression, or withdrawal symptoms of certain drugs. Further research is needed before counseling patients regarding the therapeutic use of kratom.