I’m 45 years old and originally from Australia, but I currently live in Brooklyn, New York, with my boyfriend. I work as a singer-songwriter, illustrator, and entrepreneur. I also have my own business called Natchie, where I sell whimsical illustrations of my lyrics, animals, and more.

When I’m not writing or sketching, you can find me working out. I consider myself a pretty health-conscious individual; I don’t smoke, I don’t drink, and I’m vegan. I exercise five days a week, alternating between hour-long vinyasa yoga and CrossFit sessions. I’ve even hiked the Himalayan mountains. I’m definitely considered “the healthy one” among my friend group.

My lifestyle didn’t protect me from the novel coronavirus like I thought it would, though. I spent 22 days battling COVID-19 after going to a large dinner party in March—an event I wish I’d never attended, in retrospect.

What follows is a diary of the last month. I hope everyone will learn from my experience with novel coronavirus—and take the precautions that I wish I’d started putting into place earlier.

March 10: I attended a benefit dinner where I now suspect I got the virus. 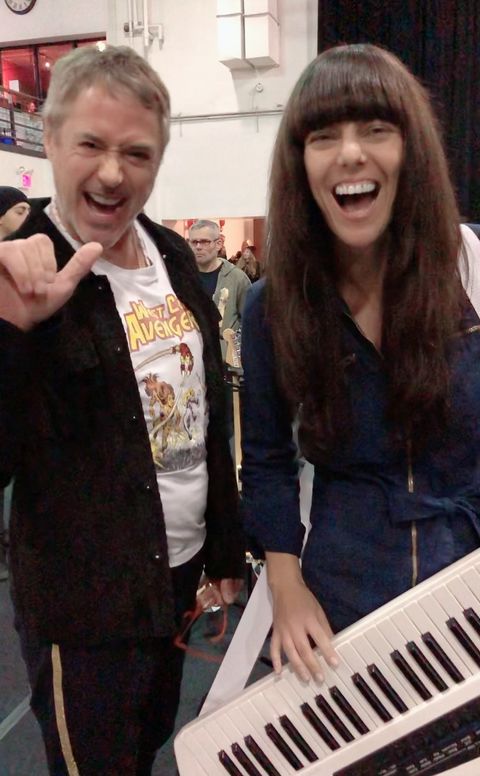 Nadia rehearsing with Robert Downey Jr. in December for the benefit concert held by Sting and Trudie.
Nadia Ackerman

About 100 people had been invited to a thank you dinner by the Australian consulate. (Earlier this year, I put on a benefit concert with three other friends to raise money in response to the Australian bushfires and donated it to the Red Cross.)

Now, I realize that this dinner was probably the worst possible environment to be in. It took place in small restaurant, where we had cocktails in a crowded area, then moved upstairs to dinner where everything was served as shared plates and passed around the table. I thought twice about going to the dinner, but at the time I figured I was overreacting because no one was really taking the virus that seriously yet. So I went—but I now regret putting myself in that situation.

Thursday morning, I had a really weird coughing attack. It was strange. You know when you cough so hard, it feels like you’re going to vomit? It was that kind of cough—hard and aggressive. It lasted about 10 minutes, and it was enough to make my eyes water. At first, I chalked it up to spring allergies.

By 5 p.m., I was hit with a fever of 100 degrees, scratchy throat, and sore chest. It felt like a horse had kicked me in the ribs—or like someone was punching me or had punched me in the lungs.

My boyfriend had to take care of me, and I stayed on the couch, alternating between burying myself in blankets and throwing them off of me to deal with my fever. I lay there all evening, never making it upstairs to my bedroom.

March 13: I woke up the next morning feeling just as bad, if not worse—so I went to urgent care.

At this point, everyone was talking about COVID-19, and I just knew I had it. This wasn’t a flu. It felt different. I hadn’t felt this sick in 22 years, since I first moved to New York and caught pneumonia.

I didn’t call ahead or put on a mask and gloves. The only thing I could think was, “I feel sick. I’m going in.” When I walked into the urgent care clinic, things seemed calm. There were only three people in the waiting room at the time, and no one behind the front desk was wearing masks or gloves. But when I approached the desk and told them that I thought I had novel coronavirus, they put them on straight away and gave me a mask, too. 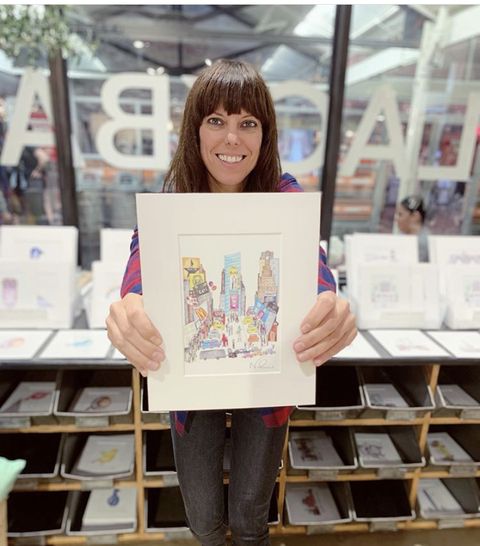 Nadia and her illustrations in store.
Nadia Ackerman

I sat in the waiting room for about 40 minutes before I was let into one of the exam rooms. When the doctor came in to see me, he wasn’t wearing anything protective. I was shocked because I was sitting there thinking, “I know I’ve got it.”

He checked my temperature, and it was 100 degrees. He told me that 103 was the benchmark they were using to decide whether or not someone should be tested for COVID-19. I had been in contact with someone else who was waiting for her test results, but when I told the doctor that, he still said that he couldn’t give me a test; he encouraged to come back if my friend’s results ended up being positive. “You’ve probably got it, but I can’t test you,” he said.

Honestly, I was really disappointed. I felt like maybe I was overreacting, but at the same time, I knew I was really sick and that I likely had the virus. It was really confusing. I said to the doctor, “Oh, so there are probably tons of people walking around with this right now, infected and positive, but who haven’t been tested?” And he said, “Absolutely.”

March 13: After urgent care sent me home without a test, my symptoms evolved.

The cough lingered, but my fever went away—which at first made me think I was getting better. Then came the extreme exhaustion, the kind where you can’t lift your head off the pillow.

Next came the headaches. I’m a migraine sufferer, so I can really handle headaches. But I would gladly take a migraine over the headaches I was getting. They were relentless. And nothing worked. Not Tylenol. Nothing touched it. It was almost like my brain was boiling or like someone was like squeezing it inside my head. It was unbearable.

I also began experiencing nausea and loss of appetite. And on March 16, my boyfriend became sick. He went down the same way that I did: severe fever; freezing cold, then extremely hot. His fever was up to 102.5. So I got up and rallied. I thought, “I need to take care of him.” I tried to just not think about how sick I was. 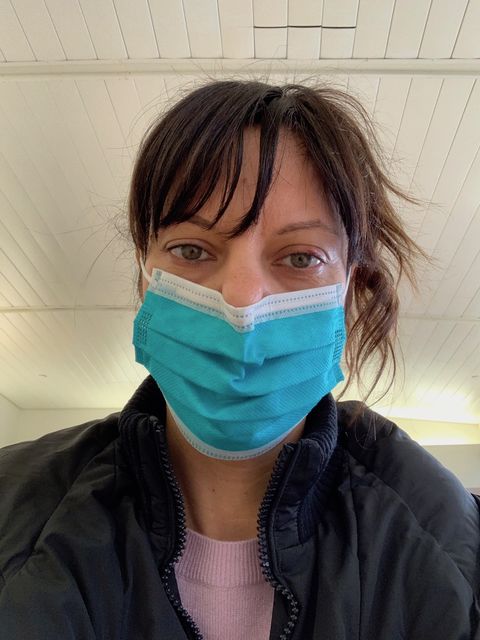 Nadia after dropping John off at the emergency room.
Nadia Ackerman

March 18-21: I took my boyfriend to the ER, where he was admitted immediately. Meanwhile, I was at home alone, vomiting and too weak to even shower.

On March 18, I took John to the hospital, where he was admitted and tested positive for COVID-19. After I dropped him off, I went home alone, got in bed, and stayed there for four days. I became sicker and sicker and sicker. My biggest problem at this point, though, was that I had no appetite. Then I lost my sense of taste and smell. And it wasn’t like a cold, when you lose taste and smell and you’re stuffy. I had no trace of either of those senses. You could have served me rotten eggs, and I wouldn’t have known the difference.

Then came the diarrhea. At this point, I actually felt like I was going to die. It felt like there was nothing left of me. I couldn’t eat. I couldn’t drink. I couldn’t walk. I couldn’t shower. I couldn’t even lift my head off of the pillow. I was too weak. My boyfriend was still in the hospital, so no one was there to help me.

March 22: I went to the hospital and was finally tested for COVID-19.

I was texting my boyfriend about my symptoms, and he mentioned them to his doctor, who suggested I call an ambulance right away.

When the ambulance arrived at my house, the EMTs would not come inside. They knocked on my door and waited for me to answer. They looked scared and were hesitant to even come near me. They walked me to the ambulance and strapped me into a seat. I felt a sense of relief knowing I was on my way to get help.

As soon as I went through the doors of the ER, a nurse came running up to me with a mask and said, “Quick, put this on immediately”. She also gave me a bag for vomiting because I was dry retching as I came in. Eventually, I was given a bed and taken into a sick bay where patients were separated by curtains. No one came to see me for about an hour and a half.

The first person I saw was the nurse. She took my temperature and blood pressure and said I was extremely dehydrated—so she hooked up to an IV for fluids. When the doctor came in, I told him immediately that my boyfriend had tested positive for novel coronavirus while he was in the hospital. If I hadn’t brought this up, I don’t think they would have tested me because I didn’t have a fever at the time.

But because I had been in direct contact with someone who’d tested positive and had every other symptom on list, the doctor gave me the test. And it was not fun. It’s a swab that goes really high up your nose. It was painful and uncomfortable, and I had a little bit of a bloody nose afterward. It’s not nice.

After being tested for COVID-19, I was also given a few blood tests and chest x-rays to check my oxygen and lungs. Twelve hours later, I was released from the hospital and told I would get my test results in a few days.

I was instructed to come back if I couldn’t breathe. Otherwise, I was given a printout on self isolation best practices and told I needed to quarantine for two weeks and three days. My boyfriend had been released from the hospital earlier that same day, so I went to home to him and we continued taking care of each other.

March 24: I posted to Instagram about my COVID-19 journey.

By this point, some of my symptoms had subsided and I didn’t feel completely horrible, so I decided to tell others about my experience. Strangers from the Australian relief dinner started reaching out to me and saying, “Oh, I was at this table, and I got sick, too,” or “You don’t know me, but I was at that dinner and I tested positive.” Everybody started coming out of the woodwork.

March 27: I got a call from the hospital confirming I’d tested positive for novel coronavirus.

When my phone rang that day, I knew it was the hospital. I picked up immediately, and a nurse told me that I’d tested positive for COVID-19 and to continue doing what I was already doing—isolating. When she gave me the results, I finally felt validated. Even though I’d known deep down that I had the virus, it felt good to finally have an answer—even if there was no treatment.

The days leading up to April 2, my nausea went away and I was finally able to start eating again. I couldn’t fully taste or smell anything yet, but I was hungry. My boyfriend and I stared off with the BRAT diet: bread, rice, applesauce, and toast. That’s all we could hold down. But at least we had our appetites back.

Finally, I started having the energy to do things like shower or start drawing again. I took a walk outside, keeping a safe distance from others, and I even began gardening.

On April 7, after my isolation period was over, I went out for a grocery store run. (Up until then, our neighbors had been leaving food at the door.) I put my mask and gloves on and walked to the closest market. I was shocked to see so many people in the store who weren’t distancing themselves and weren’t vigilant about sanitizing their hands.

I hope people read my story and take it seriously. I know my family and friends are more cautious than ever, now that they’ve seen what the virus can do. Anyone can be affected, and you can turn a corner for the worst very quickly. I should know since it happened to both me and my boyfriend.

From: Women’s Health US