Does being active make us ravenous afterward and prone to eating more than we perhaps should? Or does it blunt our appetites and make it easier for us to skip that last, tempting slice of pie?

A new study provides timely, if cautionary, clues. The study, which involved overweight, sedentary men and women and several types of moderate exercise, found that people who worked out did not overeat afterward at an enticing buffet lunch. However, they also did not skip dessert or skimp on portions. The findings offer a reminder during the holidays that while exercise has countless health benefits, helping us eat less or lose weight may not be among them. 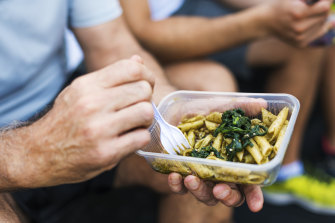 A new study suggests that moderate exercise does not have a significant effect on our appetites afterward, but there’s still no scientific consensus.Credit:iStock

For most of us, exercise affects our weight and hunger in unexpected and sometimes contradictory ways. According to multiple scientific studies, few people who start to exercise drop as many kilos as the number of calories they burn working out would foretell.

Some recent research suggests this occurs because our bodies stubbornly try to hang on to our fat stores, an evolutionary adaptation that protects us against (unlikely) future famines. So, if we burn calories during exercise, our bodies might nudge us to sit more afterward or reallocate energy from some bodily systems to others, reducing our overall daily energy expenditure. In this way, our bodies unconsciously compensate for many of the calories we burn exercising, reducing our chances of dropping weight by working out.

But that caloric compensation happens slowly, over the course of weeks or months, and involves energy expenditure. It has been less clear whether and how exercise influences our energy intake — that is, how many servings of food we consume — especially in the hours immediately after a workout.

The evidence so far has been mixed. Some studies indicate that exercise, especially if it is strenuous and prolonged, tends to blunt people’s appetites, often for hours or into the next day. This phenomenon prompts them to take in fewer calories at subsequent meals than they would had they not exercised. But other studies suggest the opposite, finding that some people feel hungrier after workouts of any kind and soon replace the calories they expended — and then some — with an extra helping or two at their next meal.

Many of those studies, though, relied on healthy, fit and active young men and women as subjects, since those groups tend to be in ready supply among students in exercise science departments at universities. Fewer experiments have looked at how exercise might immediately affect appetite and eating in older, overweight, sedentary adults, and even fewer have studied the effects of resistance training as well as aerobic exercise.

The new study was published in October in Medicine & Science in Sports & Exercise. Scientists at the University of Utah in Salt Lake City, the University of Colorado Anschutz Medical Campus in Aurora, Colorado, and other institutions advertised for volunteers in Colorado willing to exercise and eat, for the sake of science.

Winnowing hundreds of replies, they wound up with 24 men and women, ranging in age from 18 to 55, who were overweight or obese and generally inactive. They invited everyone to visit the lab first thing in the morning, fed them breakfast, and then, on separate days, had them sit quietly, walk briskly on a treadmill or lift weights for about 45 minutes.

Before, during and for three hours afterward, the researchers drew blood to check for changes in hormones related to appetite and asked people how hungry they felt. They also let everyone help themselves to an open buffet lunch of lasagne, salad, rolls, soda and poundcake with strawberries, while unobtrusively monitoring how much food people consumed.

Then the researchers compared hormones, hunger and actual eating and found odd disconnects. In general, people’s hormones shifted after each exercise session in ways that could be expected to reduce their appetites. But the study’s participants did not report feeling less hungry — nor did they report feeling hungrier — after their workouts compared with when they had sat. And at lunch, they ate about the same amount, about 950 calories worth of lasagne and the other buffet foods, whether they worked out or not.

The upshot of these results suggests that, at the very least, brisk walking or lightweight lifting may not affect our subsequent eating as much as “other factors,” such as the aroma and oozing gustatory delights of lasagne (or buttery rolls or pie), said Tanya Halliday, an assistant professor of health and kinesiology at the University of Utah, who led the new study. People’s appetite hormones may have dropped a bit after their workouts, but those drops did not have much effect on how much they ate afterward.

Still, exercise burned some calories, she said — about 300 or so each session. That was less than the nearly 1000 calories the volunteers consumed on average at lunch, but hundreds more than when they sat. Over time, this difference might help with weight control, she said.

Of course, the study has obvious limitations. It looked at a single session of moderate, brief exercise by a couple dozen out-of-shape participants. People who work out regularly, or who do more strenuous workouts, might respond differently. Researchers will need to conduct more studies, including those with more diverse groups and those that take place over a longer time period.

But even now, the findings have a gentle, apple-pie allure. They suggest “people shouldn’t be afraid that if they exercise, they will overeat,” Halliday said. And, she said, one holiday indulgence will not affect your weight in the long term. So, eat what you want at your feast and enjoy. Halliday also recommended going for a walk or joining in some other physical activity with your family and friends beforehand, if you can — not to blunt your appetite, but to boost your social bonds and to be thankful to be moving forward together.

This article originally appeared in The New York Times.

Make the most of your health, relationships, fitness and nutrition with our Live Well newsletter. Get it in your inbox every Monday.

Most Viewed in Lifestyle