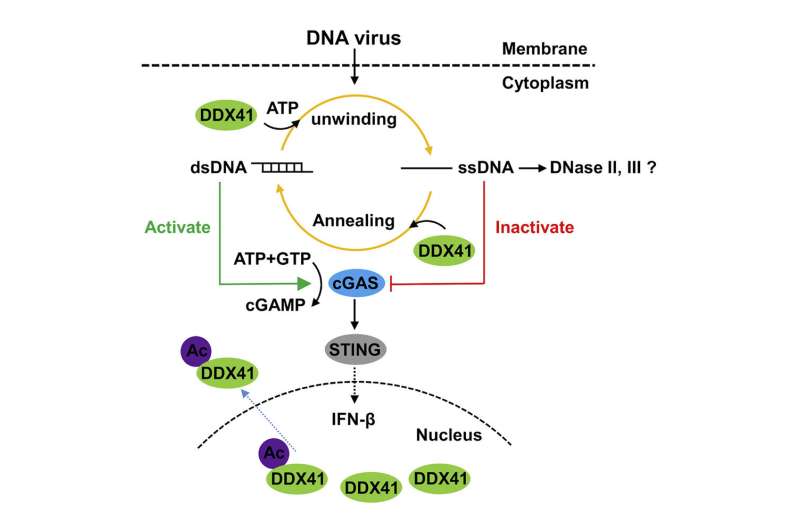 The body’s innate immune system, active from birth, is the first line of defense against viruses and other pathogens that cause disease. Using vaccination as an example, after receiving a vaccine, pain, redness, or swelling may occur at the injection site. This response is a demonstration of how the immune system is turned on, but also should be turned off on time so that side effects subside. Dr. Yuliang Wu (Ph.D.) from USask’s College of Medicine and his team are investigating how a gene known as DDX41 contributes to this immune system function, and how mutations in the gene can lead to two potentially fatal blood cancers—myelodysplastic syndromes (MDS) and acute myeloid leukemia (AML).

The basic function of DDX41 was discovered in 2011. Research identified that the gene likely plays a role in blood cancer development when the innate immune pathway is dysregulated. An important enzyme, known as cyclic AMP-GMP synthase (cGAS), is involved in detecting viruses in cells and eliciting an immune system response. However, cGAS is activated by DNA that is regulated by DDX41.

To better understand this process, researchers conducted experiments that involved directly isolating the DDX41 gene and observing its behavior when exposed to viruses.

“We found that the DDX41 gene is required for a cGAS-mediated immune response against DNA viral infections,” said Wu. “The DDX41 gene can cause the innate immune system to respond excessively, leading to blood cancer development. We have to point out we are not saying the virus causes cancers, because our innate immune system needs to respond to constant and different pathogens. Virus is just one of them, and what we want to say is that dysregulated immune response causes cancers.”

The results provide a starting point to understanding the ties between the immune system, genetics and the two types of cancer. Wu’s goal is to find drugs that target the DDX41 gene as potential treatment for the two blood cancers.

Wu said that finding effective treatments is a priority for researchers as both MDS and AML will become more prevalent within older populations as lifespans continue to extend.

“The next steps in this research are to identify molecules or chemical compounds with potential to modulate DDX41’s enzyme activity, and we could use these to turn on or turn off this pathway,” he said.