Disagree all you like! But, as millions across Britain adopt a sardine-like existence, you really can have a healthy argument

Millions of families across Britain are adjusting to a strange new existence. Kitchens have been turned into classrooms and spare rooms are now makeshift offices.

Perhaps the strangest, and for many, most uncomfortable new experience is that of usually busy, independent lives grinding to a halt. Instead of coming and going pretty much when and how we like, now we are shut in.

The strain this can potentially place on our mental health and relationships, say experts, should not be underestimated. 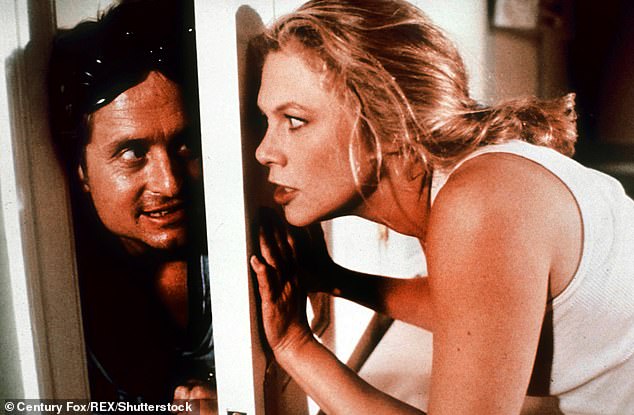 Loggerheads: Michael Douglas and Kathleen Turner as a bickering couple in War Of The Roses

In Wuhan, the Chinese city at the epicentre of the outbreak, hundreds of couples came out of a month-long lock-down and immediately separated. And last week, top divorce lawyer Fiona Shackleton predicted the same could happen here.

So how can you stop this sardine-like existence from destroying your marriage?

DON’T NAG – GIVE A NUDGE INSTEAD

We’ve all been there. Your partner seems somehow incapable of putting out the rubbish. So you make a snide comment and do it yourself. And all the while, a resentment builds up inside you before eventually you explode.

But this situation is easily avoided, according to relationship counsellor Andrew G. Marshall. In his The Happy Couple’s Handbook, the details an effective alternative to nagging. He says: ‘Try nudging, a concept that comes from politics, which means gently pushing people towards certain choices, rather than forcing it.

‘Set a new, equal default. For instance, whoever comes home from work first does the chore, instead of it being a favour.

‘This makes your partner feel like they have the freedom to opt out, rather than it being an order.

‘Reinforce the nudge by thanking them sincerely.’

Studies show that using praise and positive language is an effective way to change behaviour.

DIVIDE THE ROLES… AND THEN SWAP 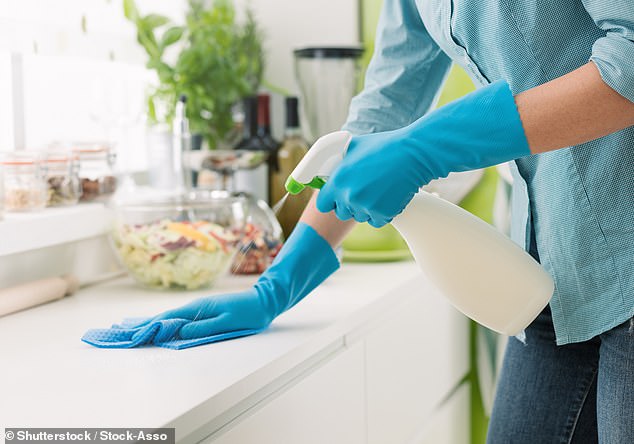 If one person would rather take on financial responsibilities or arrange the social calendar, let them, so long as it feels equal, writes Eve Simmons (file photo)

About a third of all arguments in British households are about chores, according to a 2017 study. ‘Morning meetings in the kitchen throw up plenty of fuel for a row – unwashed dishes, clothes not taken out of the tumble dryer, drinking the last of the milk,’ says Marshall.

To avoid squabbling over split milk – literally – draw up a timetable to split the control of different responsibilities equally.

And if one person would rather take on financial responsibilities or arrange the social calendar, let them, so long as it feels equal.

‘If the balance is uneven, discuss which areas can be divided up better,’ he says. ‘Decide who has the final say on each but always consult your partner. Be careful not to be little opinions.’

Plant your own lemon cucumbers, golden beetroot and rainbow radishes at home – and you’ll soon be able to enjoy bright and dazzling salads, without having to go to the shops. 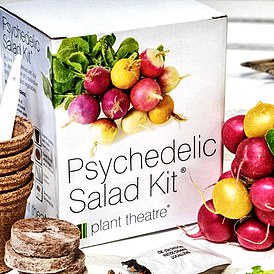 And to help each other understand the important of your respective responsibilities, try swapping roles at weekends. Marshall says: ‘If you normally take the children swimming, your partner should do it instead.

‘Ditto cleaning the bathroom or balancing the bank account. At the end of the weekend, relax and talk about your experiences of being each other, the insights gained and what you might do differently in the future.’

A KISS IS BETTER THAN A CLASH

It is in times of exceptional stress that the most inoffensive comment can send you flying off the handle. But acting in an opposite way to how your feeling can avoid an explosive row.

‘When you’re upset, the automatic response is to punish by withdrawing or criticising,’ says Marshall. ‘And your partner is likely to follow suit. Instead, lead by example and do something nice instead, like give them a kiss.

‘Before long, your partner will return the favour – and you’ve set up a positive cycle.’

And you don’t need to buy a bunch of roses or order their favourite takeaway to make someone feel special. ‘Just check in on them after a day’s work rather than big romantic gestures,’ advises Marshall.

REMEMBER, IT’S NOT ALL ABOUT YOU

If you do end up in the middle of a slanging match, there’s a tried and tested method that will defuse it as quickly as possible.

First of all, try to acknowledge something you both want to achieve from the conversation, says couple’s counsellor Dr Kalanit Ben-Ari. She also advises to avoid focusing on what the other person has done wrong, and instead report what you feel about it.

Try to separate the behaviour that has upset or irritated you from the person doing it. 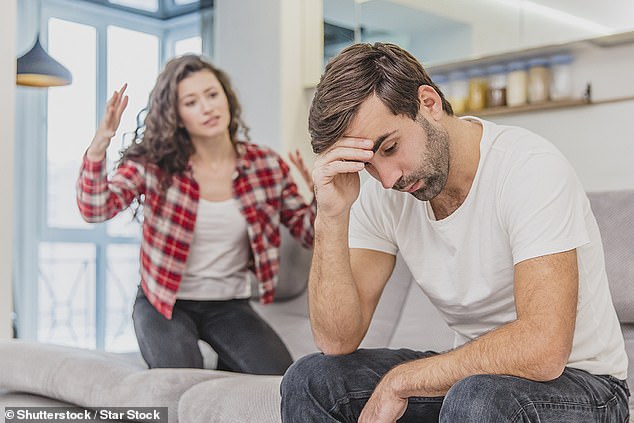 First of all, try to acknowledge something you both want to achieve from the conversation, says couple’s counsellor Dr Kalanit Ben-Ari (file photo)

Dr Sarah Vohra, a consultant psychiatrist in Nottingham, says: ‘Instead of calling someone useless or stupid, focus on the thing they did or said.

‘And let the other person speak, repeating back to them what they’ve said in your words, to show that you understand.’

Neither should people be needlessly stubborn, says US-based psychologist Dr John Gottman. ‘Do not continue fighting when you know you’re in the wrong.’

And if you really can’t reach an understanding, agree to approach the topic again when you’re both calm, says Dr Gottman.

AGREE A PEACE DEAL – AND STICK TO IT

There is truth to the adage of ‘never go to bed on an argument’.

‘Don’t let anything fester overnight – you’ll just have the same argument in the morning,’ says Dr Vohra. An easy way to fast-track to the end of the row is to divert the conversation to a practical solution. ‘It’s hard, but one of you needs to acknowledge that the argument has to end at some point – and neither of you wants to get more upset,’ says Dr Vohra.

‘Try to find a resolution. Agree to the deal and stick to it’.

And just because you argue, it doesn’t mean your relationship is doomed. Dr Gottman says: ‘The most successful couples refuse to accept hurtful behaviour from one another. If you’re feeling hard done by, don’t ignore it.’

Additional reporting by Angela Epstein. The Happy Couple’s Handbook, by Andrew G. Marshall, is in paperback. For details, go to andrewgmarshall.com.

What to read, watch and do 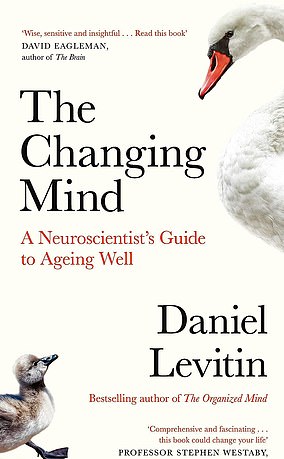 The Changing Mind: A Neuroscientist’s Guide To Ageing Well

With new evidence suggesting decision-making and happiness levels peak in our 80s, psychologist and leading neuroscientist Daniel Levitin explores what really happens to our brains as we grow old.

Coronavirus: Can Our NHS Cope?

Dispatches investigates the strain that Covid-19 is placing on doctors and nurses working in an already stretched NHS. 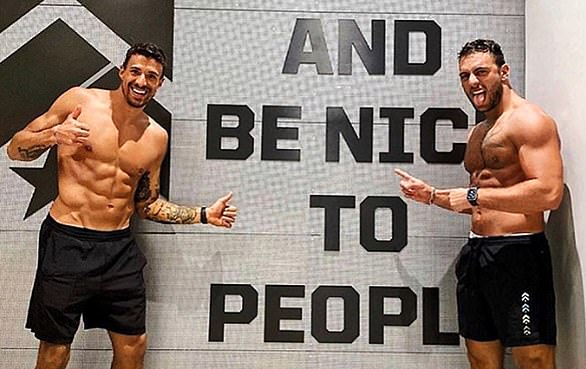 Barry’s Bootcamp, the gym loved by celebrities, is live-streaming exercise classes twice daily on its Instagram page – and you can do them in your living room. You can access routines from previous days by clicking on the IGTV tab.