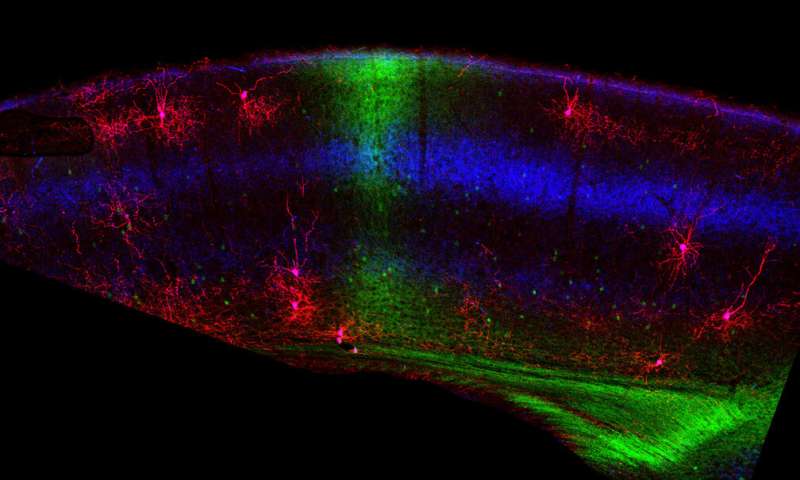 To prepare the brain for binocular vision and depth perception, first you have to take out some of the chandeliers.

That’s the takeaway from a group of neurobiologists who studied the development of binocular vision in the mouse brain. They discovered that chandelier cells, so-named because they have many long extensions that control the firing of hundreds of excitatory pyramidal neurons and resemble a chandelier light fixture, are selectively removed from the developing mouse visual cortex even before the animal’s eyes are open by a process of programmed cell death called apoptosis.

This pruning of about half of the chandelier cells in the second week of development probably clears a path for certain pyramidal neurons to be more active, since chandeliers tend to have a dampening effect on their excitability, explained Josh Huang, a professor of neurobiology in the Duke University School of Medicine. He led this research at his previous position in Cold Spring Harbor Laboratory on Long Island, spearheaded by postdoctoral fellow Bor-Shuen Wang. The findings appear Dec. 7 in the journal Neuron.

“Binocular vision requires fast communication between the two visual hemispheres that receive information in the center visual field,” Huang said. “What we think is that to allow that to happen, the area that mediates this fast communication needs to have reduced inhibition,” accomplished via fewer inhibitory chandelier cells.

The binocular vision enjoyed by mammals like mice and humans is a collaboration of the physical abilities of the eyes and the interpretative abilities of the brain, Huang said. “Many animals (such as a lizard) can see with both eyes, but their processing of visual information from each eye is largely separate. Only in most mammals is there a central part of the visual world that is seen by both eyes and it is the brain that has to combine the left and right visual images into a coherent single perception.”

Some of the binocular system is laid down by genetic instructions that build the structures of the visual pathways, but the finer visual circuits are shaped by visual experience.

“The whole process of brain development is a continuous process in which genetic information plays a major role in constructing larger scaffold of the brain network,” Huang said. “But later, there are learning- and experience-dependent processes that begin to customize many of the details of the brain circuits for each individual. The phenomenon we’re talking about is right at the juncture between the genetic-instructed and use-dependent mechanisms,” Huang said.

Adding to the complexity, the brain processes binocular vision in two different and coordinated ways, Huang said. As signals travel from the left and right retina to the thalamus, some signals cross to the other side of the brain, and others don’t, but they converge in the visual cortex, thereby contributing to binocular vision. The second path is that the left and right visual cortexes, receiving information from the retina, communicate through callosal neurons via the corpus callosum, a connection between brain hemispheres. That further sharpens binocular vision.