New York city parent Natalya Murakhver rips the decision by the schools, says this is ‘one big experiment’

The number of weekly pediatric COVID-19 cases fell just short of a pandemic record on Sept. 9, with more than 243,000 infections, according to the latest report from the American Academy of Pediatrics.

Pediatric COVID-19 cases have seen a recent exponential increase, the group notes, with nearly 500,000 cases added from Aug. 26 to Sept. 9, the most recent available figures. The latest report also reflects an almost 240% increase in weekly cases since late July, when 71,726 cases were reported. 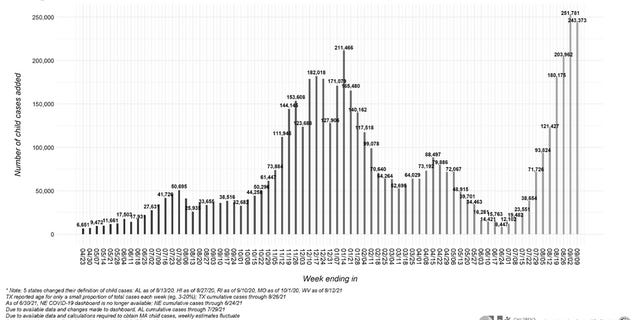 The pediatric group’s prior report, including data through Sept. 2, saw the number of weekly pediatric COVID-19 cases climb to the highest figure seen since the pandemic began, at 251,781 infections. The group continues to urge further research into the pandemic’s long-term impacts on kids, including physical, emotional and mental health effects.

Overall, over 5.2 million COVID-19 cases have been reported among children since the pandemic began, however infections resulting in severe illnesses is uncommon, the latest report reads.

The findings coincide with a continued surge in the rate of new hospital admissions for patients aged 0-17, which as of Sept. 5, reached 0.50 admissions per 100,000 population, according to data from the Centers for Disease Control and Prevention (CDC). In early July, the rate was approximately 0.07 per 100,000. Adults over age 70 hold the highest rate of new admissions at about 8 per 100,000. By late August, weekly cases per 100,000 were highest among teens aged 16-17, at 326.9, compared to all other age groups.

Children under age 12 remain ineligible for COVID-19 vaccine, though shots could become available later in the fall. Dr. Scott Gottlieb, former FDA commissioner and Pfizer board member, told CNBC that Pfizer will likely request emergency approval for use of its vaccine among kids aged 5 to 11 in October, with potential authorization by late fall or early winter. Meanwhile, Moderna’s trial data for kids ages 5-11 could come by late fall or early winter, Insider reported.

“The FDA is working around the clock to support the process for making COVID-19 vaccines available for children,” the Food and Drug Administration wrote in a Sept. 10 statement, adding in part, “this process is complex and relies on robust manufacturer trials and data.”