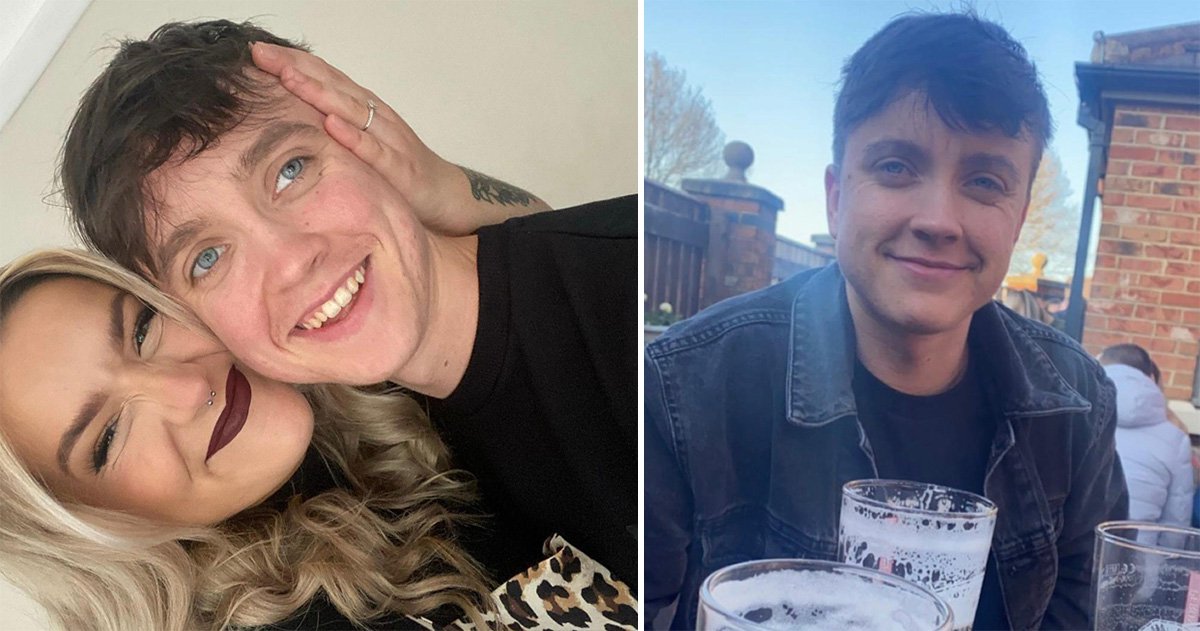 A trans man is working all hours to save for surgery which he says would transform his life.

Costa shift manager Sean Williams works over 50 hours a week in an attempt to save for private medical costs because he says he can no longer live in ‘extreme discomfort.’

After three years, the 24-year-old from Stockton is still yet to have his first appointment with the NHS.

‘As I grew older, I realised who I am,’ says Sean.

Sean says he knew he was trans when he was around 11 or 12-years-old but he began transitioning in early 2018 when he was 19.

He has been diagnosed with gender dysphoria – a mismatch between biological sex and gender identity which can cause distress and discomfort.

Sean now hopes to marry his fiancée of one-year, Eve, but wants to feel happy and confident when they walk down the aisle, and he dons his first suit.

He says: ‘I didn’t tell anyone I went to the doctors and confessed how I felt.

‘I just said I’m this way and something needs to change otherwise I don’t see the point in being here. I wanted to get it off my chest and start living.’

Despite coming to terms with his identity, Sean says he was very lonely and spent a lot of time on his own.

‘I was going to work a lot to keep my mind busy,’ he says. ‘If I wasn’t busy I would have crumbled.’

After going to the doctors to start the transitioning process, Sean was told there was a very long list and referrals could take years.

However, within a couple of weeks he was shocked to receive his referral letter and admits that he got a little bit excited.

But after three years, Sean, who now lives in Redcar, is still yet to receive an appointment.

‘I just carried on with work. I was working all through it but at times it got really tough. I couldn’t cope with how I felt. Two years had gone by and I hadn’t heard anything at all.

‘I got to a really low point, I expected to hear back.’

Then as the Covid pandemic gripped the country, Sean became depressed and says he knew something needed to change.

Sean decided to access private healthcare – which is costing more than £100 per month – but says he feels ‘lucky’ to be able to afford it.

He is desperate to undergo top surgery which is estimated to cost around £10,000.

Sean works 50 hours over six-days per week in order to save for surgery and afford his living costs. He even takes two trains to Hartlepool to get to work.

He adds: ‘The NHS waiting times can take up to four to five years now for a first appointment and they’ve recently removed bottom surgery for trans men.’

Sean, and his partner Eve, set-up a GoFundMe page to help with costs of his top surgery.

Eve created a video about the couple’s decision on TikTok which has received thousands of views.

The couple hope to tie the knot in 2023 but say getting the surgery for Sean is their first priority.

‘I’m transgender and have been since I can remember,’ reads the GoFundMe page.

‘I understand that this is a long shot and plenty others are in the same boat but it’s worth a try.

‘Due to still not having a first appointment with the NHS after three long years; I have had to make the decision to arrange private surgery as I can no longer live in extreme discomfort and with the constant, gruelling battle of body dysphoria.

‘I want to marry my fiancée so we can finally begin moving forward in our life together.

‘I want nothing more than to feel happy and confident in my first suit
when we say ‘”I do”.

‘So, if you could please help me in paying for my top gender-reaffirming surgery, Eve and I would be eternally grateful for your contribution to the first days of the life we can finally begin living.’

Get in touch by emailing [email protected]