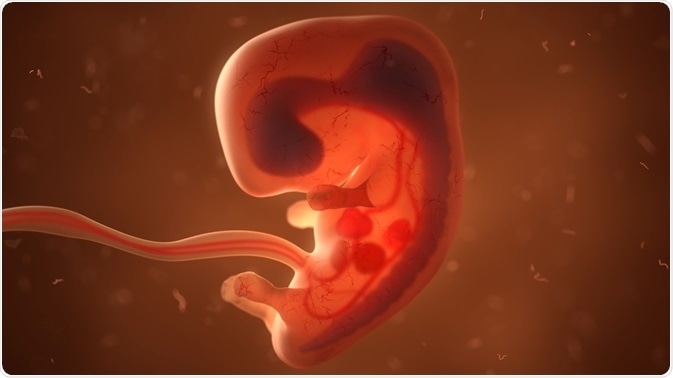 In the context of mammals, the egg cell is preserved by an extracellular matrix, made mainly of a group of glycoproteins called ‘zona pellucida’. Once a sperm cell is able to bind with the zona pellucida layer, a cascade of biochemical events takes place: the acrosomal reactions.

In the context of placental mammals, the acrosome consists of digestive enzymes that are used to initiate the break-down of the extracellular matrix surrounding the egg, thus allowing the cell membrane of the sperm to fuse with the egg.

The joining of these two cellular membranes forms an opening in which the sperm cell nucleus can be transferred into the center of the ovum, where the nucleus membranes of both the sperm and egg cells begin to degrade, with the two haploid genomes coming together to form a singular diploid genome.

The cleavage and blastula stage

The initial growth stages of multi-cellular organisms start with a zygote cell, which then undergoes fast cell division to form the initial cell cluster, or ‘blastula’. This rapid division of cells is known as the process of ‘cleavage’. Once the cleavage process has produced well over 100 cells, the developing embryo is called a blastula.

This blastula is typically a spherical layer of cells, otherwise known as the blastoderm, which surrounds a fluid-filled cavity: the blastocoel. Mammalian embryos form a new structure termed the blastocyst at this stage, which can be characterized by a mass within the cells that is obviously distinct from the outer blastula region.

During the rapid cleavage process, the cells have been found to divide without increasing the total mass, meaning that this process is simply one large single-celled zygote that divides itself into several smaller cells. Each of these cells within the blastula can be called the blastomere.

The type of cleavage that occurs within the developing embryo is dependent upon the volume of ‘yolk’ that forms inside the egg itself. In placental mammals, which include human beings,  where nourishment is solely provided by the mother’s own body and blood supply, the eggs only have a very small volume of yolk, and thus undergo a type of cleavage called ‘holoblastic cleavage’.

Other species of animals undergo a process called meroblastic cleavage, for example, birds, that have more yolk inside the egg sack that is used to nourish the developing embryo,.

In mammalian embryos, the blastula develops further to form a blastocyst in the next stage of its initial development. At this stage, the cells inside the blastula begin to arrange themselves into two separate layers: an outer layer termed the trophoblast and an inner cell mass.

The inner cell mass can also be known as the ‘embryoblast’, with this mass of cells continuing to develop and form the full embryo. At this stage of the development process, the inner cell mass has been found to consist of the embryonic stem cells that will soon come to differentiate into the many different cell types that are needed by the organism to function.

The next stage of the development of embryos is the basic conception of the body plan. The cells within the blastula structure rearrange themselves to finally form three distinct layers of cells in a process known as ‘gastrulation’.

During this stage, the blastula proceeds to fold in upon itself to form those three distinct layers of embryonic cells. Each of these new layers is termed a germ layer, with each germ layer differentiating into a different organ system within the body.

Once these three layers have become fully established and start to develop separately, the body begins to form, and the embryo becomes a fetus. There are many structural genes utilized in this specialization process, where if there are any mutations, parts of the body can grow in the wrong place (for example, organs growing outside of the body instead of under the skin), or it can cause miscarriage of the embryo.

Phoebe Hinton-Sheley has a B.Sc. (Class I Hons) in Microbiology from the University of Wolverhampton. Due to her background and interests, Phoebe mostly writes for the Life Sciences side of News-Medical, focussing on Microbiology and related techniques and diseases. However, she also enjoys writing about topics along the lines of Genetics, Molecular Biology, and Biochemistry.